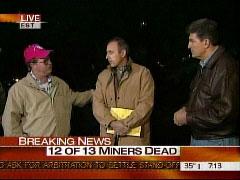 Once in a while, it happens. TV serves up human drama in real time. So it was on this morning's Today show, when the bereaved son of one of the Sago miners confronted the governor of West Virginia over allegedly lax safety enforcement in the mine.

Matt Lauer began with a stand-up interview at the disaster site of WV Governor Joe Manchin. Lauer then brought in John Bennett, the adult son of Jim Bennett, one of the miners who died.  Bennett stood at Lauer's other side.

Bennett described the history of violations in the mine. Lauer turned to Manchin to inquire about the violations. Manchin had launched into his response when Bennett took matters into his own hands.

Bennett, wearing the red cap in the photo here, spoke across Lauer directly to Manchin:

"With all these roof falls and everything that has happened over the multiple months, not weeks, months, that this has happened," Manchin began to reply when Bennett again cut him off: "and they still send men in there?"

It was a poignant moment, as one's heart when out to the son. At the same time, it was an ultimate political moment: a politician on live national TV confronted by a bereaved constituent suggesting the governor's responsibiity for the death of his father and others.

Manchin remained calm and, without directly responding to Bennett's question, described the seals in the mine that had been blown out.

Lauer followed with an apt question to Manchin of his own: "when the average person across the country hears that this mine had been cited for 46 violations as recently as late December, it is hard to understand why it was open for business on Monday when that explosion occured."

Manchin replied by stating that even one fatality is too many, that mining is an inherently dangerous operation, and by mentioning that his own family had suffered a mining death [his uncle was killed in an infamous 1968 disaster in which 78 miners died]. "I know exactly how the families feel. I've been there."

Lauer turned back to Bennett, who seemed on the verge of putting another question to Manchin, when Lauer deflected it, asking Bennett "what questions would you like to put to the mine operators?" Bennett paused, palpably changing directions, and suggested that, for fear of losing their jobs, the men were afraid to speak out about the unsafe mine conditions. Bennett decried the absence of the United Mine Workers to protect the men in the non-union Sago mine.

Bennett conducted himself with dignity, as did Manchin, who is clearly in the crisis of his political life. There were no winners or losers, simply a spontaneous human moment, brought to us in real time.