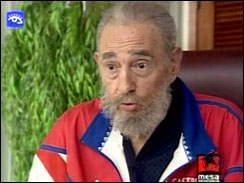 Dictator-groupies Sean Penn, Harry Belafonte and Danny Glover are at it again. They are among the “artists, scholars and performers” calling themselves “representatives of the cultural sphere in the US,” who sent a letter to President Bush asking him to “end the travel ban,” allowing a cultural exchange between nations.

Most troubling is the group did not address Cuba's lack of freedom and limited their travel demands to Cuba's “artists and scholars.” That wasn't a mistake. As faithful fans of the Cubano Dear Leader, they don't care about all Cubans' ability to travel, just those carefully-selected Party-approved “artists and scholars." Under heavy guard, of course, to avoid more embarrassing defections.

The December 1 Post-Chronicle, an online paper, excerpted the letter (bold mine):

The duo is among the artists, scholars and performers who sent a letter to Bush on Tuesday (27Nov07), asking the President to consider lifting travel restrictions on U.S. and Cuban artists.

In the letter, the collective artists write, "We are writing you as representatives of the cultural sphere in the U.S. We write you as American citizens. We write to express our dismay at your administration's continuing hostility towards Cuba."

Cuban artists aren't allowed to leave their country, unless it is in the dark of the night, strapped to a home-built raft, praying they don't get caught and sent to prison. Addressing the travel ban is a legitimate policy question worthy of debate but this letter is just more Castro-friendly propaganda that keeps Cubans in chains.

Apparently unconcerned about the ability for the average Cuban to associate freely, dissent or even read unapproved books, Penn, Glover and their fellow artistes want a free cultural exchange with Cuba, but that's hard to do when the culture is controlled by the State.

After bizarrely whining that Bush is denying their Constitutional rights, they listed their demands but said nothing about Cuba's lack of freedom:

As citizens, artists, scholars, educators and cultural workers from all artistic practices, academic disciplines, advocacy and service organizations in the arts, we hope you will read and consider the words of Alicia Alonso as we call upon your Administration to:

1. open a respectful dialogue with the government and people of Cuba in accord with established protocols supported by the community of nations;

2. end the travel ban that prevents U.S. citizens from visiting Cuba and allow for Cuban artists and scholars to visit the United States, thus eliminating the censorship of art and ideas, and

3. initiate, by working with appropriate members of Congress, a process that can result in the development of normal bilateral relations between our countries.

So, why not demand the ability for all Cubans to travel to America to share in these cultural exchanges? I guess for these elite Castro-lovers, a political apartheid is in effect. Only those who agree with Castro are allowed tiny crumbs of freedom

What about the dissidents? Would they be allowed to leave? Would the jailed librarians, journalists and writers be released from prison so they too can travel to America and explain their view of Castro's Cuban culture?

Lynn contributes to NewsBusters and can be reached at Tvisgoodforyou2 AT yahoo.com