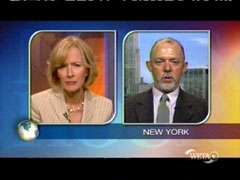 Barack Obama’s overseas trip has garnered an incredibly large amount of media attention, especially with the three broadcast network anchors going along for the ride. But lately, some are beginning to recognize the “Obamania” present within the mainstream media, including members of the media themselves.

On the July 25 edition of “News Hour with Jim Lehrer,” PBS joined in on the acknowledgement that media coverage of Obama has been unprecedented and overwhelming as Senior Correspondent Judy Woodruff discussed the media coverage of John McCain and Barack Obama with Andrew Tyndall, publisher of the Tyndall Report, and Tom Rosenstiel, director of the Project for Excellence in Journalism.

Before the guests appeared, Woodruff recounted the media attention given to Obama’s overseas trip, noting that the press corps following Obama was “larger than usual” and that late night comics had even poked fun at the adoration members of the media have shown for Obama.

Rosenstiel, responding to a request by Woodruff to size up the coverage of Obama’s trip, observed, “This is more akin to a presidential trip than a candidate trip.”

Andrew Tyndall then chimed in and contended that the broadcast network anchors following Obama smelled of a coronation:

Well, the thing I think that really emphasizes Tom's point about it being treated as a head-of-state trip rather than a candidate trip was the extraordinary decision by the broadcast networks to send their anchors along to interview him on the way. It's entirely unprecedented that a premier candidate should be treated with this type of coverage. That really is reserved for heads of state. And even though I think the tone of the interviewing was actually really quite hard-edged by all three anchors, the fact that they sort of dignified this trip with their presence had a little smell of a coronation about it really before the election has actually happened.

Following up on this, Woodruff asked if it was a mistake for the three broadcast network anchors to follow Obama. Tyndall concurred, asserting, “The regular campaign correspondents could have covered it perfectly well and taken care of all the journalistic business that needed to be taken care of.”

Reiterating the findings of a recent Project for Excellence in Journalism study, noted by NewsBusters’ Editor Matthew Sheffield, Rosenstiel also explained that Obama has received significantly more coverage than John McCain and, accordingly, the media have given Obama an advantage:

One of the things that is the backdrop behind this is, in the first six weeks of this general election phase, in our estimate, 78 percent of the stories that we've studied have featured Obama as a significant presence in the stories, and 51 percent have featured McCain. Obviously, stories can feature both candidates in a significant way. That's a 50 percent advantage for Barack Obama. Exposure doesn't guarantee success, but it is a necessary ingredient to success, and Obama has more of that ingredient right now. And this trip helps, even if its questions are tough, if you handle those questions effectively.

In response to a probe by Woodruff about the responsibility of journalists to equalize coverage of the two candidates, Rosenstiel argued that even if Obama is more newsworthy than McCain, the media must be careful to not tilt the situation in favor of Obama:

I think there is a problem potentially if the press creates what is, in effect, an un-level playing field. Unlike other news events, the news media are, in a sense, the job interviewers on behalf of the public in a presidential campaign. And I think we have to worry, as journalists, if we disadvantage one candidate consistently over a long period of time.

But I do think that, even if newsworthiness justifies a lot of this, there is another concern that journalists have to be worried about, which is, in effect, tilting the situation so that McCain doesn't have as fair a shot.

And, ending the segment on the note that Obama is getting unprecedented treatment by the media, Tyndall declared:

The phenomenon that we're talking about here is not that McCain is being ignored, that he's not able to get his word out in the mainstream media. It's that this thing, Barack Obama, is head and shoulders a different category of treatment of a candidate that we've ever seen before. So it's not that McCain is getting the short end of the stick. It's that -- you know, Obama is not getting a stick. He's getting a different category. He's getting a log, not a stick.

Now that even PBS has acknowledged the glowing media treatment of Obama, will the rest of the mainstream media follow suit? And more importantly, will they begin to be more fair and balanced, or will they stick to their gushing ways to help their candidate of choice?

To read the entire transcript of the segment, click here.