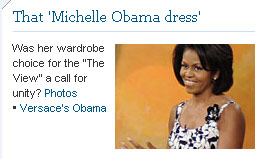 Shortly after Michelle Obama’s appearance as a guest host on ABC’s the View, her choice of clothing began attracting media attention, turning political and general assignment journalists into fashion critics. NBC’s Today show claimed that "fashion icon" Obama had started a "frock frenzy." Before that, NBC's Lee Cowan, who has said covering Barack Obama makes his "knees quake," gushed that "Michelle Obama had always been there, dressed as brightly as her husband's smile."

Donahue’s June 23 article, "That 'Obama Dress,'" makes it seem like Obama's choice of fashion has more to it than just looking good, it's highly symbolic as well: "Pundits will wonder whether it was a reference to 'ebony-and-ivory unity,' Slate.com said, also pointing out that the brand's name, White House/Black Market, points to Pennsylvania Avenue."

Obama disclosed that, on this occasion, she was wearing a $148 print dress from White House/Black Market, accented with a brooch. . . . I'd guess this down-to-earth wardrobe choice might simply be part of a broader effort, by her husband's campaign, to soften her image and make her more relatable. I'll admit it works for me.

A $148 dress is "down-to-eart"? How many "down-to-earth" women can afford to go out and pay that much for one dress?

Donahue even seemingly urges readers to buy the dress saying that "You might still be able to find 'the Obama dress' at White House/Black Market, one of my secret sources of always affordable, updated classics (mostly in black and white, as you might guess) and great shoes."

Of course, White House/Black Market isn’t exactly a friendly neighborhood, down-to-earth clothing store. It is more of a fancy women's boutique. Dresses featured on the Web site range in price from $88 to $298.

Perhaps Donahue is just mimicking the style in vogue with her counterpart at the Washington Post, fashion editor Robin Givhan who has generally used her columnist’s pen to skewer conservatives while gushing about liberals’ sartorial sense, particularly that of the Obamas. After Barack Obama's speech in , Givhan wrote about Michelle Obama’s purple dress:

The choice of violet stands out because it's not one of the primary colors so beloved by political spouses. Historically, it's regal. Today, it's fashionable. Michelle Obama seems to choose her hues based on what looks best on her, ignoring the political how-to manual. And so it's no surprise that we should see colors like violet -- or chartreuse -- that are atypical. She is not standard first lady material. She is a black woman dressing to flatter her skin tone. Can shades of pumpkin or mustard be far behind?