Was WikiLeaks Leaker Lashing Out Against 'Don't Ask Don't Tell'? 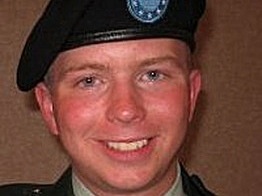 Army Spc. Bradley Manning may face some serious charges for allegedly leaking tens of thousands of classified military documents to the website WikiLeaks. The leak could have serious consequences for the war effort. Former Chairman of the Joint Chiefs Adm. Mike Mullen claimed that WikiLeaks "might already have on their hands the blood of some young soldier or that of an Afghan family."

In investigating the leak, will the media explore every plausible motivation on Manning's part, even in spite of strong resistance from the forces of political correctness? We're about to find out.

Manning was openly gay, and possibly transgendered. The UK Telegraph gleaned a number of posts from his Facebook page in which he expressed what seems like intense depression, and occasionally disdain for the US military. There is evidence that he took part in protests against the military's "Don't Ask, Don't Tell" policy.

Did he leak the information in question as an act of protest or vendetta against military policies of which he disapproved? It's not at all clear. But shouldn't the mainstream press at least note that possibility?

The evidence of that motivation, mind you, is at this point far from conclusive. But given the evidence, it is appropriate to pose the question.

The US Army intelligence analyst, who is half British and went to school in Wales, appeared to sink into depression after a relationship break-up, saying he didn't "have anything left" and was "beyond frustrated".

In an apparent swipe at the army, he also wrote: "Bradley Manning is not a piece of equipment," and quoted a joke about "military intelligence" being an oxymoron…

Mr Manning, who is openly homosexual, began his gloomy postings on January 12, saying: "Bradley Manning didn't want this fight. Too much to lose, too fast."

At the beginning of May, when he was serving at a US military base near Baghdad, he changed his status to: "Bradley Manning is now left with the sinking feeling that he doesn't have anything left."

Five days later he said he was "livid" after being "lectured by ex-boyfriend", then later the same day said he was "not a piece of equipment" and was "beyond frustrated with people and society at large".

His tagline on his personal page reads: "Take me for who I am, or face the consequences!"…

Pictures on Mr Manning's Facebook page include photos of him on school trips during his time in Wales and at a gay rights rally, where he is holding up a placard demanding equality on "the battlefield".

The only relevant issue is Manning's motivation in committing the alleged offense - the rantings on his Facebok page provide a key insight into a possible motivation that any responsible reporter would be remiss in dismissing out of some concern for political correctness.

Of course the media has not been keen on drawing out possible motives when the explicit mention of those motives could offend some protected group.

We saw the same trend after the Fort Hood shootings, when journalists simply could not bring themselves to proclaim that Maj. Nidal Hasan was a Muslim and motivated by his faith. He may have yelled "Allahu Akhbar" while opening fire on unarmed servicemen, but the first five media outlets to report on the shooting didn't mention the shooter's religion.

Chris Matthews wondered whether it was "a crime to call al Qaeda" - as Hasan had - and CNN actually misquoted a soldier shot by Hasan to cast doubt on the cries of "Allahu Akbar".

So far in the case of Bradley Manning and WikiLeaks, the mainstream press seems similarly averse to even considering the possibility that the Army Specialist was acting out against military policy to which he was strongly opposed.

Ace contends that "If it doesn't advance The Narrative, it never really happened," and that the press will remain silent. Is he right? We'll see.
Media Bias Debate Sexuality Fort Hood Shooting Bradley Manning