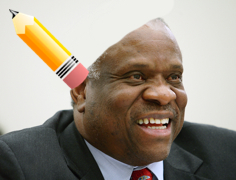 Few, however, would have the (dare I say it) audacity to lump prominent and accomplished African American political figures in with oppressive genocidal dictators and serial killers.

But TheRoot.com, a blog owned by the Washington Post, seems to have no qualms about doing so, as evidenced in its list of 21 "Black Folks We'd Like To Remove From Black History". Among the names are Supreme Court Justice Clarence Thomas and Republican Party Chairman Michael Steele.

Yes, apparently being right-of-center and of African descent puts you on par with murderers and dictators.

"We're sure that, at first, the 12 blacks who still claimed to be Republicans post-Bush were full of glee about his election," TheRoot says of Michael Steele. "Unfortunately, Steele has since morphed into the Bozo of politics. Too bad for him and the GOP that the only people laughing are the ones on the other side of the political aisle."

Why that makes him worthy being scrubbed from the history books remains unclear. Oh, right, he's a black conservative, so he doesn't serve TheRoot's agenda. Begin the scrubbing. Or is that purging?

Apparently TheRoot also considers belief in a racially blind judiciary, a rejection of identity politics, and an aversion to welfarism to be sins worthy of listing right along side genocide and political oppression. Or so one might gather from the website's venomous description of Justice Thomas:

Although he's only the second man of color to serve in the Supreme Court, the Backstreet Boys have more standing in the black community than Clarence Thomas. That's because he looks to the Constitution as "colorblind," says he's a man who just happens to be black and opposes government programs intended to help minorities. I'm not sure if the late Thurgood Marshall would want to pop Clarence 'side his head with his gavel, but there are plenty of blacks who would volunteer to do it for him.

It's quite telling that it took a felony for a Democrat (disgraced former DC mayor Marion Barry) to make the list, but Thomas gets there solely due to his decidedly conservative views. That's the only reason. He's a conservative, so he needs to be scrubbed from "Black History".

As Sonny Bunch notes at the Weekly Standard,

...there's a huge difference between admitting to being embarrassed of Democrat who was caught in a FBI sting doing crack, muttered "Bitch set me up" as the feds burst through the door, and served time in prison as a result -- to say nothing of his myriad tax problems and, most recently, blatant corruption in D.C.'s contracting process -- and being embarrassed about the GOP entries on the list.