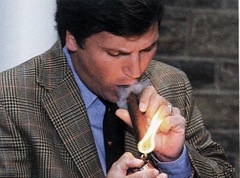 "Not in sync with the current program" is how former CNN host Tucker Carlson describes his new website, the Daily Caller, which is scheduled to launch Monday. Designed as a conservative answer to the Huffington Post, the Daily Caller will do what few center-right blogs have attempted: report hard news.

Carlson and his partner, former Dick Cheney aide Neil Patel, have raised $3 million in startup capital for the site, according to the Washington Independent. That impressive sum is enough to keep the Daily Caller operating for about a year. The site will employ a reporting staff or 21 in its Washington, D.C. office.

With Andrew Breitbart's Big Journalism, which launched earlier this week, Carlson hopes to be on the cutting edge of a new effort on the right to circumvent major media outlets--and overcome the significant obstacles to conservative news of traditional media outlets.

Many commentators are confident in Carlson's abilities as a trailblazer, and the Daily Caller already has a number of features lined up. The Washington Independent reported,

Carlson and his staff are spending the final hours before the launch polishing off content that can break out of the gate — exclusive interviews, lists like the Top 15 Most Wasteful Stimulus Projects, and short features from think tankers and established politicos. Arianna Huffington will have one of the first pieces on the site. Carlson, who started his career as a magazine writer, is working on an investigative piece for later. When Carlson talked to TWI on Wednesday, he had a wallet full of business cards handed to him by excited political candidates, Tea Party activists and PR flacks who’d heard him speak at Grover Norquist’s weekly meetings of the conservative movement. It was the first time, said Carlson, that he’d ever gone to the meeting. He wanted as much news, and as many stories, as possible. Whether they came from ax-grinding researchers or established reporters didn’t much matter.

“If there’s a story whose facts are verifiable, and it generates interest, and it comes from Satan himself, I will take it and I will pay him a reporting fee,” Carlson said. “But if we take a piece from Satan, that does not mean we’re on board with Satan’s agenda. It just means that the provenance of the piece, the origins of the piece, is not the most important thing. People don’t give you stuff because they love journalists. They give you that stuff because they’re pushing an agenda.”

The Daily Caller promises to be a vital part of the right's online presence. Though we at NewsBusters maintain the value of exposing liberal bias in the news media, alternative sources of news must be available to truly circumvent that bias.
Media Bias Debate Covert Liberal Activists Corporate Liberalism Bias by Omission Online Media Blogs Huffington Post Government & Press Journalistic Issues