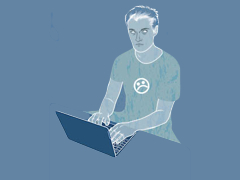 Remember all those blog posts from the Atlantic's Andrew Sullivan bashing Sarah Palin for employing a ghostwriter? Well, it turns out many of those posts may have been written by...a ghostblogger! Apparently Sullivan's busy schedule prevented him from writing everything on his site, so, without informing his readers, he employed a few ghostbloggers to write in his name.

Daily Dish readers were surely surprised at the announcement--posted by one of the ghostbloggers on Saturday--given Sullivan's insistence that his "one-man blog" is "honest" and "personal". They may have been a bit perturbed to learn, in Ace's words, that "half the blog isn't personal to Sullivan at all, and all of it is dishonest."

As always, it a pleasure to step in while Andrew gets some much needed rest. Guest-blogging is not all that different than my day-to-day activities on the Dish – 24 of the 50 posts currently on the front page were written by me. All the substantive posts are Andrew's work, but it's my and Chris's job to read through the blogosphere and pick out the choicest bits. Andrew edits, approves, and spins what we find, but the illusion of an all-reading blogger is maintained by employing two extra sets of eyes.

"As always"? "24 of the 50 posts"? Ghostwritten posts were hardly an insignificant element of Sullivan's blog.

The Daily Dish crew also seemed to conclude that Vincent's previous work might have some bearing on the content or message of "Going Rogue". But Appel wrote in response to some angry comments from readers requesting that the Dish staff start using bylines, "If Chris and I were forced to byline the posts we write under Andrew's supervision, we would have to own those opinions and draw contrasts with Andrew."

So you're saying that you may be writing for Sullivan, but the opinions are his and therefore it would be misleading to include your name above the posts? Might that be the same reason "Going Rogue" didn't say "Lynn Vincent" on the spine? For a site that has suggested Vincent's views might sneak their way into "GR", the Dish certainly seems comfortable neglecting to attribute the works of ghostbloggers to their actual authors.

The Daily Dish now includes bylines on every post, despite Appel's claims that they would make the blog "read funny" (they don't).

Sullivan wrote in 2007, "the term hypocrisy is bandied about far too easily these days. ... it means someone who knowingly violates his own publicly professed principles in private." Right, like criticizing someone for hiring others to write in her name, then doing the exact same thing. In fairness, this definition may have been penned by a ghostblogger.
2008 Presidential Liberals & Democrats Double Standards Blogs Atlantic Andrew Sullivan Sarah Palin