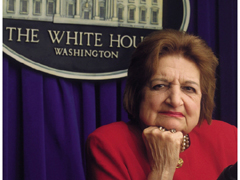 Despite all the campaign assurances that he would see the Afghan war effort through, liberals are incensed that Obama is following through on his pledge to, you know, win. The latest lefty to excoriate the president for pursuing America's enemies abroad is veteran White House correspondent Helen Thomas, who today lamented that Obama must now be dubbed a "war president."

"Obama should remember his own battle cry and tell the hawks: 'Yes, we can,' " Thomas wrote today in her syndicated column for Hearst Newspapers. Maybe he should also remember his insistence that Afghanistan "is not a war of choice. This is a war of necessity."

And he has remembered those wise words. But his supporters, who flocked to the "good war" cause as way to contrast Democratic national security efforts with the supposedly ill-intentioned Iraq war--and rip on George Bush in the process--have exhausted the political usefulness of Afghanistan, and are now calling for withdrawal.

In fairness, Thomas has been a consistent advocate of premature withdrawal from Afghanistan. But Obama pledged on the campaign trail to see the effort through, so saying he is only now becoming a war president is a bit revisionist--he has been a war president since he was elected!

She made sure to point out in her column that it is possible to gracefully withdraw all troops. "There is a precedent for strategic withdrawal. President Dwight D. Eisenhower...withdrew most U.S. troops from Korea and settled for an armistice with Pyongyang."

But wait, don't we still have troops in South Korea? The United States still retains a troop-presence of roughly 30,000. A Korean-style withdrawal would leave thousands of troops in Afghanistan for decades. So Obama's plan for a drawdown beginning in 2011 is actually in line with Eisenhower's Korean strategy: withdraw the major fighting force but leave ample troops to keep the nation secure.

The Korea example is all the more perplexing since Thomas has advocated complete withdrawal from Iraq and Afghanistan since the Bush years. "Bush should swallow his pride, acknowledge a colossal mistake, restore our moral image on the international stage and set the nation on a peaceful course in the 21st century" by withdrawing from Iraq, she wrote in 2006.

On Afghanistan, Thomas insists that the war is unwinnable. She wrote over the summer, "Maybe the president should have asked the Russians on his recent journey to Moscow how it was that a superpower like the Soviet Union could have been forced to retreat from Afghanistan in the 1980s, despite its modern military might." The title of her column asked "Can America prevail on Afghanistan/Pakistan front?" and answered, "No!"

In this column she pined that the Afghan effort is now Obama's war--"big time." She seemed distraught that Obama, a "neophyte," had "taken on the mission defined by the Bush administration, apparently without hesitation."

Thomas's lamentations echo the recent outcries from many liberals who apparently thought that Obama's Afghanistan promises were made to be broken. Michael Moore sobbed on Larry King Live last week that Afghanistan will "be his Vietnam if he doesn’t change his mind here. This isn't going to work."

Far-left Obama supporters are realizing that the president is not as radical as they are...or as he used to be. Senator Obama was one the of the most vocal critics of the Iraq war--and the Bush administration's "surge" strategy there. Of course it's easy to attack a war effort until you are the one responsible for it.

Thomas gibes that "It must have been tough for the president to prepare a persuasive speech in accepting the Nobel peace prize on Thursday while escalating a war in Central Asia." Well, not really. As the president stated in his speech,

A nonviolent movement could not have halted Hitler’s armies. Negotiations cannot convince al-Qaida’s leaders to lay down their arms. To say that force is sometimes necessary is not a call to cynicism, it is a recognition of history...

The belief that peace is desirable is rarely enough to achieve it.

This sentiment is that of a truly pragmatic president; peace is all well and good, but it does not just happen. Nations that truly want peace must strive for it--forcefully at times. Since he has assumed control of the nation's military efforts, Obama has come to understand this reality. His supporters on the left, however, are still stuck in 1968, drowning in their own anachronistic cliches.
Iraq War on Terrorism Middle East 2008 Presidential Afghanistan Larry King Live