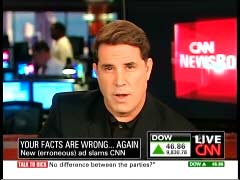 CNN's Rick Sanchez hosted a forum of 'average joes' yesterday in a sort of focus group on Sarah Palin. CNN did not feel, however, that it needed to invite any Palin supporters. Despite claims that the group accurately represented American opinion, its responses demonstrated a total disconnect from actual public sentiment.

Sanchez, shown right in a file photo, asked the group to inform viewers of their political and party affiliations, concluding that there was "a pretty good cross-section" of Americans participating. He then asked about Palin. None of the viewers said they would vote for her in a presidential run, and none said they plan on purchasing her new book (video and transcript below the fold - h/t Townhall).

A screening of the show's guests would hardly be a surprise given Sanchez's history of playing fast and loose with the facts when conservatives are involved. He touted one of the quotes falsely attributed to Rush Limbaugh, and later apologized for his mistake, adding to his long list of retractions. He has blamed the murder of a police officer on "right wing radio" and berated Fox News for alleged bias while ignoring CNN's.

Sanchez's coverage of Palin herself has not exactly been stellar. He suggested after she stepped down as governor that she might be pregnant.

Alright let's go to the folks joining us here today as what I sometimes affectionately call our twitter tour. How many of you call yourselves republicans? Raise your hand.

One. Conservatives? Raise your hand if you're a conservative.

Okay, raise your hand if you're an independent, or a moderate.

Okay, raise your hand if you are a Democrat.

Okay, good. So we've got a pretty good cross-section. I've never met you guys before. How many of you are planning to go out and buy Sarah Palin's book?

None? How many of you would vote for her for president?

None? How many would consider voting for her for president?

None? That surprises me.

Palin's poll numbers are not fantastic, but she has a decent base of support. As of November 13, according to a CBS News poll, 23 percent of Americans have a favorable view of her, compared to 38 percent who answered unfavorably. An ABC/Washington Post poll (see the link above) conducted from November 12-15 found that 46 percent of Americans would at least consider voting for Palin for president.

Given these poll numbers, it is plainly obvious that this group of citizens was not an accurate cross-section of Americans, despite Sanchez's claims. At the very least CNN could have brought one Palin supporter on out of the nine that appeared (a truly representative sample would have had roughly 4 voters considering supporting Palin, one of which would definitely vote for her).

CNN should have made a better effort to portray the actual views of the country. Bogus cross-sections such as this skew Americans' views of the political stances of their fellow citizens, and can do nothing but confuse or misinform the channel's audience.
Media Bias Debate 2008 Presidential Liberals & Democrats Conservatives & Republicans Covert Liberal Activists 2012 Presidential CNN Fox News Channel CNN Newsroom Rick Sanchez Sarah Palin