Despite 'Truce,' White House Continues to Peddle Misinformation About Fox 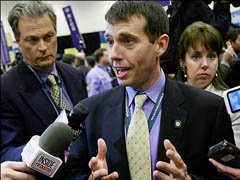 It seems that the moratorium on appearances by White House officers on the Fox News Channel has ended. But high-ranking Democratic officials continue to peddle false information about the cable network, leveling unsupported charges of bias and political favoritism against it.

David Plouffe all but confirmed the truce when he told The Swamp today that he is planning on promoting his new book "The Audacity to Win" on Fox's "On the Record with Greta Van Susteren" Thursday night. Plouffe had cut Fox out of his regular network news appearances.

Despite his decision to appear on Fox, however, Plouffe continued to tout false claims about Fox's reporting. He claimed on Sunday's "Meet the Press" that the network "turned into a 24-hour propaganda channel for the McCain campaign, really, in the last 60 days."

But a study by the nonpartisan Pew Research Center contradicted these claims. Pew found that Fox was the most unbiased of any of the three major cable news networks during the last six weeks of the campaign.

It is a relief that the Obama team has ceased its de facto boycott of Fox, but it is troubling that high-level Democrats continue to level these charges of bias against the network, even while overwhelming evidence suggests that the network's competitors have historically been more guilty of political favoritism.