Sting: Obama Was 'Sent From God', Critics 'Violent and Full of Fear' 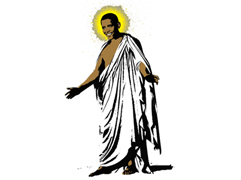 Many Hollywood leftists consider President Obama a figurative godsend. Some, including Sting, think he was literally sent from God. The former Police front-man told the Associated Press that he believes that Obama is a gift from Heaven, delivered to shepherd the befuddled masses to providence (h/t Ace).

"In many ways, he's sent from God," Sting said in an interview with the AP. He heaped praise upon the President for his ability to lead the country though the "mess" in which we find ourselves. He met Obama recently and "found him to be very genuine, very present, clearly super-smart, and exactly what we need in the world."

"I can't think of any be better qualified because of his background, his education, particularly in regard to Islam," he added. Sting then went on to bash the President's critics as deranged, ignorant, and "medieval".

The British singer, who released the seasonal album "On A Winter's Night" this week, said he's fascinated by American politics, Obama, and also by Obama's opponents on the right.

"It's aggressive and violent and full of fear," he said of the backlash against Obama. "They don't want change, they want things to feel the same because they feel safe there."

Sting, 58, said he's hopeful that the world's problems can be dealt with, but is frustrated that "we seem to be living in a currency of medieval ideas."

"My hope is that we can start talking about real issues and not caring about whether God cares about your hemline or your color," he said. "We are here to evolve as one family, and we can't be separate anymore."

So Sting belittled and demonized opponents of the Obama agenda, and then urged us all to come together. Sting's glaring hypocrisy is outdone only by his audacious deification of the President. Hollywood sophistry at its best.

Let's just hope Sting leaves it that, and doesn't call for an inquisition or the burning at the stake of all the president's critics.
Religion Culture/Society Associated Press Entertainment Media Music Industry Celebrities Sting