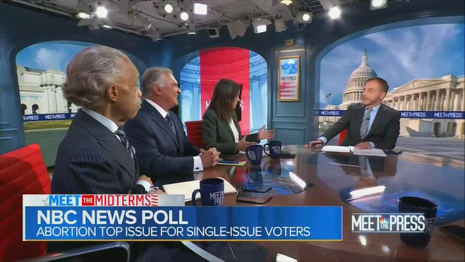 On Monday, Fox News associate editor Hanna Panreck reported on liberal media Sunday shows strategizing on how the abortion issue could help Democrats: “NBC, ABC, and more debated Sunday whether abortion and the potential overturn of Roe v. Wade would make a difference in the midterm elections.” She specifically highlight how “NBC's Chuck Todd said during Sunday’s ‘Meet the Press’ that the possible reversal of Roe has ‘given life to the Democratic coalition.’ If the decision does get overturned, he said, it might level the playing field.”

“On ABC’s ‘This Week,’ Molly Ball, Time magazine’s national political correspondent, said that the party has already seen the ‘activation,’ noting the protests and demonstrations that have emerged across the country in response to the leak,” Panreck noted. She then pointed out how Ball warned: “Democrats have to hope that that continues. People do not feel like the Democrats are helping them, people do not feel that the government is doing anything to solve their problems right now.”