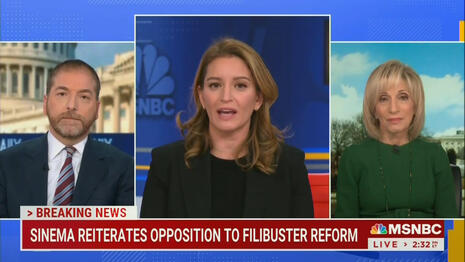 On Monday, Fox News Digital Editor Andrew Kugle reported on how the leftist media have been trying to help the Democratic Party eliminate the filibuster in order to shove a radical agenda through Congress: “After a year of Senate Democratic Majority Leader Chuck Schumer, D-N.Y., and his party pushing to eliminate the legislative filibuster, news outlets have pushed a distorted and often biased narrative on this topic.”

“News coverage of the Senate filibuster debate often omits or downplays Democrats’ recent hypocrisy on the issue and fails to inform Americans of the role the filibuster serves in the Senate, according to Thomas Jipping, a senior legal fellow for the Heritage Foundation,” Kugle explained. He added: “Instead, much of the coverage of the filibuster framing the debate mimics Democratic and liberal talking points. For example, the media often frames how eliminating the filibuster is necessary to save democracy in the United States.”

Read the full article on FoxNews.com.