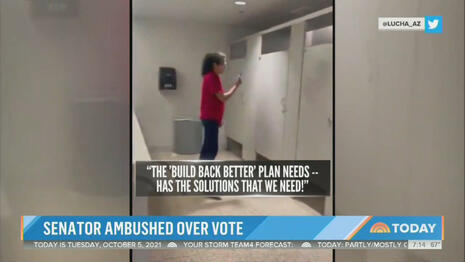 On Monday, National Review’s Charles C.W. Cooke had to explain to the liberal media that left-wing activists harassing Arizona Senator Kyrsten Sinema to the point of following the lawmaker into a bathroom was “not normal.” He called out the fact that the press had failed to denounce the radical tactics:

The condemnation was...well, non-existent. Reporting on the incident, Newsweek led with the fact that, as of last night, the video had “been viewed 4 million times on social media.” At the Washington Post, the key takeaway was that “frustration over Sen. Kyrsten Sinema’s refusal to fall in line with other Senate Democrats and pass legislation central to President Biden’s agenda” had “boiled over.” On Twitter, meanwhile, the Daily Beast contended merely that Sinema had “locked herself in [the] bathroom to avoid young activists.”

In response to that Daily Beast line, Cooke offered a much-needed dose of common sense: “Where I come from, ‘avoiding’ others while using the lavatory is standard procedure. Being followed into the lavatory by angry crowds is not.”