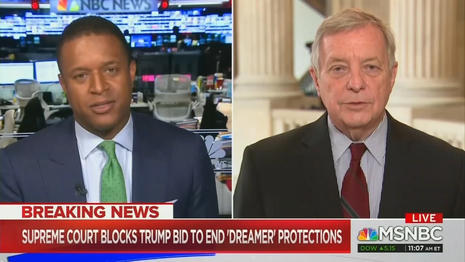 Just one week after he asked South Carolina Senator Tim Scott if Republicans were using him a “token” on the issue of police reform, on Thursday, MSNBC anchor Craig Melvin refused to ask Democratic Senator Dick Durbin about similar comments the Illinois lawmaker made about Scott’s proposed legislation.

During a Senate floor speech on Wednesday, Durbin derided police reform policies advocated by Scott and other Republicans: “Let’s not do something that is a token, half-hearted approach. Let’s focus instead on making a change that will make a difference in the future of America.”

Later in the day, Scott took to the Senate floor himself to respond to Durbin during an emotional speech: “To have the senator from Illinois refer to this process, this bill, this opportunity to restore hope and confidence and trust from the American people, from African Americans, from communities of color, to call this a token process hurts my soul for my country, for our people.”

Melvin welcomed Durbin on MSNBC during Thursday’s 11:00 a.m. ET hour to cheer the Supreme Court upholding the DACA immigration policy implemented by the Obama administration. However, the two-minute exchange focused entirely on that topic, with the anchor not even mentioning the controversy swirling around the Democrat’s remarks from just 24 hours earlier.

That total avoidance of the issue occurred despite Durbin apologizing to Scott on Wednesday for his insensitive dismissal of the GOP reform effort.

So far, none of the broadcast networks have touched the story. On Wednesday evening, NBC and ABC didn’t even bother to report on Senator Scott announcing police reform legislation, let alone Durbin’s nasty rejection of the bill.

Democrats never seem to have to answer for their hostile rhetoric in the liberal media. Even when the same language would get a Republican excoriated by the same reporters.

Here is a full transcript of Melvin’s June 18 interview with Durbin:

CRAIG MELVIN: I want to turn to Democratic Senator Dick Durbin of Illinois for a moment. Senator Durbin serves as Minority Whip. He also signed a brief to the court asking the court to not allow President Trump to end DACA. He also first introduced the DREAM Act nearly 20 years ago, if our math is right, Senator Durbin. First of all, just your general reaction to the court’s decision?

SEN. DICK DURBIN [D-IL]: Well, I can tell you it’s relief, but not like the relief 700,000 are feeling across America. Imagine if you were waiting on the Supreme Court decision to decide whether or not you can continue working as a teacher or a nurse. Imagine you’re waiting on that decision to decide whether, as a medical student, you can complete your residency on your way to becoming a doctor. Or imagine if you’re waiting for that decision and wondering if your family’s going to be split apart and deported out of America. So that decision is a great relief to me. But to these people, by and large, 700,000 of them, it is a sigh of relief that they’ve been begging for, for a long time.

MELVIN: To Julia’s point a few moments ago, though, does this decision take the pressure, in some measure, off you and your colleagues there on the Hill to get something – to get anything done on immigration?

DURBIN: Fundamentally it does not, because the president has it within his power next week to initiate a new rescission of DACA. Of course it will be challenged in court, but once again, there’s be a period of uncertainty. And what we’re basically saying and hoping is that the White House will give a reprieve to these 700,000 and say there won’t be any further action on DACA during this calendar year. Think about this, 40,000 of those DACA recipients are health care heroes. They’re doctors and nurses and medical professionals who are on the front lines of fighting this pandemic. Two hundred thousand of them are essential employees. For goodness sakes, they’re an important part of America. And the president can give them some relief by saying we’re not going to take this issue up for the remainder of this year. If he doesn’t, if he decides to move forward, the only recourse is right here in Congress. A bill has passed the House, the Dream and Promise Act, it can be taken up next week by Senator McConnell here in the Senate. We can solve this problem once and for all.

MELVIN: Alright, Senator Dick Durbin there on the Hill for us. Senator Durbin, thank you, thanks for your time.