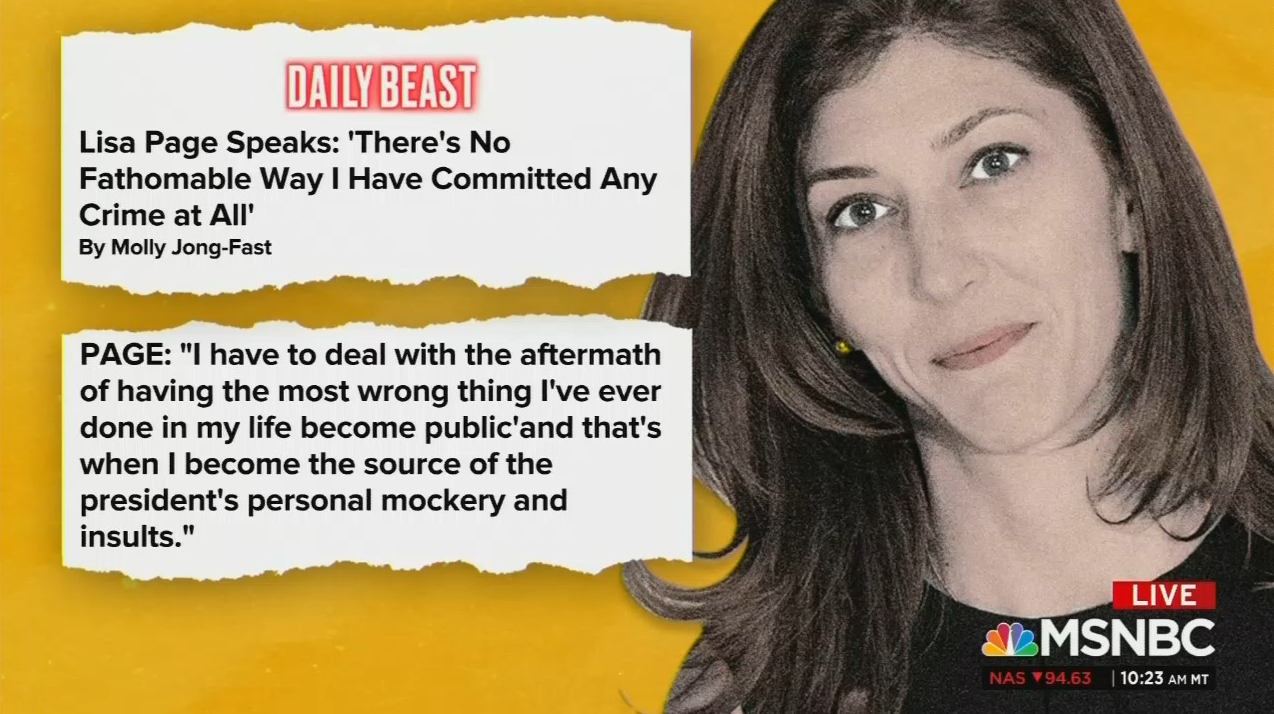 In a lengthy Sunday article touting a softball interview with former FBI lawyer Lisa Page, The Daily Beast’s Molly Jong-Fast portrayed the infamous anti-Trump bureaucrat as one of the President’s “victims” who was put through “the MAGA meat grinder.” The author lamented that Page was subjected to an “extraordinarily politicized environment and a president who had a habit of attacking career government employees.”

Early in the piece, Jong-Fast described Page as a “thin and athletic” woman who “speaks in an exceedingly confident, clear, and lawyerly way.” However, the liberal writer sorrowfully added: “But having been through the MAGA meat grinder has clearly worn her down, not unlike the other women I’ve met who’ve been subjected to the president’s abuse.  She is just slightly crumbly around the edges the way the president’s other victims are.”

Page complained that Trump’s criticism of her was “like being punched in the gut,” as well as “sickening” and “intimidating.” Jong-Fast sympathized: “Does it affect you in your normal day-to-day life?” Page shared her fear of Trump supporters: “...if I’m walking down the street or shopping and there’s somebody wearing Trump gear or a MAGA hat, I’ll walk the other way or try to put some distance between us because I’m not looking for conflict.”

When Jong-Fast wondered what it was like at the FBI after Trump fired ex-director James Comey, Page confessed: “It was horrible. It was a devastating moment at the FBI. It was like a funeral, only worse...”

The article went on to mourn Page’s downfall:

Page would have probably just been another FBI lawyer if it wasn’t for the extraordinarily politicized environment and a president who had a habit of attacking career government employees. Page, like many other targets of Trump’s wrath, felt the pressure both from the external force of his massive social media presence, but also from within the government.

“She doesn’t think for a minute that her texts with Peter Strzok are too political,” Jong-Fast declared to readers, referring to Page’s exchanges with the former FBI agent she was having an extramarital affair with at the time. The very same texts in which Strzok cryptically assured Page that “we’ll stop” Trump from getting elected in 2016.

“Does it feel like a trauma?,” Jong-Fast later wondered in the interview. Page agreed: “It is. I wouldn’t even call it PTSD because it’s not over. It’s ongoing.”

The Daily Beast writer then claimed that Page wasn’t just feeling sorry for herself: “One thing becomes quickly apparent talking to Page: What really upset her, what still devastates her, was not the end of her extremely promising career at the FBI, but instead what Trump has done to the FBI itself.” Page sneered: “And it’s crushing to see the noble Justice Department, my Justice Department, the place I grew up in, feel like it’s abandoned its principles of truth and independence.”

Wrapping up the piece, Jong-Fast simply went on a nasty anti-Trump screed:

The era of Trump populism always had an ugly edge, particularly toward women. Trump revels in bringing misery to his opponents and will always seek out and exploit any weakness. Page “wasn’t nice to him,” and so in his eyes she can be endlessly targeted and assaulted.

It’s tempting to describe this as just part of Trump’s deep, baked-in misogyny and sociopathy, but in Page’s case it’s worse; it’s a sign of how deeply he’s corrupted the government to serve his will and his whims. His apologists have become part of Trump’s own squad of witch-hunters, hunting fantasies like “Ukrainian interference” while attacking the people who tried to protect us from Russian attacks.

It’s not just that Lisa Page may never be safe as long as Trump is president.

It’s that we won’t be safe, either.

The entire interview was conducted from the premise that Page was a poor victim of the President, little focus was placed on her own inappropriate behavior.

Other liberal media outlets have adopted the same framing of the story. A headline on CNN.com about the interview proclaimed: “Ex-FBI lawyer targeted by Trump breaks silence.”