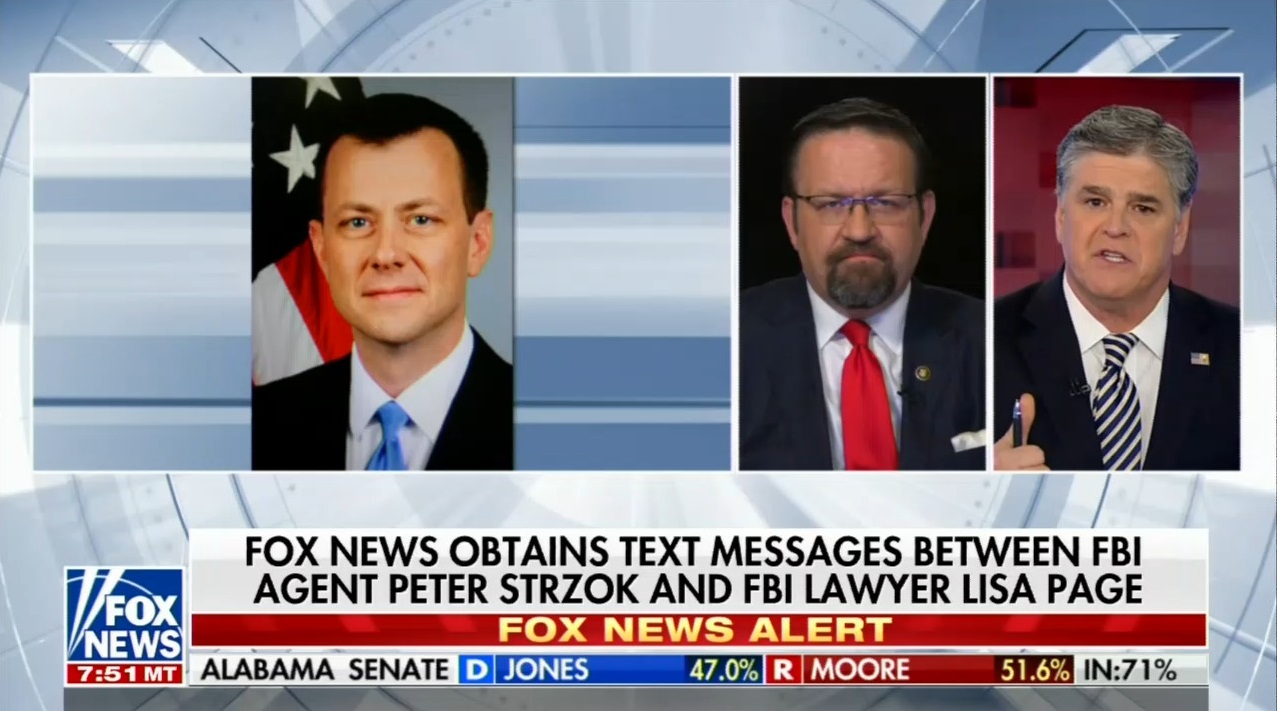 On Tuesday night as the election results came in from Alabama, a number of news outlets reported on the Department of Justice obtaining thousands of text messages between controversial FBI officials Peter Strzok and Lisa Page showing their disdain for “awful,” “idiot,” and “loathsome” President Donald Trump, creating yet another headache for Robert Mueller as the Trump-Russia probe drags on.

From a media bias perspective, there’s three questions to be answered on Wednesday morning: Will ABC, CBS, and NBC cover this? And if so, how much time will they spend on it? Given that Democrat Doug Jones is projected to the Alabama Senate race (as of this post’s publication), will they find time to mention this crucial story amidst their on-air celebrations?

Not surprisingly, the story was ignored on CNN and MSNBC but covered to varying degrees on FNC’s Hannity and The Ingraham Angle. Along with CBSNews.com, Politico, and USA Today, FoxNews.com’s Samuel Chamberlain typed out a few of them:

The messages obtained by Fox News were sent during the 2016 campaign and contain multiple discussions about various candidates. On March 2, Strzok texted Page that someone "asked me who I’d vote for, guessed[Ohio Gov. John] Kasich."

“Seriously?! Would you not [vote] D[emocrat]?” Page responded.

“Yet he many[sic] win,” Strzok responded. "Good for Hillary.”

“America will get what the voting public deserves,” said Strzok, to which Page responded. “That’s what I’m afraid of.”

Later that same day, Strzok texted Page, “Ok I may vote for Trump.”

“What?” answered Page. "Poor Kasich. He’s the only sensible man up there.”

Strzok later told Page, “Exacty re Kasich. And he has ZERO appeal.”

To be fair, the duo shared disdain for Hillary Clinton’s Democratic presidential opponents. Page texted Strzok in August 2015 that she spotted a Bernie Sanders sticker and it “made me want to key the car.” As for Martin O’Malley, Strzok dubbed him “a freak show.”