On Thursday, the broadcast networks kept up their crusade to push Facebook into censoring political speech by celebrating Twitter’s move to ban all political ads from its social media platform. The reporters on NBC, ABC, and CBS weren’t alone in their joy, touting how “Democrats largely praised” the move as well.

“Now to a major shift this morning for Twitter, the social media giant has announced that starting next month it is banning political ads,” co-host Hoda Kotb proclaimed on NBC’s Today show. “It’s a move that puts immediate pressure on Facebook, which has refused to do the same,” she added.

In the report that followed, technology correspondent Jo Ling Kent touted Twitter CEO Jack Dorsey warning about the “significant risks” of political advertising being “used to influence votes to affect the lives of millions.” Of course that’s always been purpose of political campaigns in a democracy.

Read the statement from Media Research Center President Brent Bozell calling out Twitter's decision as an attempt to “further limit the ability of conservatives to get their message heard.”

Kent seized on Dorsey’s comments to declare that it was “ramping up pressure on Mark Zuckerberg, who has faced major criticism since Facebook announced it would not fact-check political ads posted by candidates.”

A clip ran of NBC Nightly News anchor Lester Holt grilling Zuckerberg in a recent interview and fearing that the social network’s policy would allow politicians like President Trump to “lie, lie, lie.” 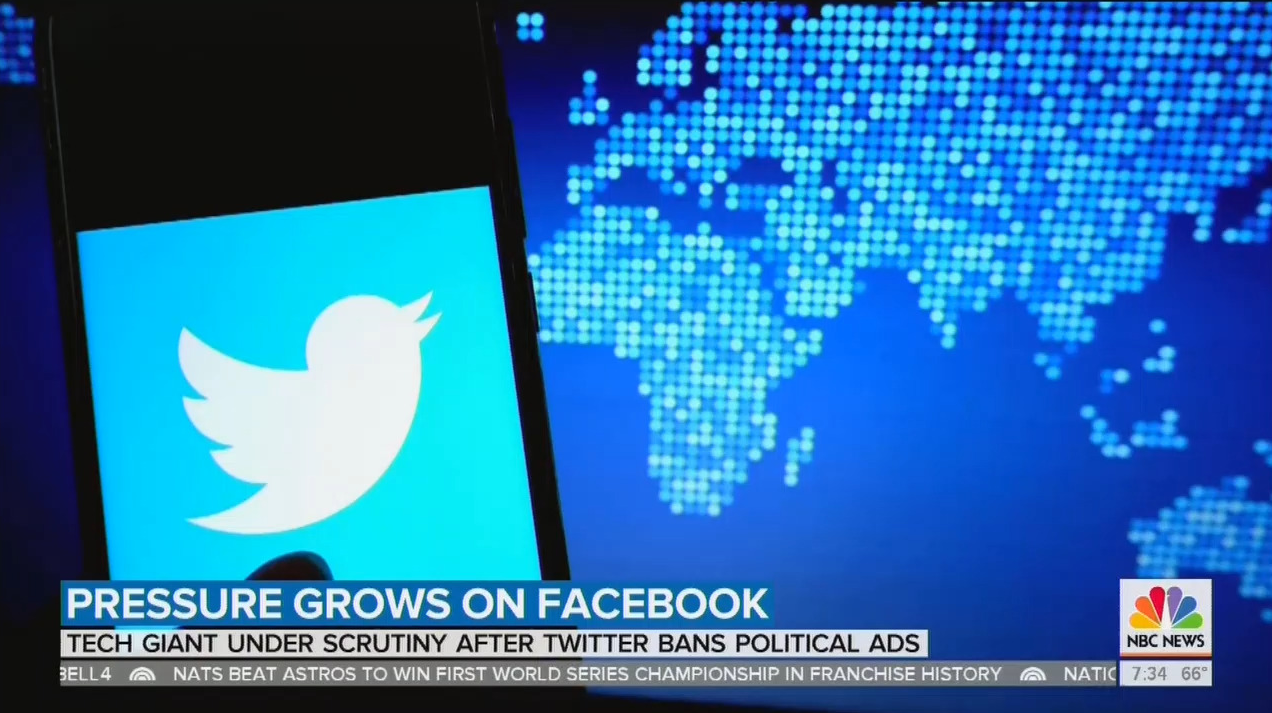 After citing Dorsey claiming “this isn’t about free expression,” Kent eagerly noted: “Some on Capitol Hill agreed, taking aim at Facebook’s policy during a hearing with Zuckeberg last week.” Footage was featured of fact-challenged far-left Congresswoman Alexandria Ocasio-Cortez having the audacity to demand fact-checking of other elected officials during that hearing:

Do you see a potential problem here with a complete lack of fact-checking on political advertisements?...So you won’t take down lies or you will take down lies? I think that’s just a pretty simple yes or no.

While Kent briefly acknowledged “President Trump’s 2020 campaign calling the ban on political ads ‘a very dumb decision’ and ‘another attempt to silence conservatives,’” she quickly turned to the fact that “Democratic presidential candidate Pete Buttigieg praised the change.” Buttigieg ranted: “I think other online platforms would do well to either accept their responsibility for truth or question whether they should be in business at all.”

Wrapping up the segment, the reporter kept up the pressure: “The other talk of Silicon Valley is whether Facebook will eventually cave and do what Twitter’s doing....we remember that hundreds of Zuckerberg’s own employees sent him an open letter asking him to reconsider his decision.”

“And now to what’s being called a bold move by Twitter CEO Jack Dorsey, announcing plans to ban all political ads as the 2020 campaigns ramp up,” co-host Michael Strahan heralded on ABC’s Good Morning America. He hyped how “The move has some asking whether other social media networks will follow suit.”

The report began with correspondent Tom Llamas explaining: “The Trump campaign immediately came out and blasted the move, saying it was an attempt to silence conservative voices, alluding to the President’s large following on Twitter and massive campaign war chest, but this move may be more about keeping the spotlight on Facebook than the 2020 election.” 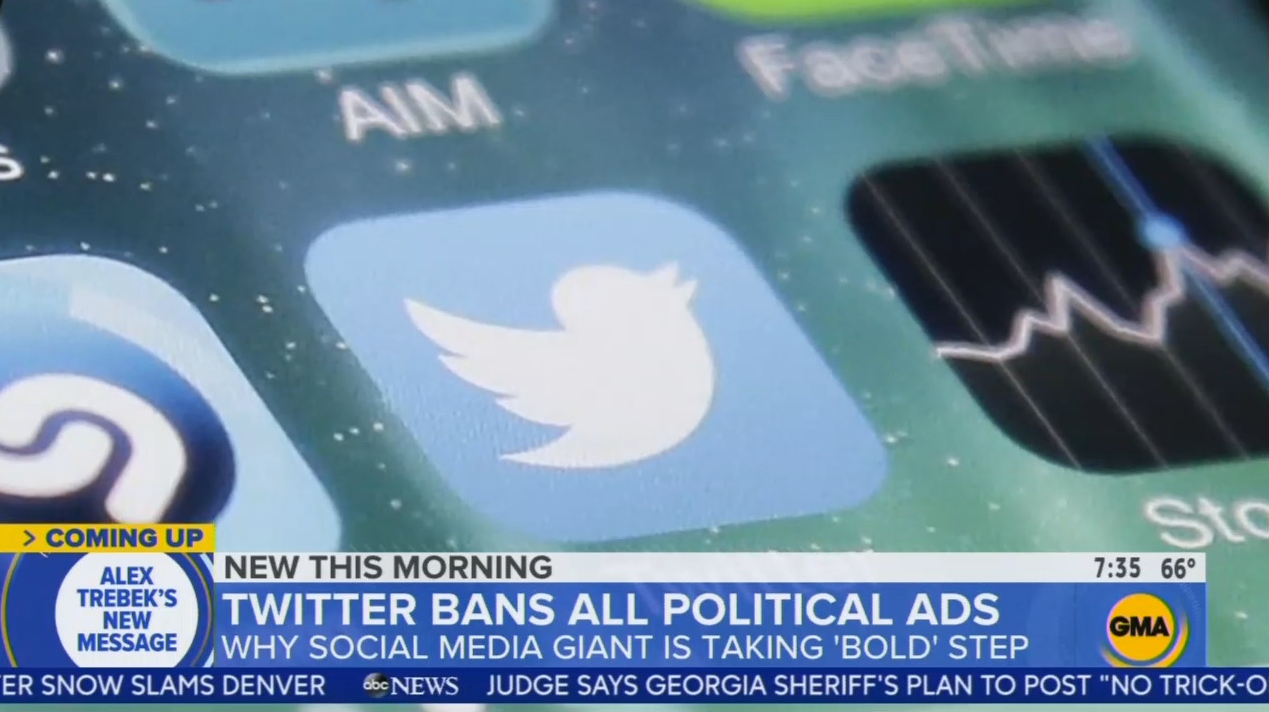 Moments later, the reporter gushed: “Twitter’s power play seen by many as a slap in the face to Mark Zuckerberg, who recently decided Facebook will run political ads, even ones with lies, without fact-checking them.” Llamas further hyped: “Just last week, Zuckerberg clashing with Democrats outraged over the policy.”

Like NBC, a soundbite was played of Ocasio-Cortez hammering Zuckerberg and laughably portraying herself as the arbiter of accuracy.

Despite applauding the move by Twitter, Llamas still admonished: “...there is still plenty of pressure on Twitter this election when it comes to misinformation.” Washington Post tech policy reporter Cat Zakrzewski complained: “This is a response to concerns around how ads could be boosted and targeted to spread disinformation, but it doesn’t address, you know, what happens when President Trump tweets something that’s false or when a Russian actor uses a normal Twitter account to spread a false statement.”

As the segment ended,. co-host George Stephanopoulos hailed the “big message” being sent by Twitter. Llamas agreed: “It does, and it keeps the focus and the pressure on misinformation and social media. The spotlight is there.” Co-host Robin Roberts chimed in: “As it should be.”

After all, the last thing network journalists would want is for anyone to focus on the biased misinformation put out by them on a routine basis.

“Twitter is dropping all political ads from the site, triggering a new debate about free speech,” co-host Tony Dokoupil told viewers on CBS This Morning. Turning to correspondent Errol Barnett, he wondered: “So why is this move so significant?” Barnett argued: “Partly because of the fact that it’s the exact opposite of Facebook’s decision last week to continue selling political ads even if they contain false information.”

The reporter painted Dorsey’s decision as courageous: “In response to growing backlash about hosting political ads, Twitter CEO Jack Dorsey took an all-encompassing stand against them.” 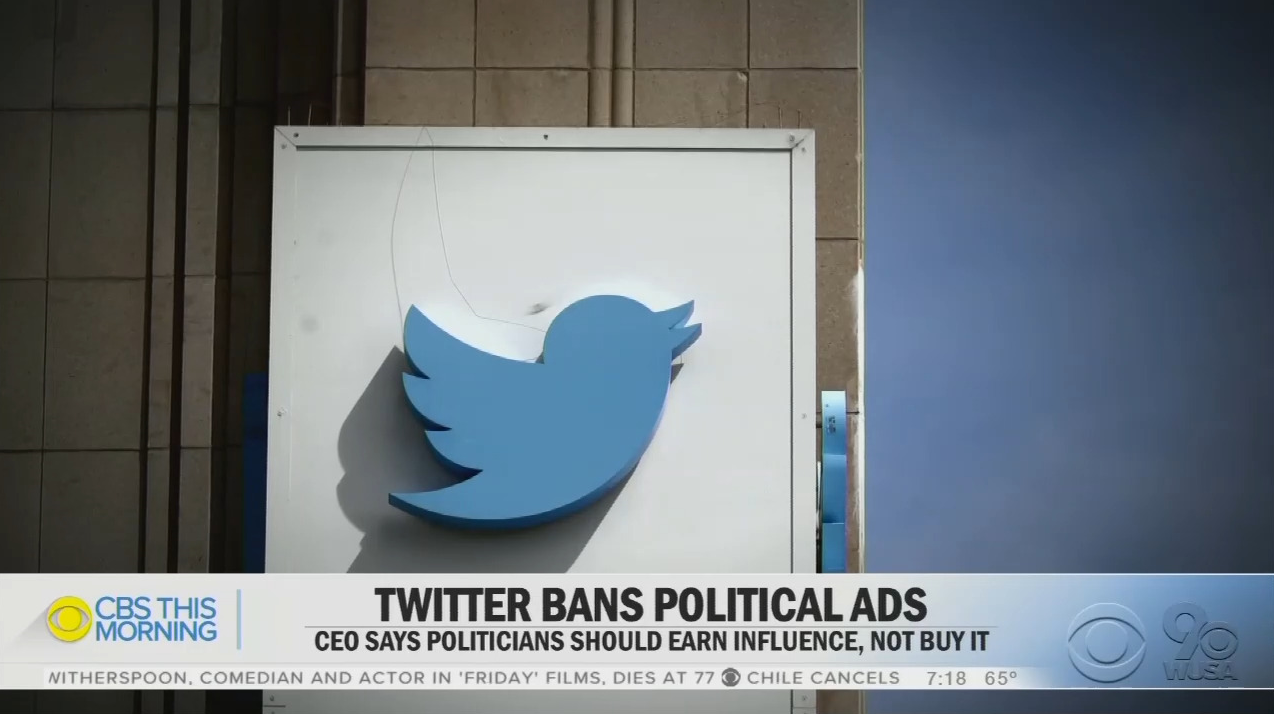 Barnett pointed out that “Facebook’s decision to not censor politicians, even at the risk of spreading misinformation, faced scrutiny on Capitol Hill last week.” Just like NBC and ABC, CBS put up Ocasio-Cortez as someone demanding honesty in politics.

Barnett cited Axios media reporter Sarah Fischer claiming “the decision is not about money but sending a message that certain types of free expression can do more harm than good.” A soundbite was featured of Fischer defending the change: “So many people were abusing the system, lying in ads. They were very hard to regulate. And I think that it’s doing what it thinks is best for its community.”

Concluding the piece, Barnett further justified: “And Fischer also told us Twitter feels it must regulate its own content since there’s no federal oversight and it’s not tied to the same rules and regulations as broadcast networks like CBS.”

The disturbing irony of the media cheering on restrictions to free speech seems completely lost on reporters who are more focused on what they think is politically helpful for Democrats than on what is actually good for democracy.