“Sex and the capital? Award-winning actress Cynthia Nixon the latest celebrity to throw her hat into the political ring,” co-host Hoda Kotb proclaimed at the top of the show. In the report that followed in the 7:30 a.m. ET hour, correspondent Sheinelle Jones told viewers: “Well, Cynthia Nixon is 51 years old and already an education activist. Her children attend public schools here in New York City. If elected, she would become the state’s first female and first openly gay governor.”

Amid clips of Nixon’s first campaign ad announcing her entrance into the race, Jones noted that “the actress is hoping to add New York Governor to her resume.” The reporter went to tout the celebrity’s credentials as part of the left-wing resistance against President Trump: “Nixon has long been a progressive activist....Speaking at women’s marches in the past year.”

Only late in the report did Jones mention Nixon’s low poll numbers: “Before Nixon announced, one poll had Cuomo leading Nixon 66% to 19% among registered Democrats in a primary race.”

Absent from the segment was any mention of Nixon’s recent controversial comments demanding that her fellow liberals “take to the streets as never before” against the President. “If we want our democracy back, we have to get out there ourselves and seize it,” she told a crowd at a Manhattan event called the “People’s State of the Union” in January.

It will be interesting to see how many other gubernatorial primaries NBC covers in 2018. Unless a left-wing celebrity is running, they’ll probably avoid similar races.

Here is a full transcript of the March 20 story:

SAVANNAH GUTHRIE: We are back with a well-known actress throwing her hat into the political arena.

HODA KOTB: Yup, Sex and the City star Cynthia Nixon, she made it official Monday, announcing she’s running for Governor of New York. And Sheinelle Jones is here were more on that story. Hey. 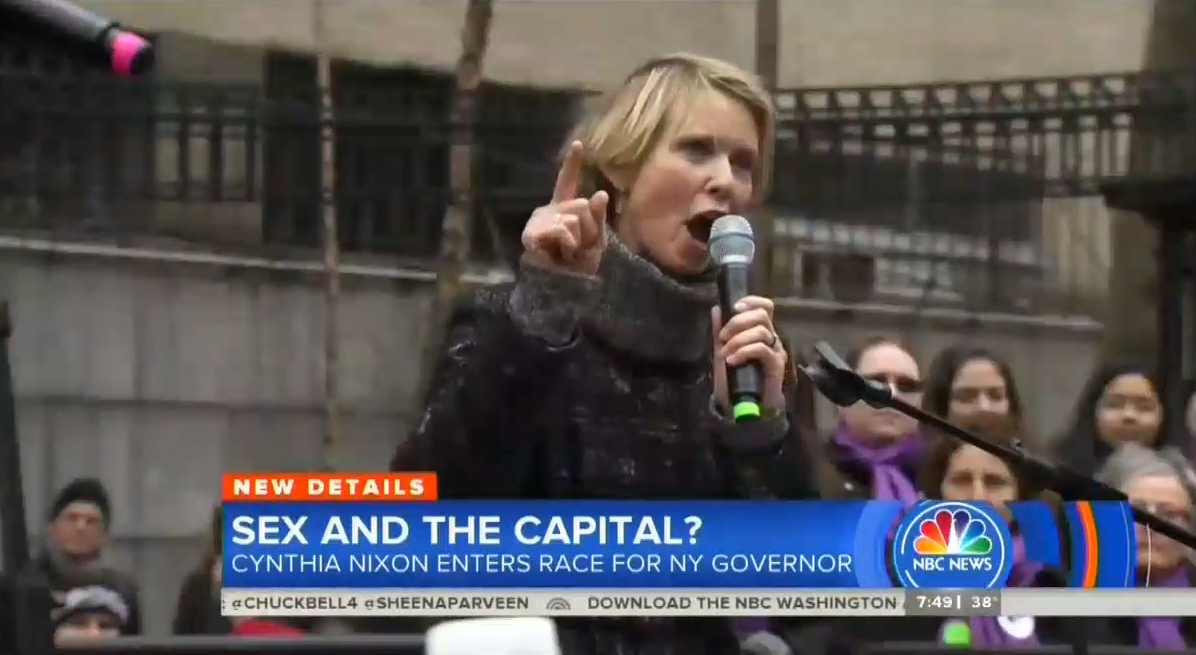 CYNTHIA NIXON [SEX AND THE CITY]: It’s like, when single men have a lot of money, it works to their advantage. But when a single woman has money, it’s a problem you have to deal with. It’s ridiculous. I want to enjoy my success, not apologize for it.

JONES: You may know her best as attorney Miranda Hobbs from Sex and the City.

JONES: But this morning, the actress is hoping to add New York Governor to her resume.

NIXON [AD]: Together, we can win this fight.

JONES: On Monday, the Tony, Emmy and Grammy winner announced she would challenge the incumbent Democrat, Andrew Cuomo, who’s served as New York Governor since 2011. In a statement, the spokesperson for Governor Cuomo touted his own accomplishments, adding, “It’s great that we live in a democracy where anyone can run for office.”

NIXON: We must fight hard!

JONES: Nixon has long been a progressive activist.

NIXON: I know what strong-minded women can do!

JONES: Speaking at women’s marches in the past year.

NIXON: I have heard those rumors.

JONES: Last year, Nixon opened up to Today about rumors that she might seek office.

NIXON: I think there are a lot of people who would like me to run, and I think for a variety of reasons, but I think the number one is education.

JONES: Reporters asked Governor Cuomo about a possible challenge from Nixon earlier this month, and whether her star power could make a difference.

GOV. ANDREW CUOMO [D-NY]: Normally name recognition is relevant when it has some connection to the endeavor. But if it’s just about name recognition, then I’m hoping that Brad Pitt and Angelina Jolie and Billy Joel don’t get into the race.

JONES: Before Nixon announced, one poll had Cuomo leading Nixon 66% to 19% among registered Democrats in a primary race.

DONALD TRUMP [2004 EMMYS]: Nominees for supporting actress in a comedy series are.

JONES: ...she accepted the award from Trump himself.

NIXON: Thank you very much!

Nixon is also a breast cancer survivor. Her former Sex and the City co-star Kristen Davis tweeted that she’s quote, “proud” of Nixon and that she says, “I know she will be an excellent governor.” To be continued.

CARSON DALY: You can’t rule anything out now.