NBC Aghast at Trump’s ‘Tirade’; Might Be ‘Threat to National Security’

Reacting with horror to President Trump’s Tuesday night rally in Phoenix, on Wednesday’s NBC Today, correspondent Kristen Welker proclaimed: “President Trump is waking up here in Arizona after unleashing a 77-minute fiery and divisive speech here overnight. It was taking aim at his detractors and it was a major reversal after calling on the country to come together just one day earlier.”

The reporter fretted that Trump was “waging his own battle” against his critics and described an “unrestrained” president “lashing out in a tirade.” “The speech, which lasted for more than an hour, filled with red meat for his staunchest supporters,” Welker declared. She further warned: “No one was spared his sharp barbs, including members of his own party from Arizona.”

After spending the entire segment portraying the President as unhinged, Welker wrapped up her report by touting: “Former Director of National Intelligence James Clapper blasting Mr. Trump and calling the speech disturbing.” A soundbite followed of the Obama administration official ranting: “I really question his ability to – his fitness to be in this office.”

Welker then highlighted: “Clapper also suggesting the President could be a threat to national security.” Another clip ran of intelligence official: “I worry about frankly, you know, the access to the nuclear codes.”

Clapper hurled his incendiary comments during an appearance on CNN immediately following the Trump rally. The cable news channel experienced a total freak-out over the President’s speech, questioning his mental stability in once instance and labeling him “psychotically demented” in another.

NBC’s biased coverage of the rally was brought to viewers by Citi, JCPenny, and Hilton.

Here is a full transcript of Welker’s August 23 report:

MATT LAUER: He opened with a call for unity, but then he quickly tore into his detractors. And as he was speaking, protests were raging in the streets outside of that arena. We have both sides of this story covered, starting with NBC White House correspondent Kristen Welker. Kristen, get us started, good morning. 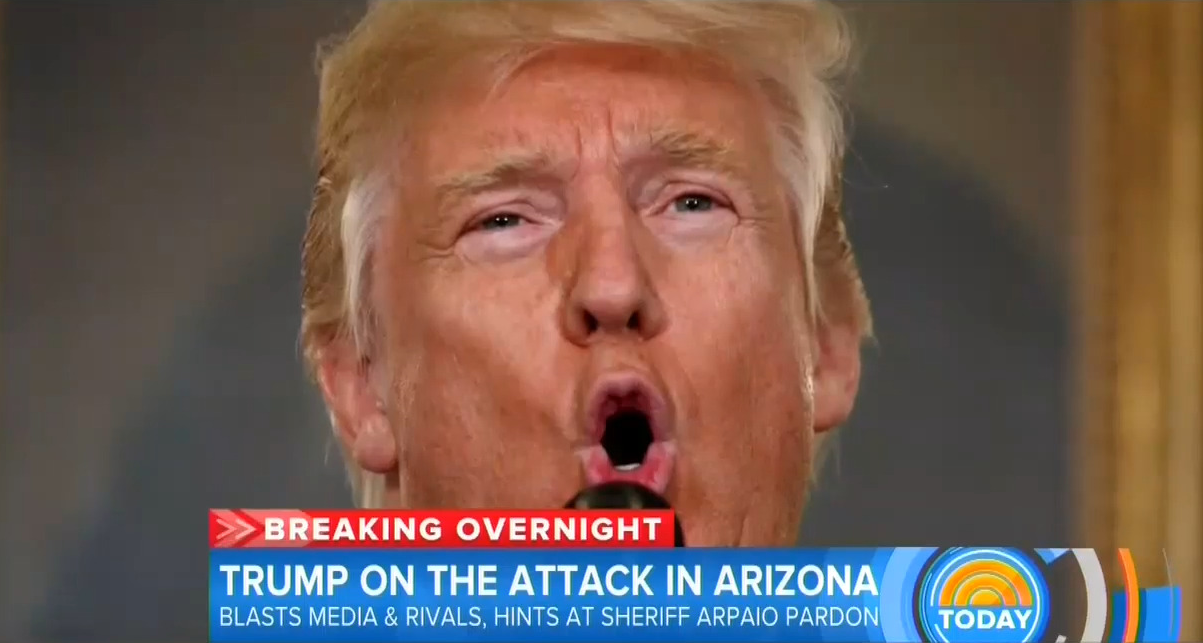 KRISTEN WELKER: Hi, Matt, good morning to you. President Trump is waking up here in Arizona after unleashing a 77-minute fiery and divisive speech here overnight. It was taking aim at his detractors and it was a major reversal after calling on the country to come together just one day earlier.

As protesters lined the streets outside the Phoenix convention center, inside a very fired up President Trump waging his own battle. Abandoning his carefully scripted remarks from a day earlier, Mr. Trump was unrestrained, lashing out in a tirade that started with a call for unity. The President again defending his highly-criticized response to the clashes in Charlottesville.

DONALD TRUMP: What happened in Charlottesville strikes at the core of America.

WELKER: But the President quickly turned his remarks into an all-out assault, accusing the press of misrepresenting his initial statements.

TRUMP: They don’t want to report that I spoke out forcefully against hatred, bigotry, and violence, and strongly condemned the neo-Nazis, the white supremacists, and the KKK.

WELKER: Mr. Trump never mentioning the most controversial part of his response to the Virginia violence.

TRUMP: You also had people that were very fine people, on both sides.

WELKER: Words that prompted criticism from both Democrats and Republicans, as well as business and military leaders. Still, the President arguing overnight his initial statements were clear and on point.

WELKER: The speech, which lasted for more than an hour, filled with red meat for his staunchest supporters. The President threatening to shut down the government over the border wall.

TRUMP: We have to close down our government, we’re building that wall.

WELKER: And hinting he will soon pardon immigration hardliner Sheriff Joe Arpaio, despite his own press secretary saying just hours earlier there would be no “discussion” of Arpaio.

TRUMP: I won’t do it tonight because I don’t want to cause any controversy. Is that okay?
But, Sheriff Joe can feel good.

WELKER: Mr. Trump even suggesting the massive trade deal, NAFTA, could soon be a thing of the past.

TRUMP: I don’t think we can make a deal. So I think we’ll end up probably terminating NAFTA.

WELKER: No one was spared his sharp barbs, including members of his own party from Arizona. Without mentioning them by name, he took aim at Senator John McCain for voting against the health care bill, and at Senator Jeff Flake, who has been deeply critical of him.

JAMES CLAPPER [CNN]: I really question his ability to – his fitness to be in this office.

WELKER: Clapper also suggesting the President could be a threat to national security.

CLAPPER: I worry about frankly, you know, the access to the nuclear codes.

WELKER: And this morning, new signs the President’s relationship with the Senate’s top Republican could be deteriorating. The New York Times reporting that President Trump and Senate Majority Leader Mitch McConnell haven’t spoken in weeks after an angry phone call over health care that devolved into a shouting match. McConnell’s spokesperson not denying the account, but telling NBC News they have a lot of shared goals, tax reform, infrastructure, funding the government, not defaulting on the debt, passing the defense authorization bill. Still, it is yet another rift for a president who seems to be fighting on many sides. Matt, Savannah?

LAUER: Alright, Kristen Welker on the first part of this story for us. Kristen, thanks very much.