Whenever liberals get upset about something, its almost a guarantee that the broadcast networks will do a story channeling their fears. That was the case Wednesday morning, as ABC’s Good Morning America and NBC’s Today seized on left-wing environmental activists being in hysterics over President Trump’s executive order rolling back excessive environmental regulations imposed by the Obama administration.

At the top of GMA, substitute co-host and World News Tonight anchor David Muir proclaimed: “President Trump under fire. The new backlash over his executive order rolling back President Obama’s climate policies.” In a report that followed minutes later, correspondent Mary Bruce breathlessly cited an unhinged statement from liberal opponents of the action: “But this morning, environmentalists are vowing to fight it. One group describing it as the single biggest attack on climate action in U.S. history, period.”

On the Today show, correspondent Peter Alexander read from the same script: “This morning, President Trump is facing new backlash over his move to erase President Obama’s efforts to combat climate change.” His report featured a soundbite of Democratic Massachusetts Senator Ed Markey ranting: “This is not an executive order, this is a declaration of war.”

Apparently that wasn’t enough, though, as Alexander followed up by reciting an outlandish quote from the media’s favorite eco-warrior, Al Gore: “...describing this executive order, in his words, as a, quote, ‘Misguided step away from a sustainable carbon-free future for ourselves and generations to come.’”

During a report in the 8 a.m. ET hour, fellow correspondent Hallie Jackson fretted “Environmental advocates and some Democrats appalled” by the change in policy.

CBS This Morning only offered a 21-second news brief on the topic, with co-host Norah O’Donnell offering this straightforward description of the order:

The President signed an order yesterday that eliminates numerous restrictions on coal and other fossil fuels in an effort to boost domestic energy production. The order fulfills Mr. Trump’s campaign pledge to roll back the Obama administration’s climate change policies.

In a later brief in the 8:30 ET half hour, fellow co-host Charlie Rose did tout pressure on Trump to maintain current climate agreements:

The Financial Times reports that ExxonMobil urges the Trump administration not to quit the Paris climate treaty. A letter from the oil giant last week calls the deal an effective way to address the risk of climate change. President Trump began rolling back Obama-era regulations on fossil fuels yesterday. He made a campaign promise to pull the United States out of the treaty.

On Tuesday’s evening newscasts, anchors and correspondents were aghast that Trump was “obliterating” Obama’s environmental “legacy.”

Here are excerpts from the March 29 morning show coverage on ABC and NBC: 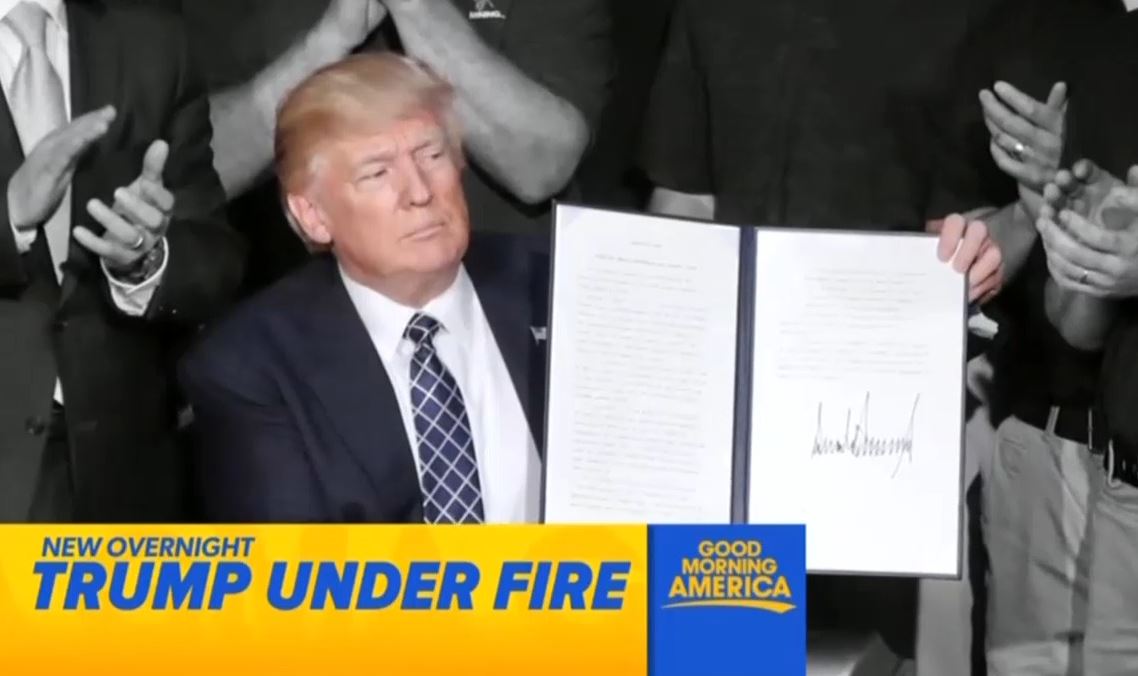 MARY BRUCE: And this morning, the White House is facing challenges on another front. The President yesterday signing an executive order to roll back President Obama’s climate change record with the hopes of reviving the coal industry. But this morning, environmentalists are vowing to fight it. One group describing it as the single biggest attack on climate action in U.S. history, period.

ROBIN ROBERTS: And Mary, the President is saying that executive order is going to create jobs. Do we have any idea how many they say will be saved?

BRUCE: No, we don't, Robin. The White House insists that this action will create jobs, but they won’t say exactly how many. Now, those opposing environmentalists say the White House is overselling it. There are currently fewer than 75,000 remaining coal jobs in the U.S. But by comparison, there are more than 650,000 renewable energy jobs. Robin? 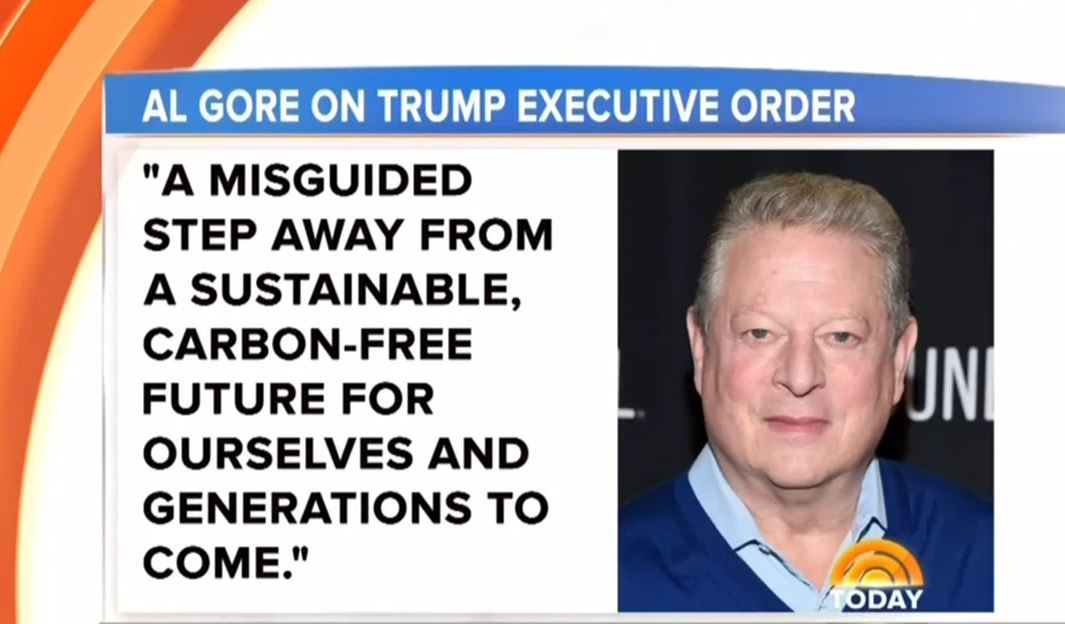 SEN. ED MARKEY [D-MA]: This is not an executive order, this is a declaration of war.

ALEXANDER: The President vowing to jumpstart the economy while rolling back environmental regulations.

DONALD TRUMP: My administration is putting an end to the war on coal.

ALEXANDER: Mr. Trump ordering a review of the “Clean Power Plan” that restricts carbon emissions and no longer requiring the government to consider carbon emissions in future policy decisions.

During the campaign, President Trump told the New York Times he has a, quote, “open mind” about climate change. Though in the past, as you may know, he had called it a hoax. We're also hearing from the former Vice President Al Gore, who is now weighing in, describing this executive order, in his words, as a, quote, “Misguided step away from a sustainable carbon-free future for ourselves and generations to come.”