Despite routinely ignoring Democratic corruption scandals, on Tuesday, the network morning shows were aghast that House Republicans dared to make bureaucratic changes to a congressional ethics panel, accusing the GOP of attempting to “gut” the investigative office.

Leading off NBC’s Today, co-host Matt Lauer announced: “New era. The 115th Congress being sworn in today. For the first time in nine years, both houses and the White House to be controlled by Republicans. Why critics are saying their first item of business goes against President-elect Trump's pledge to drain the swamp.”

In the report that followed minutes later, correspondent Hallie Jackson worried: “...even before this new Congress gets into full swing, the GOP is making a move getting slammed by Democrats as a backtrack on Donald Trump's promise to drain the swamp.” The headline on screen blared: “House GOP Guts Ethics Panel.”

Jackson lamented that Congress was “already courting controversy” with the decision “to gut an independent ethics office created eight years ago after a series of congressional scandals.” She added: “That new move, slammed by Democrats, set to be voted on today...”

Yesterday Republicans in the House made news. They took this independent office that was set up to oversee and police corruption and scandal in Congress, they stripped its independence, and put it under the control of Congress, the very group they're supposed to police. Donald Trump ran a campaign, said, “I'm going to drain the swamp in Washington.” Doesn't this do the opposite? And how does he feel about it?

At the top of ABC’s Good Morning America, co-host George Stephanopoulos warned viewers: “New bombshell overnight as Republicans in Congress move to strip power from an important government watchdog.” He later turned to congressional correspondent Mary Bruce about the issue and she decried the move: “George, this came as a huge surprise. Late last night, behind closed doors, House Republicans moving to essentially gut their own watchdog....Democrats are outraged. Definitely a sour note to kick off the first day of the new Republican-led Congress.”

In his interview with Conway following Bruce’s report, Stephanopoulos demanded: “Let’s start out with this Congressional action. President-elect Trump famously promised to drain the swamp in Washington. He wanted real reform. Is this what he had in mind? Does he support what they’ve done?...is this the way, to start gutting the independent ethics office?”

In the segment that followed, co-host Charlie Rose asked political analyst Frank Luntz about the topic, prompting Luntz to fret: “What I don't understand is why the first thing they would do would in any way undermine the perception of accountability which is the number one value that American people want to see in Congress.”

While the media were eager to hype fears that Republicans would not be held accountable for corruption, the press repeatedly looked the other way when elected Democrats were embroiled in scandal in recent years. A 2014 Media Research Center study listed numerous examples of Democratic corruption swept under the rug by the networks.

Here are excerpts of the January 3 coverage on NBC, ABC, and CBS: 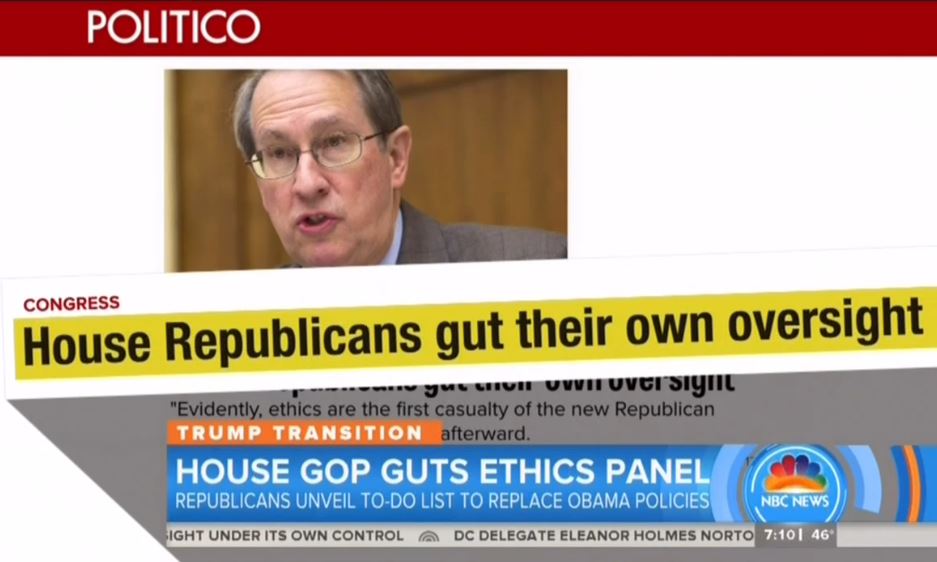 MATT LAUER: Let us turn to politics now. Lawmakers are back on Capitol Hill this morning, returning from the holidays with a packed agenda ahead of President-elect Trump's inauguration in just 17 days. We're going to talk to one of his top advisors, Kellyanne Conway, in just a couple of minutes, but let us begin with NBC’s Hallie Jackson on Capitol Hill. Hallie, good morning to you.

HALLIE JACKSON: Hey there, Matt, good morning to you. Republicans are raring to get going here on Capitol Hill, now in control of both chambers and soon the White House. Their to-do list feeling like a mile long, but even before this new Congress gets into full swing, the GOP is making a move getting slammed by Democrats as a backtrack on Donald Trump's promise to drain the swamp.

Congress counting down and already courting controversy. House Republicans in a surprise move bucking their leadership to gut an independent ethics office created eight years ago after a series of congressional scandals.

RICHARD PAINTER [FORMER WHITE HOUSE CHIEF ETHICS LAWYER]: Rein in its independence and put it under the House Ethics Committee, which I call the fox-in-charge-of-the-chicken-coop committee.

JACKSON: That new move, slammed by Democrats, set to be voted on today, as the 115th Congress gets sworn in with plenty on their plate. 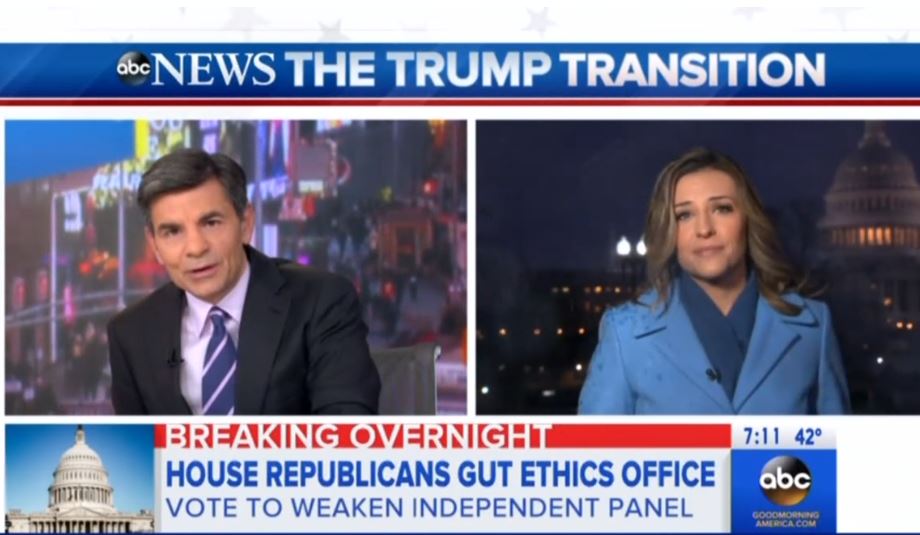 GEORGE STEPHANOPOULOS: But now to the new Congress. It’s back with its first day of business and so much on its plate from repeal of ObamaCare, tax reform, confirming Trump nominees. Let's bring in our congressional correspondent Mary Bruce. Mary, even before the official swearing in today, the House GOP voted overnight to take away the power and independence of the congressional ethics office.

MARY BRUCE: George, this came as a huge surprise. Late last night, behind closed doors, House Republicans moving to essentially gut their own watchdog. The independent ethics office was created to keep lawmakers in check, to help investigate allegations of their own wrongdoing. But now, Republicans want to move that office into their own control, saying it on will create a fairer process. Democrats are outraged. Definitely a sour note to kick off the first day of the new Republican-led Congress. 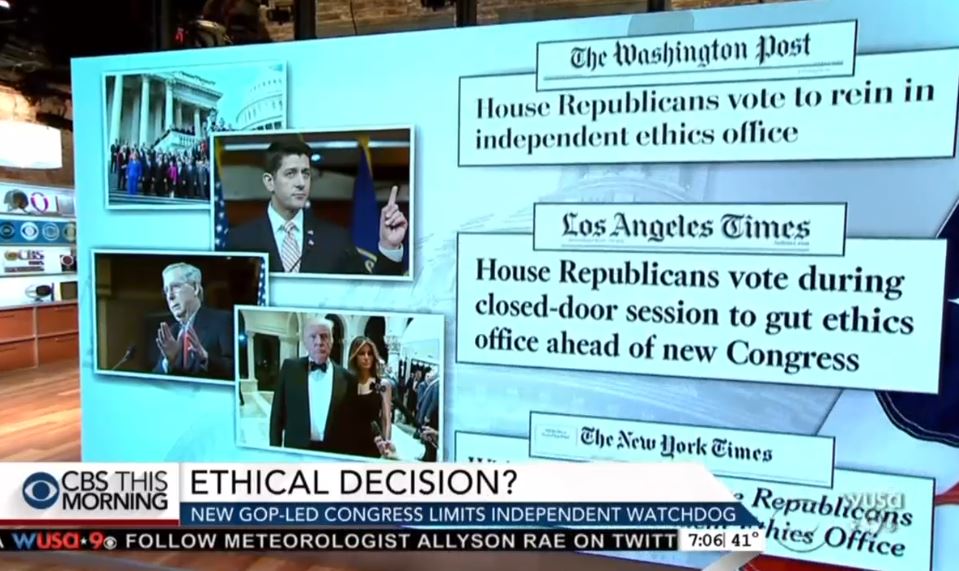 GAYLE KING: The 115th Congress will be sworn in today. Republicans control both the House and the Senate. When President-elect Donald Trump takes office it will be the first time in a decade that the GOP is in charge of Congress and the White House. In a surprise move, House Republicans made ethics oversight their first piece of business. They voted behind closed-door to put the independent watchdog of congressional ethics under the control of a Republican-led committee. Nancy Cordes is on Capitol Hill. She's got details of last night's controversial vote. Nancy, good morning.

NANCY CORDES: Good morning. Republicans say they were simply responding to concerns from some lawmakers who said they were unfairly targeted by this independent ethics committee. But Democrats called the surprise move crippling and said it will make it more difficult for Congress to police itself.

The measure was proposed by Judiciary Chairman Committeeman Bob Goodlatte. It reins in a watchdog put in place by Democrats in 2008 after the investigation of Republican lobbyist Jack Abramoff led to his conviction and exposed a ring of corruption. Democratic leader Nancy Pelosi released a statement last night saying, “Republicans claim they want to drain the swamp. But the amendment Republicans approved tonight will functionally destroy this office.” Even House Speaker Paul Ryan spoke out against the measure which would rename the Office of Congressional Ethics, the Office of Congressional Complaint Review, barring it from investigating anonymous tips and giving a separate ethics committee run by lawmakers the power to end any investigation of their colleagues.