ABC Only Offers Seconds on Obama’s Cash to Ayatollahs Scandal

While both NBC’s Today and CBS This Morning devoted full reports to The Wall Street Journal exposing the Obama administration secretly paying a $400 million ransom in cash to Iran to secure the release of American hostages, ABC’s Good Morning America only managed two news briefs on the topic that amounted to less than a minute of air time.

GMA news anchor Amy Robach promoted the story as a “bombshell report...that claims the Obama administration secretly sent $400 million in cash to Iran just as the Iranians freed four American prisoners.” However, the 7:14 a.m. ET hour segment only lasted 33 seconds. At the top of the 8 a.m. ET hour, Robach repeated the same brief in just 23 seconds.

Here are transcripts of the 56 seconds of coverage the scandal received on the August 3 edition of the ABC morning show: 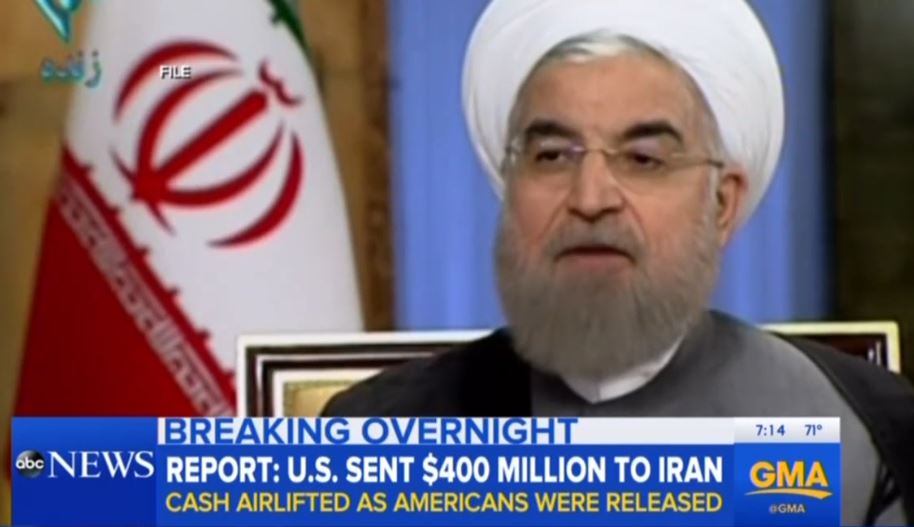 ROBIN ROBERTS: Gonna go now to Amy with the morning’s other top stories, starting with a big cash payout to Iran.

AMY ROBACH: Yeah, this is a bombshell report this morning that claims the Obama administration secretly sent $400 million in cash to Iran just as the Iranians freed four American prisoners – this happened back in January.

The State Department denies it was ransom and says that cash was all part of a settlement stemming from a failed arms deal from 1979. Officials tell The Wall Street Journal Iranian negotiators wanted the cash as a sign of good faith.

AMY ROBACH: Well, this morning, the State Department is denying that a shipment of cash to Iran this year was ransom for the freedom of four American prisoners. The Wall Street Journal reports the Obama administration airlifted $400 million to Iran just as the American prisoners were being released in January. But State Department officials say the payment was part of a settlement stemming from a failed 1979 arms deal.

NBC’s Today provided a full 2 min 28 sec report on the controversy, followed by a 23 second news brief in the 8 a.m. ET hour. The report featured sharp criticism of the nuclear deal:

SAVANNAH GUTHRIE: Another major story this morning, a stunning new report tied to January's release of Americans who were detained in Iran. Now there is word that the U.S. sent $400 million cash to Iran on the same day those hostages were freed. NBC’s Kelly Cobiella has more on this story this morning. Kelly, good morning to you.

KELLY COBIELLA: Good morning, Savannah. That’s right, new controversy over that Iran deal struck earlier this year. The Wall Street Journal citing U.S. and European officials and congressional staff, reporting this morning that the U.S. made a secret airlift of cash into Iran the very weekend the deal was finalized.

After decades of animosity, a nuclear deal and a hostage release on the same day. Among those coming home, Washington Post reporter Jason Rezaian, held prisoner in Iran more than 18 months. What wasn’t seen, according to The Wall Street Journal, an airlift of $400 million in cash to Iran, the first installment of a settlement over a failed arms deal with the Shah of Iran, toppled during a revolution in 1979. President Obama hailed the event as a breakthrough.

BARACK OBAMA: Nuclear deal implemented. American families reunited. The third piece of this work that we got done this weekend involved the United States and Iran revolving a financial dispute that dated back more than three decades.

COBIELLA: Now, criticism about the payment, reportedly pallets of bills on an unmarked cargo plane, and about the timing. Senator Tom Cotton, a Republican fiercely opposed to the Iran nuclear deal, accused the government of paying for hostages. The White House replying, “The negotiations over the settlement of an outstanding claim...were completely separate from the discussions about returning our American citizens home.”

And there is still more to be paid from that settlement, $1.7 billion was the total settlement. Meantime, the U.S. is investigating the arrest of at least two Iranian Americans in Iran. And Donald Trump already weighing in on this in a tweet, calling Secretary of State Hillary Clinton “incompetent.” “Our incompetent Secretary of State,” he tweets, “Hillary Clinton, was the one who started talks to give $400 million in cash to Iran. Scandal!,” he says. Savannah?

CBS This Morning had a 2 minute 53 second report on the revelation:

GAYLE KING: There are new questions this morning about the Obama administration’s dealing with Iran after a reported 400 million cash payment to Tehran. The Wall Street journal first reported the payout last night. It happened in January around the same time that four Americans detained in Iran were released. Margaret Brennan is at the White House with why one lawmaker calls this ransom. Good morning, Margaret.

MARGARET BRENNAN: Good morning. Well, the Obama administration has long said that a nearly $2 billion settlement with Iran was unrelated to the prisoner release, even though they happened at the same time and also coincided with the implementation of that land mark deal to freeze Iran's nuclear program. When Iran released four American prisoners in January, including journalist Jason Rezaian and former Marine Amir Hekmati, it was heralded as a diplomatic breakthrough. A coalition of Congressmen met three of the Americans in Germany at Landstuhl Regional Medical Center.

REP. ROBERT PITTENGER (R-NC): We made a price in a major way to bring them home.

BRENNAN: The administration strongly denied paying any ransom, but according to new details reported by Wall Street Journal, $400 million in cash was flown into Tehran on a cargo plane around the same time that the Americans were handed over. It was loaded with Euros, Swiss Francs and other currencies, since any transaction with Iran in dollars is illegal under U.S. law. Senior U.S. officials claim the timing was coincidental and just the first payment of a separate $1.7 billion settlement. At the time, President Obama did not provide details, but did say the money was meant to settle an outstanding legal dispute from before the 1979 Islamic revolution.

BARACK OBAMA: With a nuclear deal done, prisoners released, the time was right to resolve this dispute as well.

BRENNAN: But the administration never consulted Congress, according to Republican Congressman Ed Royce, who accused the White House of paying ransom to a state sponsor of terrorism. As details became public, Tuesday, there were instant reverberations on the campaign trail. Republican Vice Presidential nominee Mike Pence.

MIKE PENCE: The administration air-lifted $400 million in cash to Iran. you know, we cannot have four more years accommodating and apologizing to our enemies or abandoning our friends.

BRENNAN: Now the brother of prisoner Jason Rezaian released this statement to CBS News saying he is thankful for his brother's release but the “publication of these additional details, there can be no doubt that Jason's treatment and other Americans was a cruel abuse of innocent Americans. Let us not forget that Iran incorrectly imprisons at least four U.S. citizens and residents as well as British and French and Canadian nationals.”

In sharp contrast, when the Iran nuclear deal barely survived a veto in the Senate in September of 2015 the media celebrated it as a “major victory” for the President that would define his “legacy.”