On Monday, all three network morning shows were eager to second guess the Dallas Police Department’s decision to use a bomb delivered by robot to kill ambush sniper Micah Johnson and fretted over the militarization of police across the country.

At the top of CBS This Morning, with the headline “Questionable Tactics” emblazoned across the screen, co-host Gayle King worried: “And questions about how the Dallas Police Department ended the standoff with the gunman. Did they go too far delivering a bomb by robot?” Teasing the story later in the show, King declared: “Critics say that the technology is a step toward making police into a military force.”

Introducing the full report on the topic, fellow co-host Norah O’Donnell highlighted: “Other departments with similar capabilities are being criticized for using devices described as military-style hardware.” Correspondent Chris Van Cleave noted: “...critics say robots like these were designed for military combat.”

Soundbites followed of Peter Asaro of the International Committee for Robot Arms Control: “It raises a lot of concern about the increased weaponization of robots that police use....Once I think police departments have these kinds of weapons in their arsenal, it provides an opportunity to use them in a lot of different kinds of scenarios.”

On NBC’s Today, co-host Savannah Guthrie remarked on “the unique way police put an end to the killings in Dallas last week” by “borrowing a tactic from America’s wars in Iraq and Afghanistan.”

Correspondent Tom Costello acknowledged: “By and large, the Dallas PD is being applauded for using innovative tactics to put an end to the killing.” However, he warned: “The discussion really is about how this is just the latest example of law enforcement turning to military tactics for domestic policing and whether that’s simply what comes with a more heavily armed society.”

Like on CBS, Costello teed up critics of the tactic: “Since 9/11, many police departments have beefed up their firepower. Some departments criticized for showing up at lawful demonstrations in armored personnel carriers with semi-automatic weapons. Now for the first time, using a remotely controlled robot to set off a plastic explosive.”

A clip played of University of Washington Law Professor Ryan Calo lecturing: “I think police departments all over the country should be very careful how they use these kinds of technologies. Confronting our own civilians with military-style equipment is probably the biggest problem here.”

Wrapping up a report on ABC’s Good Morning America, correspondent Matt Gutman pointed out: “At 1:30 a.m., police fatally wounding Johnson with a robot-borne bomb, killing him. A tactic that triggered protests around Dallas Sunday.” He pressed Dallas County Judge Clay Jenkins: “The use of that robot bearing the bomb was controversial. Do you think it was warranted?” Jenkins replied: “I do believe it was warranted. It saved lives, it would have been a tragedy for more officers to lose their life.”

Gutman still wrung his hands over the move: “Now, authorities decided to go ahead and detonate that bomb despite the fact that they knew that there were people inside that college at the time. They had apparently become trapped there when the school went on lockdown, but all of them were evacuated unharmed.”

Here is a full transcript of the July 11 CBS report: 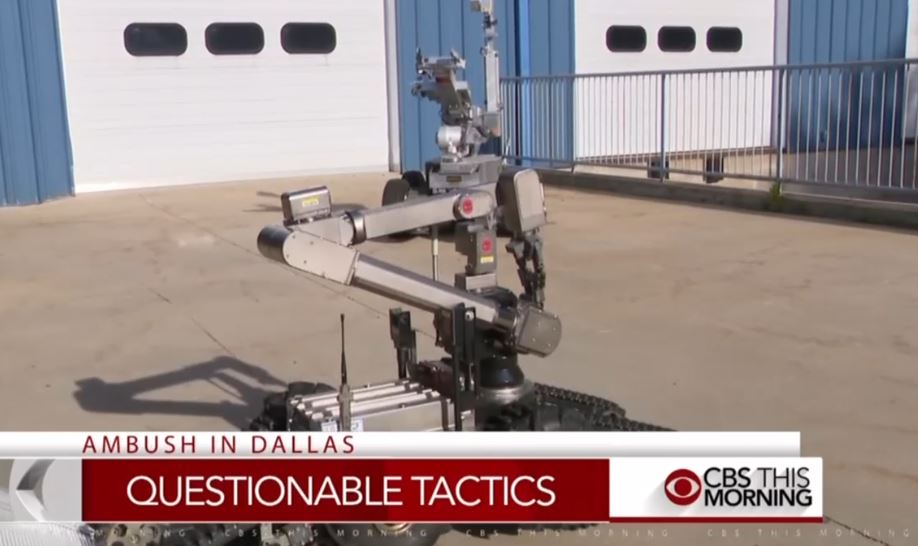 GAYLE KING: And questions about how the Dallas Police Department ended the standoff with the gunman. Did they go too far delivering a bomb by robot?

KING: Coming up in this half hour, Dallas police are questioned for using a robot to kill the ambush sniper suspect. Critics say that the technology is a step toward making police into a military force. We're going to take you to a training center where instructions say – where instructors say, rather – that these robots can save your life.

NORAH O’DONNELL: Dallas police face questions over the way they took out the suspect in Thursday's ambush. Police sent a robot armed with explosives to kill the gunman. Other departments with similar capabilities are being criticized for using devices described as military-style hardware. Chris Van Cleave is in Rockville, Maryland, where officers are training with a robot similar to the one in Dallas. Chris, good morning.

CHRIS VAN CLEAVE: Well, good morning. Bomb squads will tell you these robots can do pretty much anything a person can do. They can go up stairs, have cameras, they have speakers so that they can communicate, they also have these arms. And those arms would typically be used to investigate a suspicious package, but some police departments have used them to do things like deliver tear gas to subdue a suspect. But for a police department to use a robot to kill, that was unprecedented.

Hours after Micah Johnson opened fire in downtown Dallas, he was cornered by police. He told negotiators there were bombs around the city and he threatened to kill more officers. The Dallas mayor says there were no other options than to send in a robot strapped with the explosive C-4.

MIKE RAWLINGS [DALLAS MAYOR]: We asked him, “Do you want to come out safely or do you want to stay there and we're going to take you down?” And he chose the latter.

[TO GOLDSTEIN] Do you feel these things save lives?

SCOTT GOLDSTEIN: These things clearly save lives. They can be repaired, they can be replaced. Can't replace a highly trained and experienced, you know, member of the squad.

VAN CLEAVE: But critics say robots like these were designed for military combat.

PETER ASARO: It raises a lot of concern about the increased weaponization of robots that police use.

ASARO: Once I think police departments have these kinds of weapons in their arsenal, it provides an opportunity to use them in a lot of different kinds of scenarios.

DAN MONTGOMERY: I thought it was ingenious.

VAN CLEAVE: This 54-year veteran police chief Dan Montgomery compares the Dallas Police Department's use of the robot to a high-tech version of sniper fire.

MONTGOMERY: If you’ve got a robot that has C-4 explosives, someone's got to detonate that. So it's the same as pulling a trigger.

VAN CLEAVE: Montgomery County is one of about 40 fire departments in this country that operates its own bomb squad. Chief Goldstein says he doesn't see these as killer robots, in part because they're operated by a person back there in that truck and they don't come weaponized. Also, they can cost in the vicinity of $60,000 apiece. Charlie?