As CBS and ABC Move On, NBC Continues to Hype GOP Congressman's Tussle With Reporter

NBC's Today on Thursday decided to make Republican Congressman Michael Grimm's verbal attack on a reporter after Tuesday's State of the Union a two-day story, with fill-in co-host Tamron Hall proclaiming: "Well, there's more fallout this morning from an ugly scene following the President's State of the Union address." [Listen to the audio or watch the video after the jump]

The additional "fallout" that Hall mentioned was simply the Congressman offering an apology to New York One reporter Michael Scotto. In the report that followed, Capitol Hill correspondent Kelly O'Donnell declared: "Democratic critics say the Congressman is a hot head who should play a political price for his behavior. The Congressman tells me this was emotion that got the better of him after a very long day. Whatever the anger management issues were, he's trying to defend himself now."

In contrast, Thursday's CBS This Morning only briefly mentioned Grimm's apology in a ten-second headline, while ABC's Good Morning America skipped the story all together.

All three network evening newscasts on Wednesday covered the controversy, but completely ignored the Republican response to President Obama's State of the Union.

The networks also refused to fact-check the presidential address.

In her Today report, O'Donnell played footage of herself chasing Grimm through the halls of the Capitol to get him to apologize repeatedly: 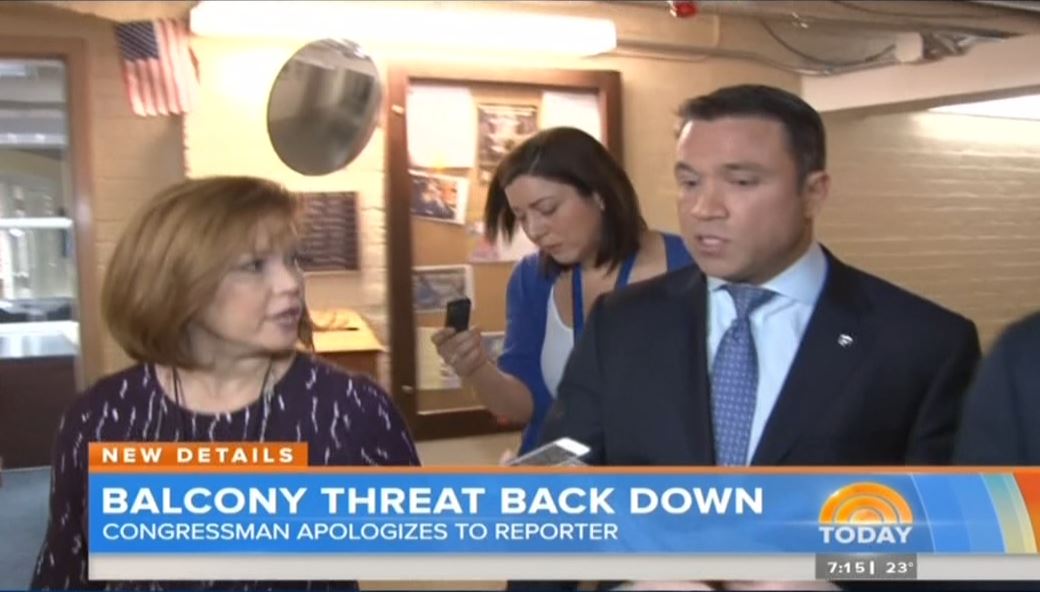 O'DONNELL: I caught up with Grimm Wednesday...

O'DONNELL [TO GRIMM]: Do you regret what took place?

O'DONNELL: ...when he blamed his behavior on a long day and his own passions.

GRIMM: You're emotions can get the better of you and there's no excuse-

O'DONNELL [TO GRIMM]: But you're passion really was in the form of a threat. You made a threat.

GRIMM: There's no excuse for it, you know, and Michael Scotto was very gracious and he – he was gracious enough to accept my apologies.

O'Donnell wrapped up the segment by noting: "Speaker Boehner's office said it was right for Congressman Grimm to apologize. And that may be the end of it....as far as any sort of official action after this outburst." Hall replied: "It's still hard to believe that happened."

The NBC morning show brought up the story again at the top of the 9 a.m. ET hour, when co-hosts Willie Geist, Natalie Morales, and Al Roker launched into an extended discussion over Grimm's apology.

Geist started to explain: "He is apologizing, this is Congressman Michael Grimm, Republican from Staten Island here in New York." Roker interjected: "He certainly was." That prompted laughter in the studio.

After playing a montage of Grimm apologizing and re-apologizing for his behavior to O'Donnell, Roker reasonably observed: "You know what? He apologized and that's it. It's done." A skeptical Morales replied: "You think so?"

During her earlier report, O'Donnell mentioned that the reporter Grimm admonished was "willing to move on." Is NBC prepared to do the same?