While NBC News continued to ignore the trial of Philadelphia abortionist Kermit Gosnell on its airwaves, an NBCNews.com article posted Saturday made brief mention of the media blackout: "Conservative bloggers, including at RedState and National Review, have lashed out this week at national media organizations for not paying enough attention to the gruesome trial of a Philadelphia abortion provider accused of killing seven late-term fetuses after they were born alive."

Careful to use the term "fetuses," rather than "infants" or "children," staff writer Erin McClam did not address the validity of the criticism or acknowledge the fact that her network has refused to give any air time to the trial. 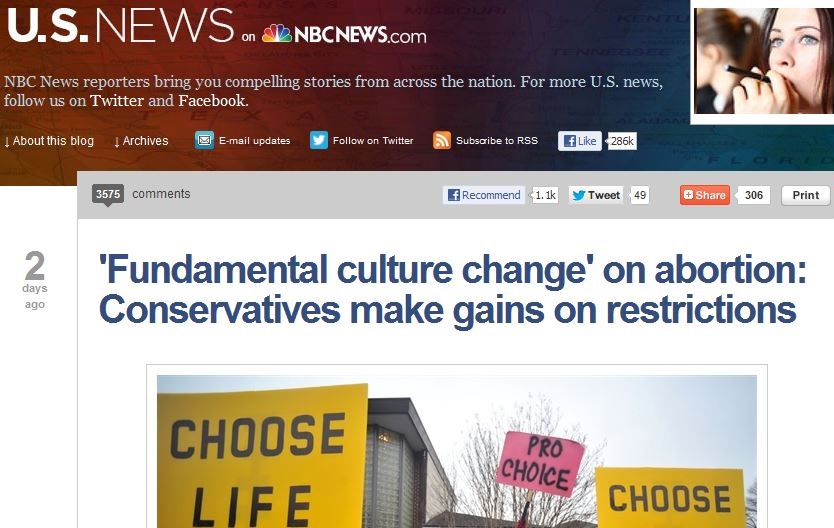 The mention of Gosnell was part of a story on the "fundamental culture change" against abortion taking place in the United States following a string of states passing pro-life legislation. McClam fretted:

When Virginia approved restrictions that could force abortion clinics to close, it joined a rapidly growing list of states that are energizing social conservatives by making it more difficult for women to terminate pregnancies.

Four other states have tightened abortion restrictions in less than two months – part of what abortion-rights groups say is an alarming trend since Republicans swept the 2010 elections. The American Civil Liberties Union on Friday called the Virginia restrictions "excessive and inappropriate."

McClam also cited a recent NBC News/Wall Street Journal poll on the issue: "[It] found that 52 percent of Americans believe abortion should be illegal with some or no exceptions, compared with 45 percent who believe it should be legal most or all of the time."

While NBC used that poll on air to tout findings showing support for gun restrictions, it failed to make any mention of public support for limiting abortion.

McClam concluded her article by forwarding a political threat from Ilyse Hogue, president of NARAL Pro-Choice America: "[She] pointed out that three dozen governorships will be decided in the 2014 election, and suggested the restrictions passed over the past few weeks would wake up voters. 'What we're seeing here is an extreme position about women's rights that was soundly rejected in the 2012 election at the federal level,' she told MSNBC. 'These governors should be watching very, very carefully.'"