In a bizarre attempt to make Facebook founder Mark Zuckerberg wearing a hoodie at a recent Wall Street meeting into a racial issue, on Thursday's NBC Today, attorney and panelist Star Jones decried the supposed "hypocrisy" of it all: "...when we talk about Mark Zuckerberg, rich white guy, wearing a hoodie, we call him brainy and self-confident....But when a young black kid walks down the street in a hoodie, that's ghetto." [Listen to the audio or watch the video after the jump]

Even fellow liberal panelists, advertising executive Donny Deutsch and NBC medical editor Nancy Snyderman, thought Jones was completely off-base. Deutsch immediately dismissed her assertions: "Whoa, whoa....Okay, first of all, I don't know why this is a black/white issue....I love you like a sister, but you do this a lot....this is not a racial issue." Jones declared: "...don't interrupt me about an issue that means something to me and to the rest of the world."

Deutsch was probably referring to a May 2 panel discussion with Jones, in which she claimed that an ad by conservative PAC Crossroads GPS attacking President Obama for being a celebrity was somehow racially motivated: "...what worries me is that it's another attempt to paint Obama as an 'other.'" Deutsch countered: "I hope this is not a black/white issue....Star, you're misreading."

On Thursday, Snyderman joined Deutsch in criticizing Jones: "Star, you're – you're whacked out right now." Jones shot back: "No, you're not – you're just not living in the truth. There's a difference."

Here is a transcript of the exchange:

SAVANNAH GUTHRIE: Let's move on to Mark Zuckerberg, speaking of sweating, sweatshirt, hoodie, thanks for the segue. So here he is, this is the big week of the Facebook Initial Public Offering. He goes to Wall Street, meets with these high rollers, these big investors, and he's wearing his uniform, the hoodie and jeans.

GUTHRIE: I'm going to start with our branding guy. I know it's his brand, but should he have worn something more suited to the occasion?

DONNY DEUTSCH: First of all, it wouldn't have made a difference. Second of all, no. That you just said it, it's his brand. It's Steve Jobs and the black – the whole Facebook essence is, "We are this exclusive billion-person club that's thumbing our nose at the rest of the world." If all of a sudden he showed up in a suit and tie, you go, 'What? This is not Facebook.' They would lose the patina of, 'We are something special.' So I actually think, although I find him incredibly annoying, I just – something about him, I just want to go like this to his nose, I don't-

NANCY SNYDERMAN: He did put on a sport coat when he met the President in a private setting.

SNYDERMAN: And he was basically told to because, you know, that's out of respect of the office of the presidency. But having lived in that part of California, there is this feeling that, you know, you east-coasters do whatever you want, but guess what? We're making things happen out here and we are the nonconformists.

GUTHRIE: Can you be true to you're brand, but occasionally know that a situation requires something?

STAR JONES: Wait, Savannah, do you even see the hypocrisy here? That when we talk about Mark Zuckerberg, rich white guy... 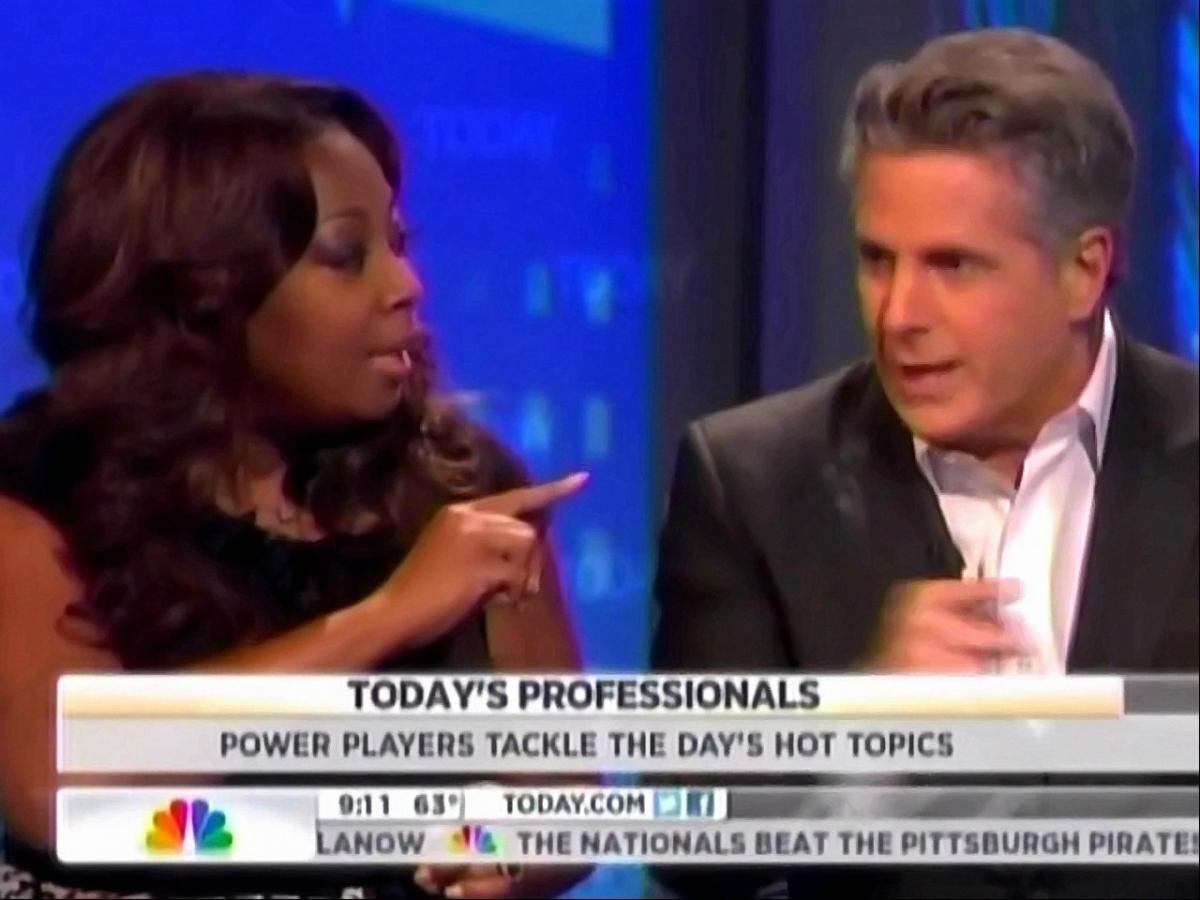 JONES: ...wearing a hoodie, we call him brainy and self-confident. And he's the man making things happen. But when a young black kid walks down the street in a hoodie, that's ghetto. That's urban.

DEUTSCH: Okay, first of all, I don't know why this is a black/white issue.

JONES: And you know what?

DEUTSCH: By the way, we're putting him down for wear-

JONES: No, no. You don't – don't interrupt me about an issue that means something to me and to the rest of the world.

DEUTSCH: But this is not a racial issue.

DEUTSCH: But we're looking at it as negative here for a different reason.

JONES: No, but you're not looking at it-

DEUTSCH: It's not like, "Oh, he's great because of a hoodie and the other guy's a criminal."

JONES: Excuse me, I read the New York Times, they called him brainy and self-confident.

SNYDERMAN: Yeah, but Star it's still-

JONES: And that's what that whole Silicon Valley thing is about.

SNYDERMAN: Star, you're – you're whacked out right now.

JONES: No, you're not – you're just not living in the truth. There's a difference.

GUTHRIE: Well, let me throw something else at you really quick. Let's do it on the basis of gender. What if a woman's brand was to wear a certain kind of clothing, maybe hot pants for all I know, and she goes and takes meetings on Wall Street.

GUTHRIE: Now Donny's interested. But, I mean, do you think there would be a double standard there?

SNYDERMAN: And guess what? They're going to go ahead and be phenomenally successful.

JONES: And he's going to get paid.