Palin Calls Out Media for Implicating Her in Tucson Shooting, CBS Has Amnesia

On Tuesday's CBS Early Show, congressional correspondent Nancy Cordes reported on Sarah Palin's first interview since the Tucson shooting: "She accused the Left and the news media of trying to destroy her message, trying to destroy her, said she was being accused of being an accessory to murder." Cordes forgot to mention her role in furthering those accusations against the former Alaska governor.

After playing a clip of Palin's Monday interview on Fox News' Hannity, Cordes mentioned: "The early response I'm hearing from some on the Left about this interview is, 'Look we never said she was an accessory to murder, we simply said she was an accessory to in-civility in politics.'" On the day of the shooting, reporting for the CBS Evening News, Cordes implied Palin played a role in inciting the violence: "Giffords was one of 20 Democrats whose districts were lit up in cross hairs on a Sarah Palin campaign Web site last spring. Giffords and many others complained that someone unstable might act on that imagery." 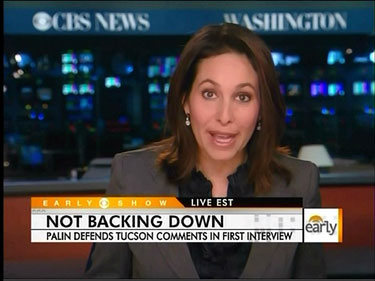 Introducing the segment with Cordes, co-host Chris Wragge declared: "This morning Sarah Palin isn't backing down from some controversial statements she made in the wake of the Tucson shootings." Apparently, only Palin's defense of herself was "controversial," not the media coverage that initially accused her of causing the tragedy.

During a news brief in the 8AM ET hour, news reader Jeff Glor remarked that: "After the Tucson shooting, Sarah Palin was criticized by some." Like Cordes, he forgot to mention that CBS News was one of those critics. He then noted how Palin "said her political action committee's use of cross hairs to identify swing districts, including Gabrielle Giffords, has been used before, she says, by Democrats....that Democrats have used cross hairs to target Republican districts on maps." Despite the numerous times CBS reports in the wake of shooting displayed Palin's campaign map of targeted Democratic districts, Glor was unable to produce an image of the Democratic Leadership Council's 2004 map placing bull's eyes over Republican districts.

Despite CBS's role in promoting uncivil and unproven charges against Palin, following his discussion with Cordes, Wragge suggested they were the arbiters of civil discourse: "It's going to be very interesting to see over the next couple of days just how civilized the tone in this new Washington is now." Fellow co-host Erica Hill went further: "Yes, on both sides, how everyone can continue that pledge. We will be watching with a trained eye, that's for sure, as will Nancy and our folks in Washington." Turning to the 7AM ET hour news headlines, Glor remarked: "Always civilized here, right guys?" Hill replied: "Always."

Here is a full transcript of Cordes's January 18 discussion with Wragge:

CHRIS WRAGGE: Not backing down. As Congress heads back to work with a vow to be more civil, Sarah Palin defends herself in her first television interview since the Tucson shootings.

SARAH PALIN: I know that a lot of those on the Left hate my message and they'll do all that they can to stop me because they don't like the message.

CHRIS WRAGGE: This morning Sarah Palin isn't backing down from some controversial statements she made in the wake of the Tucson shootings. Meanwhile, the Republican-led House of Representatives gets back to work today, promising to be more polite but no less aggressive in trying to push their agenda. CBS News congressional correspondent Nancy Cordes is in Washington this morning for us. Nancy, good morning to you.

[ON-SCREEN HEADLINE: Back to Work; GOP to Fight Healthcare In House]

WRAGGE: Well, let me ask you, how are things going to be different on Capitol Hill now with this debate, these contentious debates, that take place in the wake of the tragedy in Tucson?

CORDES: Well, I think you will see some changes, at least at first, Chris. The rhetoric has already been a little softer, a little more measured. There's this movement, as you've heard, to have Republicans and Democrats sit among each other at the President's State of the Union address instead of having one party on the left and the other party on the right. You've even heard Republicans praising the President's speech in Tucson, saying that he struck the right note there. So I think both sides are trying to be a little less caustic, we'll just have to see if it sticks.

WRAGGE: The first order of real business, repealing health care. How tame a debate can people expect with two sides that are just so bitterly divided?

CORDES: Yes, so this will really be a test of their new resolve, because there's almost no issue that divides them like health care. And the press releases are already flying in advance of this debate. The Democrats have even launched new ads attacking Republicans for trying to repeal the bill. So I expect that this debate will be a heated one. It just might not be as venomous as it would have been otherwise.

WRAGGE: Let's talk about Sarah Palin here for a moment, she gave her first TV interview since the Tucson shootings to Fox News last night. What did she have to say?

SARAH PALIN: That came up right away, that, 'Oh, it must be a cause of this horrendous evil act of this shooter that perhaps he saw that map and that incited him towards violence,' which of course is ridiculous and, again, it's not an original use of an icon or a graphic. I will continue to speak out. They're not going to shut me up, they're not going to shut you up or Rush or Mark Levin, or Tea Party patriots or those who, as I say, respectfully and patriotically petition their government for change.

WRAGGE: Well, we will hear a whole lot more about that all day today, I'm sure. Nancy Cordes in Washington for us this morning. Nancy, thank you very much.

WRAGGE: It's going to be very interesting to see over the next couple of days just how civilized the tone in this new Washington is now.

ERICA HILL: Yes, on both sides, how everyone can continue that pledge. We will be watching with a trained eye, that's for sure, as will Nancy and our folks in Washington.

WRAGGE: Want to get you a closer look this morning at some of the other headlines that we're following on this Tuesday. Jeff Glor standing by at the news desk. Jeff, good morning.

— Kyle Drennen is a news analyst at the Media Research Center. You can follow him on Twitter here.