On Tuesday's CBS Early Show, co-host Harry Smith interviewed former Arkansas Governor Mike Huckabee and questioned the ability of tea party candidates to be effective in office: "...when it's time to govern, can anger govern? Or better yet, how about this one, if a tug-of-war starts between the tea party folk and the mainstream Republicans, who's going to win that tug-of-war?"  [Audio available here]

Smith played up potential division in the GOP in a previous question: "...a very interesting conundrum for the Republicans....tea party supporters themselves...84% say there is a lot or some difference between them and Republicans. This is not going to be an easy thing to fold in these folks once they get in office."

In response to Smith's "anger" question, Huckabee observed: "Political parties are to serve people, not to lord over them. The Democrats are in trouble because they just went ahead and did what they wanted to do and recklessly and irresponsibly disregarded their bosses."

In a prior report by congressional correspondent Nancy Cordes that focused on the West Virginia Senate race, every sound bite was from a Democrat. The report featured six sound bites from Democratic West Virginia Governor and Senate candidate Joe Manchin, one sound bite from Democratic Kentucky Senate candidate Jack Conway, and one of former President Bill Clinton campaigning for Manchin. All that despite Cordes's admission that "Democrats are playing defense all over the map in this final stretch. 12 of their Senate seats are at risk, compared to just five Republican seats."

Cordes acknowledged that President Obama "is deeply unpopular" in West Virginia and noted how a number of candidates, like Conway, are "putting the President at arm's length." However, she concluded her report by declaring: "Now, there are many places where President Obama is being welcomed by candidates. In fact, he's campaigning in four states over the next seven days." Cordes then added: "...one candidate we haven't seen out on the campaign trail stumping for fellow Republicans, however, is George W. Bush." 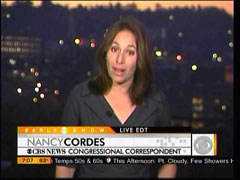 During a news brief in the 8AM ET hour, Cordes finally gave some attention to Republican candidates, but only to tout them being bogged down in controversy. She proclaimed: "In Ohio, tea party candidate Rich Iott would love to get the conversation back to politics. Instead, it's all about the pictures that emerged over the weekend of him wearing a Nazi SS uniform. He says it's part of a historical re-enactment program meant to educate the public." She then moved to New York: "...another tea party darling, gubernatorial hopeful Carl Paladino, isn't backing down. After taking heat for his outspoken opposition to gay marriage, he made his feelings on gay pride marches crystal clear."

After having described Obama as "deeply unpopular" in states like West Virginia, Cordes concluded her 8AM ET report by dismissing GOP efforts to run against the President: "...voters say they're frustrated by all the distractions. The candidates, they say, are running against Washington and President Obama. When what they want to hear is what they do to help West Virginia."

Here is a full transcript of Smith's October 12 interview with Huckabee:

SMITH: Does this surprise you? Because I'm thinking back to your own candidacy, and when you started running for President out in Iowa, several summers ago, it occurs to me that you were tapping in to some of the same stuff that seems to be rising up across the country right now.

HUCKABEE: Yeah, I was four years too early, Harry, obviously. But I think that there was a sense of discontent that was beginning to brew, and I was speaking to it. But obviously it's grown. And I think that sometimes people mistake the tea party movement as being some Republican movement. What it really is, it's a citizen's uprising. It's a matter of voters who are watching their government do what they know they can't do on their own businesses and households, and that's spend money they don't have and borrow money they can't afford to pay back.

SMITH: Which ends up creating a very interesting conundrum for the Republicans, because they are certainly going to welcome the change in all of these seats that are projected in both the House and in the Senate. But if you look at some of the polling numbers, tea party supporters themselves say there is a lot or some – 84% say there is a lot or some difference between them and Republicans. This is not going to be an easy thing to fold in these folks once they get in office.

HUCKABEE: Well, Republicans need to understand that it's not that the tea party, or the American people in a whole, are in love with them. They're just so angry that the Democrats have shoved down bailouts on them, ObamaCare that they didn't want, overwhelmingly rejecting it. They're tired of the stimulus bills that have really cost jobs. Unemployment is still hovering near 10%, 9.6% last week, with a net job loss. Every month the economists say, 'we're so surprised we're losing jobs.' When the economists every month are wrong maybe they're the ones that need to be unemployed because they haven't gotten it right yet.

And I think that what we're really seeing though, Harry, is that, to me, this is an affirmation of the greatness and the genius of our founders. They created America to be a self-cleaning oven so that when things get really nasty and the politicians gunk it up, the citizens can turn up the heat, and then come November the 2nd we're going to open the oven door, sweep out the ashes and give it a new start.

SMITH: Here's my question, though, but when it's time to govern, can anger govern, or better yet, how about this one, if a tug-of-war starts between the tea party folk and the mainstream Republicans, who's going to win that tug-of-war?

HUCKABEE: Well, the people ultimately win, and that's the good news for America. Political parties are to serve people, not to lord over them. The Democrats are in trouble because they just went ahead and did what they wanted to do and recklessly and irresponsibly disregarded their bosses. If the Republicans, who have done this in the past – and that's why they got booted out in '06 and '08 – if they do it again, then I think, you know, we could be looking at an unusual political climate. If the Republicans even have so much as a single-digit IQ after this election, they're going to go in and cut spending, they are going to do something significant to show that they really mean business when it comes to making government responsible again. Which it hasn't been for a very, very long time, Harry.

SMITH: Former Arkansas Governor Mike Huckabee, appreciate your time this morning. And your insight. Good to see you.

HUCKABEE: Thank you very much, Harry.

—Kyle Drennen is a news analyst at the Media Research Center. You can follow him on Twitter here.