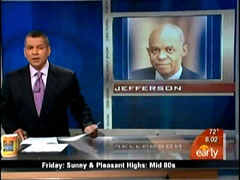 On Thursday, all three network morning news programs reported the conviction of former Louisiana Congressman William Jefferson on bribery charges, but only NBC’s Today identified him as a Democrat. CBS’s Early Show and ABC’s Good Morning America simply referred to him as a "former congressman."

In contrast, Wednesday’s NBC Nightly News did not provide a Democratic label for Jefferson, while ABC’s World News did identify his party affiliation. The CBS Evening News made no mention of the conviction. While both Good Morning America and Today featured news briefs early in the 7AM ET hour on Thursday, The Early Show did not mention the story until early in the 8AM hour.

While CBS finally managed that single news brief Thursday morning, reporter Russ Mitchell framed the story in the context of Jefferson’s attorney appealing the decision: "A lawyer for former Louisiana Congressman William Jefferson says he will appeal Jefferson’s conviction on 11 counts of bribery, racketeering, and money laundering." Neither Today nor Good Morning America mentioned the appeal.

RUSS MITCHELL: A lawyer for former Louisiana Congressman William Jefferson says he will appeal Jefferson’s conviction on 11 counts of bribery, racketeering, and money laundering. A surveillance video shows Jefferson accepting a suitcase filled with $100,000. Prosecutors say Jefferson accepted more than $400,000 in bribes in exchange for brokering deals, mostly in Africa. He faces more than 20 years in prison.

DEBORAH ROBERTS: In other news, former Louisiana Congressman William Jefferson could spend the rest of his life in prison after being convicted of bribery and money laundering. During an FBI sting, he was caught on this surveillance video accepting a suitcase filled with $100,000. Agents later found most of the cash in his freezer.

ANN CURRY: Former Congressman William Jefferson is facing now more than 20 years in prison after being convicted of bribery and money laundering. The case against the Democrat from Louisiana became notorious when investigators found $90,000 in cash in his freezer.