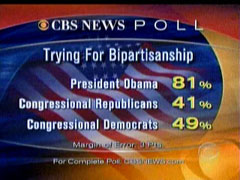 On Thursday’s CBS Evening News, correspondent Chip Reid touted a new CBS News poll that portrayed Barack Obama as being more bipartisan on the current "stimulus" spending bill being debated in Congress, than Republicans: "The new CBS News poll shows 81 percent of Americans think the president is trying for bipartisanship, but less than half say congressional Republicans and Democrats are doing the same." The poll, which separated the president from his fellow Democrats in Congress, claimed 49 percent of Americans felt congressional Democrats were being bipartisan, while only 41 percent said the same of congressional Republicans.

However, those poll findings were not reported on Friday’s CBS Early Show. Perhaps because later Thursday night, speaking at a retreat for House Democrats, Obama declared: "Don't come to the table with the same tired arguments and worn ideas that helped to create this crisis...We're not going to get relief by turning back to the very same policies that, for the last eight years, doubled the national debt and threw our economy into a tailspin...We can't embrace the losing formula that says only tax cuts will work for every problem we face, that ignores critical challenges like our addiction to foreign oil, or the soaring cost of health care, or failing schools and crumbling bridges and roads and levees."

Here is the full transcript of Reid’s report:

KATIE COURIC: Turning now to the health of the economy, the Labor Department reports 626,000 more Americans joined the line for unemployment benefits last week, the most in more than 26 years. They join a record 4.7 million already collecting. President Obama has a plan he says will create jobs but public support for it is shrinking. A CBS News poll out tonight finds it's fallen 12 points this month to just over 50%. But the president is not giving up. Here's Chip Reid.

CHIP REID: The president took direct aim today at Republican critics of his stimulus package, whose ideas, he said, have already been tried and failed.

BARACK OBAMA: And that's precisely what the election we just had was all about. The American people have rendered their judgment and now's the time to move forward, not back.

REID: The new CBS News poll shows 81% of Americans think the president is trying for bipartisanship, but less than half say congressional Republicans and Democrats are doing the same.

REID: Today on the Senate floor, the partisan warfare continued as some Republicans complained that a bill full of wasteful spending is being shoved down their throats.

REID: Democrats fired back that Republicans are trying to tar the bill by focusing on a small number of questionable projects.

DICK DURBIN: That their measures account for one page. One page of this bill.

REID: But as the two parties point fingers, the size of the bill has soared in the Senate, with both parties voting overwhelmingly to add $69 billion to protect the middle class from the alternative minimum tax, $11 billion in tax credits for car buyers, and $19 billion in tax breaks for home buyers, bringing the total to more than $900 billion. Today a bipartisan group of about 16 senators who say they can't support a bill that big, met behind closed doors, seeking up to $100 billion in cuts, which they say is tough going.

BEN NELSON: Nobody said it would be easy, but it's very difficult to try to bring people together.

REID: Late today, the president boarded Marine One on the White House lawn for the first time, unlike past presidents, stopping to shake hands with the marine guard. Minutes later, he boarded Air Force One for his first out-of-town trip as president to a House Democrats' retreat in Williamsburg, Virginia. During the flight, the president, wearing his Air Force One jacket, went to the back of the plane and talked to reporters, sounding confident that a bill in the range of $800 billion will be passed. Katie.