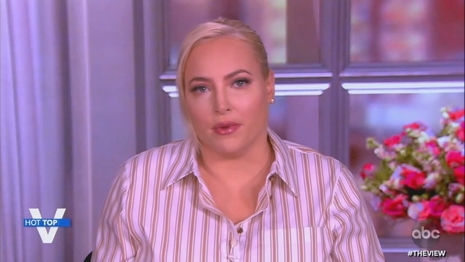 On Monday, Politico Playbook reported that ABC executives are having trouble finding a replacement to fill former co-host Meghan McCain's spot on The View. The conservative left almost six months ago, and they’ve yet to find a co-host who “checks all the right boxes,” wrote Playbook co-author Tara Palmeri.

ABC know a squishy Republican who agrees with the liberal co-hosts won’t get viewers but they are too repulsed by “MAGA” Republicans at the same time. One former show staffer told Palmeri they’re trying to find a conservative “unicorn”:

Sources close to the show said that the search has stalled as executives struggle to find a conservative cast-member who checks all the right boxes. They will not consider a Republican who is a denier of the 2020 election results, embraced the January 6 riots, or is seen as flirting too heavily with fringe conspiracy theories or the MAGA wing of the GOP. But at the same time, the host must have credibility with mainstream Republicans, many of whom still support DONALD TRUMP.

In other words, there’s no good conservative. What the network really wants is a moderate Democrat masquerading as a conservative, like Ana Navarro. But, as per Politico, they know that’s not going to drive ratings:

At the same time, the anti-Trump conservative can’t be seen as too chummy with the other co-hosts, as the network’s market-research shows that the audience wants to see the women spar. Sources said that this has hurt the chances of ANA NAVARRO, a regular fill-in on the conservative chair who worked as a surrogate for JOE BIDEN in 2020: She is perceived by the producers as too friendly with the other hosts and not a traditional Republican.

But finding a conservative co-host who doesn’t view the former President as a saint, or Satan shouldn’t be that difficult. The reality more likely, is that conservatives who could fight back are turning the show down, because they know it would be an unfair match: 4 against 1.

Politico alluded to it as such: “Sources said that the show was eager to recruit young libertarian Kat Timpf, but she turned them down because of the show’s reputation for treating conservatives poorly and her contract with Fox.”

Many former co-hosts have revealed how they were bullied by their co-hosts and the network, behind-the-scenes. That unseen hostility often cropped up on-air when McCain was host.

It wasn’t just McCain. The less abrasive Jedediah Bila still ticked off her liberal co-hosts for simply disagreeing with them. The liberal blowback to her questions to 2016 candidate Hillary Clinton may have even been the reason why she abruptly left the show.

Of course there is the likelihood that ABC is so intolerant of conservatives that they don’t even want to air their opinions. The New York Post’s Karol Markowicz mocked ABC’s supposed struggle to find a conservative “unicorn:”

“Oh, please. Just admit you want a show of liberals for liberals. It would be best for all of us if people could just be truthful,” she wrote on Twitter.

In the meantime, the show plans to bring back some of the right-leaning guest hosts who've already auditioned for the spot in the past few months, like former White House aide Alyssa Farah. It also plans to try out non-conservative co-hosts like former New York Times' editor Bari Weiss and former host Lisa Ling.