Did ABC's Sole Conservative Host on 'The View' Confirm She Left Over Clinton Interview?

On Monday’s show, The View’s only regular conservative host Jedediah Bila announced it was her last day on the show. Just two weeks into the new season, Bila emotionally told viewers that she was leaving the show, but didn’t give any reason as to the cause for her sudden departure.

It wasn’t long before the speculation started happening online. Gossip blog Page Six first suggested there was something more to the story than Bila was letting on. “Did Jedediah Bila exit ‘The View’ because of Hillary Clinton?” the headline read, for the article that was posted very shortly after she announced her departure. In the article, an unnamed source told the gossip blog that producers were upset with the nature of Bila’s questions to the notoriously closed off, former presidential candidate during her interview last Wednesday on The View.

There was a lot of staff who were upset about how that interview was handled,” says the source, speculating that The View wants the former secretary of state to appear on the show multiple times. “They had a lot to say to Jedediah about calming things down.

Secretary Clinton, I'm a conservative. I have read your book cover to cover, because I was really interested in your perspective and still am. One thing that bothered me, that if I’m being honest with you, I felt there was some tone deafness as to why, you said you were unsure as to why the race was so close to begin with. I was talking to people throughout the country. I have Trump supporters in my family, friends that were saying ‘We're frustrated with rising Obamacare costs, we’re frustrated with government overreach, we're frustrated that we had a president that couldn't utter radical Islamic extremism with the ease that we wanted him to. Some of those people were voting for Trump based on real issues. Do you acknowledge that? That that was happening?

Rumors that the Page Six article’s speculations were true, started just ten minutes after the article went live. CNN’s Oliver Darcy noted that Bila tweeted out a video clip of her confronting Clinton on the show last week, seemingly confirming that this was the reason she was possibly let go:

—@JedediahBila tweeted this 10 min after this @PageSix report: https://t.co/f2fnAUkBig https://t.co/i7vRHgmEeT

Unfortunately she deleted the tweet shortly afterwards, but Free Beacon captured a screenshot: 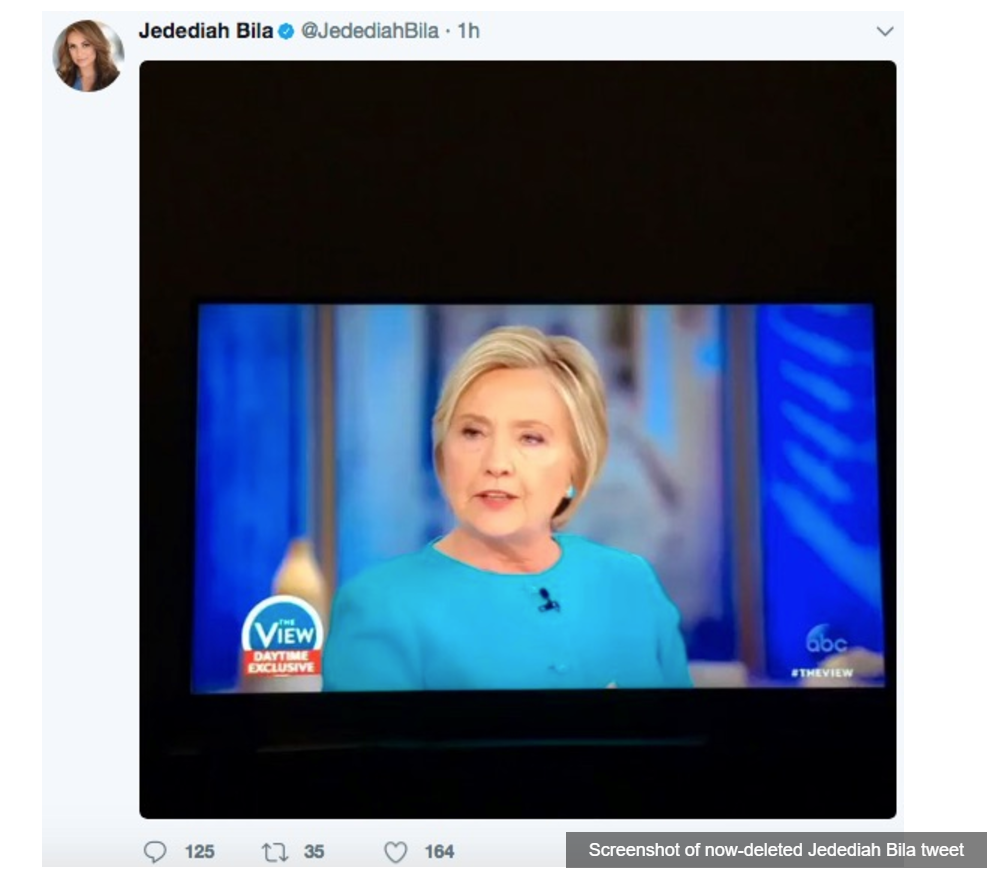 Additionally, Bila apparently tweeted out last Friday that she would be returning to hosting the following Monday, but deleted that tweet as well.

On Thursday, Bila shot back at someone on Twitter who said her tough question should have come first, saying that producers make decisions about the order of questions (let's guess especially when there's a guest as touchy as Hillary): 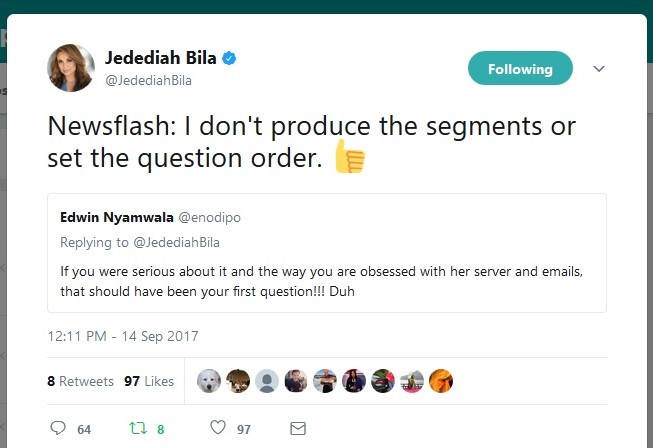 Whether or not these rumors are true, Bila’s departure from the show was sudden and strange. The show’s producers waited to let Bila make the announcement until over ten minutes into the show. Additionally, they started the show very joyfully, celebrating fellow host Sara Haines birthday, with pink decorations and candy all over the set, only to come back from commercial break to let Bila make the somber statement. Bila held her composure, giving thanks to her fellow hosts and their viewers, but she certainly seemed to be holding back some emotions.

You can watch her announcement from yesterday’s show below: