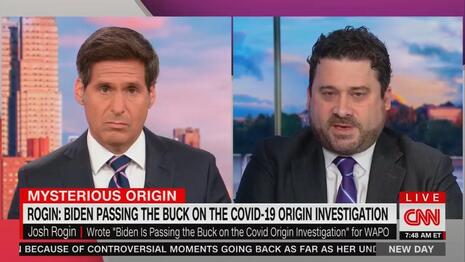 This morning, ABC, NBC and CBS refused to report how the Biden administration allegedly stopped an investigation into the origins of the coronavirus pandemic. The latest revelation came on the heels of many media outlets suddenly reversing course on the Wuhan lab leak theory, which they previously mocked as a conspiracy.

According to Kylie Atwood at CNN.com, “President Joe Biden's team shut down a closely-held State Department effort launched late in the Trump administration to prove the coronavirus originated in a Chinese lab over concerns about the quality of its work, according to three sources familiar with the decision.”

Atwood’s sources revealed that partisan politics seemed to play a big role in the Biden team choosing to shut down the investigation started by Mike Pompeo at the State Department, last December:

Those involved in the previously undisclosed inquiry, which was launched last fall by allies of then-Secretary of State Mike Pompeo, say it was an honest effort to probe what many initially dismissed: that China's biological weapons program could have had a greater role in the pandemic's origin in Wuhan, according to two additional sources.

But the inquiry quickly became mired in internal discord amid concerns that it was part of a broader politicized effort by the Trump administration to blame China and cherry-pick facts to prove a theory...

But none of the three networks reported on this alarming news, even though each one of them had reports on COVID-19 vaccines, the Manhattan District Attorney’s investigation into the Trump organization, and Rep. Marjorie Taylor Greene’s mask-Holocaust comments.

But as recently as March, the networks were interested in reporting on this topic. ABC and NBC's evening newscasts stood by China just a few months ago, trumpeting the compromised World Health Organization's report linking the outbreak to bats. So why no update now, as more information has come out?

Even some in the liberal media are holding the new administration accountable. Washington Post columnist and CNN analyst Josh Rogin criticized the Biden administration’s handling of this investigation in an op-ed Tuesday, as well as an on-air guest on CNN Wednesday morning, saying they had “passed the buck.”

During press briefings this week, White House Press Secretary Jen Psaki repeatedly dodged questions from reporters about what the administration was doing to investigate the lab leak theory. Rogin noted Psaki “ insisted the administration genuinely wants to get to the bottom of the origin question….but repeatedly refused to say what, if anything, the Biden administration is willing to do to figure it out.”

Rogin added that the Biden administration “thwarting congressional inquiries while passing the buck to the World Health Organization,” is “a recipe for delay and probable failure. This neglect further endangers our national security and public health.”