All you need to know about CNN's continuing campaign against President Trump was contained within a short statement by one of its political "analysts." On this morning's New Day, analyst Josh Rogin:

Rogin's ugliness came in the context of his response to Trump's critical comments about CNN's documentary Covid Wars, and in particular Trump's criticism of Drs. Fauci and Birx.

Rogin began by sneeringly saying that President Trump is:

"Free to put out whatever statements and whatever social media platforms haven’t banned him."

You know, there was actually a time, before woke cancel-culture warriors captured the media, when the press were leading advocates of free speech. Seems a long time ago.

Rogin then got truly vicious:

"His statement is depressing and appalling, but at least it won’t kill any more Americans just because he’s not president. And I think that’s the small comfort that I find in it." 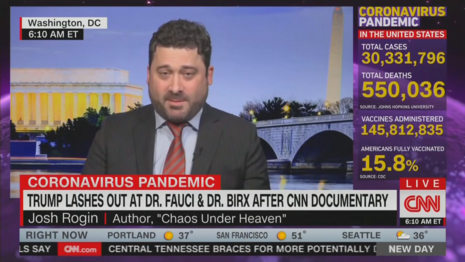 So, did the show hosts object to Rogin's vilification of Trump as a killer? Au contraire: at the very end of the clip, substitute host Jon Avlon can be heard chuckling at Rogin's killer remark.

Avlon summarized: "Dr. Birx said in the documentary that she felt the first 100,000 deaths might have been unavoidable, but basically 450,000 Americans have died because of bad policies from President Trump." Notice CNN isn't saying the 150,000-plus deaths since January 20 are somehow caused by President Biden. The smear only goes to one party.

A few weeks ago, Rogin was allowed to utter the words on CNN that the Biden administration wasn't disputing some of the Trump administration's claims about the coronavirus and how it may have come from a lab in Wuhan.

JON AVLON: Josh, before we get to the WHO report, I want to get your response to what ex-President Trump said in response to the CNN documentary, "Covid Wars," where he really, he issued a statement teeing off, the kind of statement that would have previously been a Twitter tantrum.

Here's what he said: "Two self-promoters trying to reinvent history to cover their bad instincts and faulty recommendations. Which I fortunately almost always overturned. I onl ykept dr. Fauci and Dr. Birx on because they worked for the US government for so long they are like a bad habit."

Josh, Dr. Birx said in the documentary that she felt the first 100,000 deaths might have been unavoidable, but basically 450,000 Americans have died because of bad policies from President Trump. Is President Trump in effect taking ownership in a backhanded way for his administration’s failure and those deaths by attacking the doctors and proudly saying he ignored their advice?

JOSH ROGIN: You know, I think there’s plenty of blame to go around, and a lot of things everybody wished they had done different, including Dr. Birx. But former President Trump’s level of concern for the real issue at hand, which is actually the pain and suffering of millions of Americans, is next to none. And that’s consistent throughout his presidency and remains.

And the fact that he’s focussing on his personal squabbles and not the actual suffering of Americans, which he exacerbated through his ignorance, negligence and lies, is appalling and depressing and only mitigated by the small comfort that he’s no longer president anymore.

ALISYN CAMEROTA: I mean, he is very upset about the CNN documentary. He obviously watched it closely, or his advisers told him about it. He was really — that statement was sort of going through point by point, Josh.

AVLON: And didn’t learn anything.

ROGIN: Yeah. No. I mean, he’s free to, like, put out whatever statements and whatever social media platforms haven’t banned him. Luckily he’s not making the policy anymore. So, you know, yeah. His statement is depressing and appalling. But at least it won’t kill any more Americans just because he’s not president. And I think, you know, like that’s the small comfort that I find in it.