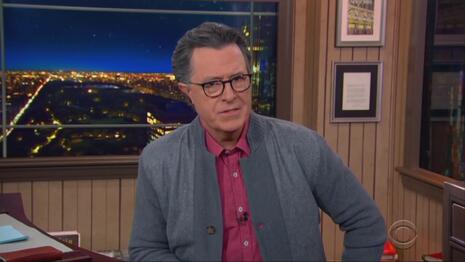 For the past 4+ years, late night comedy had become anything but funny, with comedians like Stephen Colbert and SNL alum Seth Meyers turning into rage-filled political commentators obsessed with President Trump. Their daily work helping the DNC didn’t stop with hating Trump; they actually became more obnoxious sycophants puffing up and protecting Democrat politicians, as well.

CNN and NPR both put out pieces this past week discussing what would happen to late night comedy now with Trump out of office. On CNN.com, media reporter Frank Pallotta discussed the topic with media analyst Bill Carter in “How Colbert, Kimmel and Fallon plan to adapt to life after Trump:”

Hosts such as Stephen Colbert, Seth Meyers and Jimmy Kimmel acted less like MCs of a nightclub full of celebrity guests and more like nightly news anchors offering viewers much-needed, if not always comical, insights into the administration's antics.

Carter praised Colbert for finding his voice as an anti-Trump critic, while he blamed Jimmy Fallon for struggling because of his "infamous hair mussing incident" with the former president.

But the most obnoxious part came at the end, worrying about how Saturday Night Live just couldn't lampoon Democrats like Obama or Biden because they were too boring and scandal-free. But at least that meant they could return to politics-free comedy!

James Andrew Miller, author of "Live From New York, the Complete, Uncensored History of Saturday Night Live," told CNN Business that the NBC variety show might soon find that making fun of Biden is a lot harder than making fun of Trump.

"Obama was probably one of the most difficult presidents for 'SNL' because he was difficult to impersonate and there wasn't a lot of drama going on in the White House," Miller said. "Biden promises to probably be the same, so that's a challenge."

"I think now in the Biden years there's an opportunity for 'SNL' to also spend more time on so much of what it's done in the past, which is great comedy, great sketches, reoccurring characters, and other things that have nothing to do with politics," he said. "They're emancipated from the burden of having to cover Trump all of the time."

NPR’s TV critic Eric Deggans also discussed the late night changes on the nationally-syndicated show, Here & Now. Like Carter, Eric Deggans predicted late night comedians would tone down the highly charged political rhetoric and “find a new direction” because Americans were “worn out by it.”

Host Peter O'Dowd agreed that with Trump in office, comedians “had to take on the more serious role of political commentator.”

NPR also took digs at Jimmy Fallon for trying to be the nice guy television host and not fully leaning into a lefty rage machine like Colbert. “He’s got to hope that the tenor of the times change a little bit otherwise he’s still going to feel like he’s not meeting the moment,” Deggans critiqued.

The short NPR segment ended with O'Dowd acknowledging that there had been no effort to reach out to Trump voters or conservatives from late-night comedians the past four years. He wondered if that had hurt them or if they could move on and broaden their audience reach now. Deggans wouldn’t even acknowledge the valid criticism and defended the harsh, one sided political rhetoric of modern comedy:

Well I think the bottom line is to be successful in late night you have to have a sense of reality of what you’re talking about. And I think it’s hard to do that and also reach out to a constituency that insists on believing things that are demonstrably untrue.

I think the bigger question is will late night audiences retain their appetite for very serious, grounded commentary? Or will they want something that’s a little more fun and a little less obsessed with the headlines?

The very idea that Biden will be under "serious" scrutiny now that he's president? Now that’s comedy.