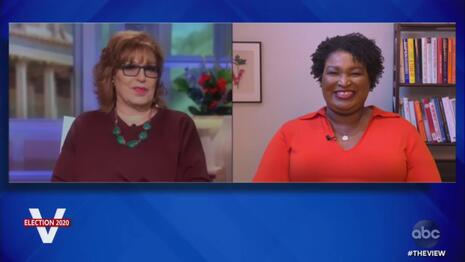 On The View Thursday, the co-hosts continued their habit of indulging the delusions of failed Georgia Democrat gubernatorial candidate Stacey Abrams. As the co-hosts strategized with her how they could flip more red states to blue, they encouraged her to try to get a position in Joe Biden’s administration.

Co-host Whoopi Goldberg opened the interview praising, "Nobody had Joe Biden's back more than Stacey Abrams. I mean, she -- she -- she has been working to make sure that the Democratic party is doing everything they can do in Georgia to turn it blue." She gushed, "I know all those politicians, those Republican politicians in Georgia wish now that they had just made you governor!'

That fawning continued as co-host Joy Behar beclowned herself comparing Abrams’ “close race” for governor in Georgia where she lost by 55,000 votes to Trump trailing Biden in the same state by 14,000 votes. (Abrams has still not conceded that she lost her 2018 election):

You know, Stacey, you're very familiar, we all know, with close elections in Georgia. And your own gubernatorial race in 2018 came down to just 55,000 votes, and right now Biden leads by just over 14,000 votes, but the Secretary of State just announced that they're going to recount all of the ballots by hand, by hand mind you just like the Trump campaign requested. Aren't they accommodating? Georgia has never had to do a recount like this before. Are you confident Biden's lead will hold up, and how long is this going to take exactly?

Yet Abrams insisted Biden’s lead in this race’s much closer margins were “insurmountable:” “We don't know how long it's going to take, but we are absolutely certain that this lead is insurmountable. It is absolute and Joe Biden won Georgia,” she touted.

Last April the hosts told Abrams it would be “offensive” if Biden didn’t pick her for his Vice President. Since that didn’t happen, Behar begged the Democrat to let them know what White House position she was jockeying for now:

You know, I'm so glad that you've finally got -- you got all the accolades you did for the all the work you did this year. You deserve it, but let me ask you this question because we've always said how much we've appreciated your candor about wanting to be Biden's Vice President. You came -- I believe it was on this show, you said it too. So in the spirit of that candor, which White House position are you interested in now, Stacey?

Abrams insisted she was only concerned with helping Democrats win their Senate runoff races in Georgia. But Behar kept trying.

“Okay, fine, but have you spoken to the Biden team about a possible role in the new administration? Come on. Come on!” she urged. Abrams wouldn’t reveal her cards, circling back to the Georgia runoff elections.

But the hosts kept flattering the Democrat by strategizing with her how Dems could flip more red states. Sunny Hostin hoped Georgia would be a "blueprint" for Democrats winning in other "reliably red states.

Just a reminder, last February, Abrams told The View that for Democrats to win elections they need to "jerry rig the system and go around the Constitution." So that is the kind of power hungry, Constitution-flouting Democrats they want running the country.

Charmin sponsors The View, you can contact them at the Conservatives Fight Back page.