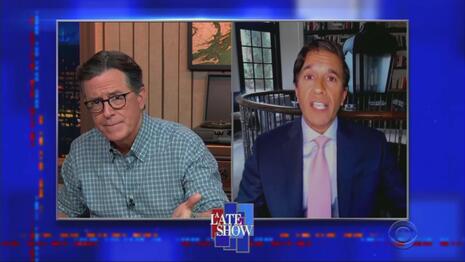 CNN’s chief medical correspondent Dr. Sanjay Gupta appeared on The Late Show Tuesday to trash the Trump administration’s handling of the coronavirus pandemic, with less than a week until the election. Gupta even agreed with Stephen Colbert that the president’s “plan” was to let millions of Americans die from the virus.

You just heard the projections, 150,000, 200,000 more people may die within the next few months. So we're nowhere near that. The things that's frustrating, I think, Stephen is that there's been the sense that we surrender, you know, this whole waving the white flag, and I think it's-- it's even worse than that in the sense we didn't even just surrender. We kind of opened the door for the virus and said, 'Come on in.’ It was this herd immunity idea. Just let people get infected.

Colbert then claimed this seems to have been the President’s plan from the beginning...to let millions of Americans die, which Gupta agreed with:

COLBERT: And that seems to have really been the plan from the beginning. You know, as much as Fauci came out and said he advised the president very early on when the president said 'just let it wash over the country, what happens if we do that?' Fauci said 'you'd have millions of dead people. That's why you can't do that.' But it seems that that really is the plan.

GUPTA:  I mean, it's certainly what the policies have led to in this country...

Gupta also confirmed Colbert's assumption that the United States was handling the virus worse than any other country in the world. Gupta touted the “fascinating” study out of Columbia University that claimed the U.S. could’ve had the same low death rate as South Korea’s if we enacted the same measures they did, which is a preposterous hypothetical. Does South Korea share the same obesity rate and co-morbidities as the United States does? Gupta also ignored how Europe has surged past the U.S. in COVID cases this week. That’s not a reality that CNN will own up to because it contradicts their narrative this is all Trump’s fault.

But Gupta displays his liberal partisanship on the network regularly, spreading conspiracy theories and debunked stories while propping up Democrat governors and covering up their mistakes in handling the pandemic.

Comcast sponsored this misleading anti-Trump segment on The Late Show. You can contact them at the Conservatives Fight Back page here.