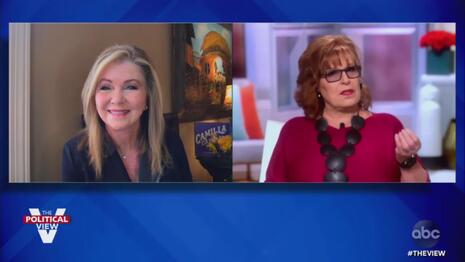 Senator Marsha Blackburn (R-TN) appeared on The View Thursday to tout her new book and discuss the vice-presidential debate last night. While there, she debunked the liberal talking points from the hostile hosts on the economy and coronavirus, leaving them fumbling, fuming and even resorting to childish name-calling.

They opened by discussing last night’s debate. Blackburn pointed out that Harris had touted the recession recovery effort under President Obama and Joe Biden even though it was one of the slowest recoveries in American history. But Joy Behar couldn’t handle the truth. She huffed,” What?” in outrage and tried to shut her down, before spewing a series of falsehoods which Blackburn had to correct:

MARSHA BLACKBURN: I thought it was interesting last night that Senator Harris said that Joe Biden ran the Obama recovery, and we know that that was one of the slowest recoveries ever from a recession. 2% --

BEHAR:  Excuse me, ma'am. Excuse me, Senator. I have to interrupt you. It's only an hour show, but I have to interrupt you, Ma'am because the way I saw it, President Obama left this country with a surplus and now we're in a huge deficit, not to mention the thousands who are unemployed right now and who don't even have food. Over 1 million children are going hungry in this country. I don't see there's anything to brag about. But let me ask you this question. Trump is back in the Oval Office even though he's likely --

BLACKBURN:  I have to jump in here. We weren't left with a surplus. There was not a surplus. Excuse me. During -- when President Bush --

BEHAR: It wasn't a deficit!

BLACKBURN: --Left office our national debt was at $10 trillion, and when Obama left office, it was over $22 trillion. Now that's way too much. $10 trillion was too much debt for me, but the thing is, no. We did not have a surplus. We have a growing federal debt--

After this meltdown, which obviously completely ignored the shutdowns’ devastating effect on the economy, Behar went on to scold Blackburn about Trump infecting people with coronavirus in the White House.

Shortly later, it was Sunny Hostin’s turn to aggressively question the senator. After Behar’s histrionics accusing her of not caring about starving children, Hostin resorted to calling Blackburn “xenophobic” for saying facts about where the virus originated from (click "expand"):

SUNNY HOSTIN: Can I ask you this? When the President did return to the White House earlier this week, you tweeted, ‘President Trump has once again defeated China.’ Now aside from the blatant xenophobia in that tweet, and I don't think that you meant to offend all of the Asian-Americans and Asians that you did offend by that tweet. More than 211,000 American lives have been lost to this virus, and counting. Trump's own White House has become as Joy mentioned, a hotbed of infection. What did you mean by defeating anything? What have we defeated exactly?

BLACKBURN: I think this is Sunny asking the question. I want to be sure.

BLACKBURN: --Because I can't see the screen. Okay. Thank you, Sunny. One of the things we do know is that this virus came from China, and that is something that we recognize. This is where the virus came from. As I said earlier, the President is following the advice of his medical and health care professionals which is what we want him to do, and we know that the virus is serious. We need everybody working together in order to defeat this. We also know that it is surprising to many of us that there is still so much partisan bickering when you look at what has happened with this virus, with suicides being up. When I'm talking to my county mayors in Tennessee, they talk about alcohol and drug abuse, child abuse, domestic abuse --

BLACKBURN: We know that.

WHOOPI: Okay. So we're getting ready --

BLACKBURN: We know the Chinese had 53 days they had this pandemic on their hands. We know that they delayed giving us the viral asset.

WHOOPI: Okay, Ma'am. We're going to hold off a second because we're going to take a break, but before we go, I do want to remind you that when you-know-who found out that it was a virus that traveled through the air, he didn't tell anybody. So whatever Wuhan didn't do is exacerbated by the man who is running the country. [commercial break]

After returning from commercial, the hosts were actually more civil. The View's meltdowns are paid for by advertisers CarShield and Colgate, whom you can contact by following links provided.