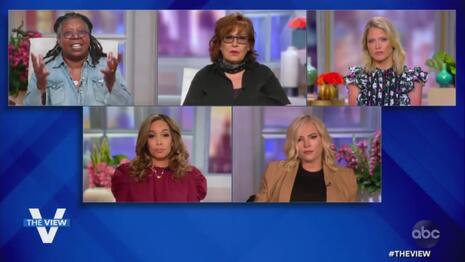 The View returned Tuesday for its 24th season and predictably, they had a lot to blame President Trump for. The hosts kicked off the show talking about whether or not the president’s “law and order” message would help him win in November.

Co-host Sunny Hostin ranted the violence on the streets was caused by Trump supporters because he was “encouraging” violence. Clinging to the Kenosha shooting, she ignored the fact that Black Lives Matter has started at least 570 violent riots in 220 cities across the country. There have been multiple people assaulted, killed, raped, their property stolen or burned down, not to mention the hundreds of officers injured. And yet Hostin didn’t condemn any of that:

HOSTIN: We know that Trump is encouraging violence in America to just distract from his failures, right? Namely his failure in managing this horrible global pandemic that caused the death of 200,000 Americans on his watch. Let us not forget Whoopi that it was a Trump supporter who killed two people in Kenosha. It was Trump supporters who carried guns to state capitols during the coronavirus shutdown. I think very well that suburban moms know if they want their sons to be safe from violent militias and their parents to be safe from the coronavirus, and they want schools to be opened safely, they got to get rid of Trump.

The polls are really showing that. There's a Fox News poll actually that in Wisconsin by 5 percentage points those very same people in Wisconsin believe Biden is safer for America. CNN poll, same thing, 5 percentage points, Biden is safer for America. So those suburban moms that Trump is really trying to play for in those swing states, they know Trump is the more dangerous candidate in America for their children, for their parents, for everyone.

But co-host Whoopi Goldberg grossly suggested the right was “celebrating” the Antifa “kids” (36 and 26 years old) Rittenhouse shot, in what appeared to be self defense:

WHOOPI: Yeah. I have kind of feel like it's really important for people to recognize that when people celebrate the murdering of citizens, American citizens, whether you agree with them or not, when it's celebrated and people say, you know, ‘it's really good, who knows what could have happened to him if the looters and protesters had caught him?’ This boy shot somebody. Ran away. The people chasing him were chasing him to get the gun, knock it out. The kid went to hit him with the skateboard to get the gun out of his hands and he shot him. I want to know, are we going to talk about those kids?

She added one more bit of sympathy mourning the men shot, both of whom had criminal records: “Is there going to be a funeral for those people? Those were American citizens killed,” she said.

Notice neither host mentions the Trump supporter gunned down in an ambush by an Antifa anarchist in Portland a few weekends ago.

Later, Hostin repeatedly talked over guest Sarah Huckabee Sanders as she spoke about Joe Biden ignoring the violent riots until recently. She asked Sanders three times, why Trump didn’t show his support for Jacob Blake, a man accused of sexual assault, and his anti-Semitic father:

--- He [Biden] did speak to Jacob Blake though!

No surprise @TheView tried to cut me off when I started exposing the pattern of unchecked mob violence in Democrat-run cities...

Read the truth about our fight against the liberal mob in my new book, available NOW at https://t.co/NpuyebjBHb pic.twitter.com/8LOAha4h1F

The hosts became angry as Sanders schooled them on all the things Trump has done for black Americans. “Oh my God!” Whoopi said in frustration as she and Joy Behar tried to shut her down. "Sarah, it's only an hour show!" Behar snapped.

Towards the end of the interview, Whoopi again tried to create sympathy for Antifa anarchists. Whoopi falsely claimed they were shot by Rittenhouse simply because they were “protesting” and liberal:

“Would you disagree with how some people have characterized young Kyle Rittenhouse? Do you think it was a good idea for him to shoot down and murder two people because he disagreed with their politics? That's not good, right?” she sneered.

The hosts also spent a significant amount of time piling on Sanders for disagreeing that Trump hates and disrespects the military. Referencing the Atlantic piece out last week, Behar falsely claimed that no first hand accounts had disputed the story: “As far as the sources are concerned, we have not heard any denials from any people who were in any of these places. If they didn't hear that, if it didn't happen, why don't they open their mouths? Are they scared of the reprisals from the White House?”she asked.

Actually, several named witnesses have shot down the story told in the Atlantic as false.

God help anyone who gets their news from the ill-informed, partisan hosts of The View.

Olay and Febreze paid for this drivel, contact these advertisers by following the links above.