NBC Demands Dr. Birx Quit to Save Her ‘Credibility’ From ‘Trump Vortex’ 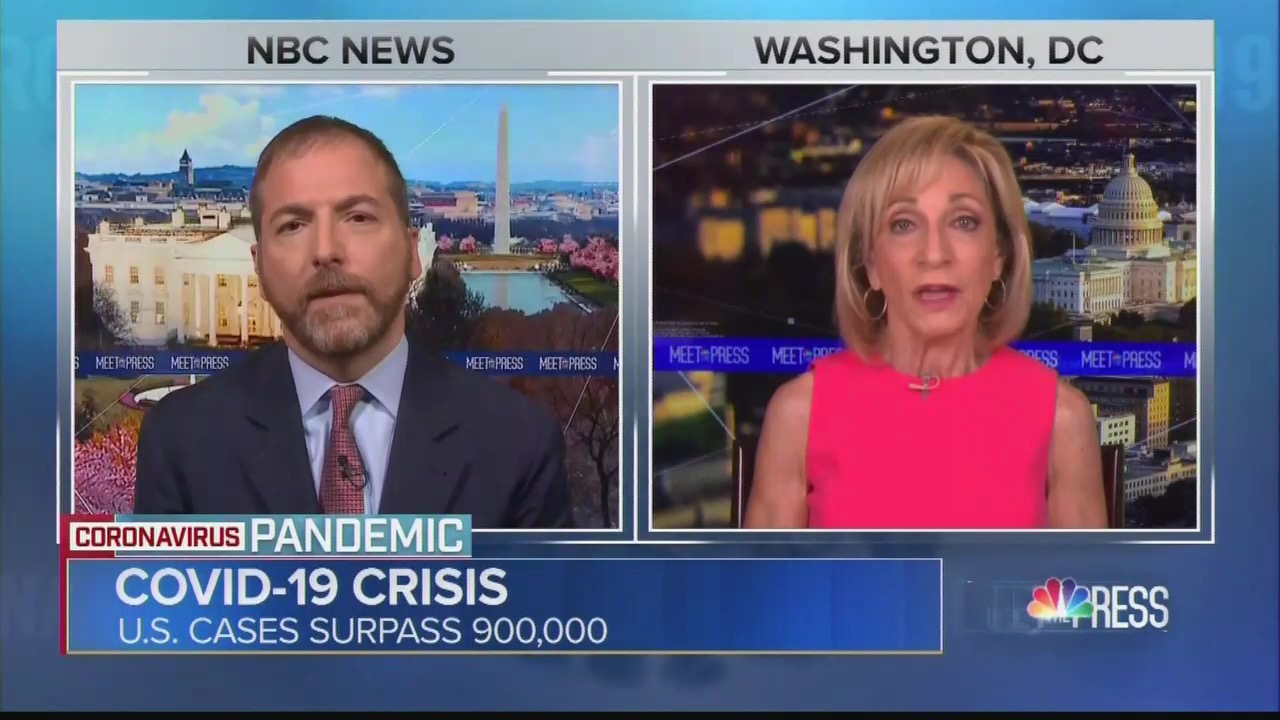 On Sunday’s Meet the Press, host Chuck Todd repeatedly attacked the “credibility” of coronavirus task force doctor, Deborah Birx, as she has refused to comply with the media’s demands she politicize the virus. MSNBC anchor Andrea Mitchell went even further, suggesting Birx quit now to save her reputation.

Early in the show, Todd interviewed the physician and global health official, bluntly asking her if she was concerned about her credibility being ruined because she worked for Trump:

At the top of the next hour, Todd showed how completely out of touch he was with the average American suffering during this crisis, proudly declaring, “If there's a good thing about this economic crisis, it's been the clean air and views we haven't seen for a long time!” From there, he brought on his panel consisting of MSNBC hosts Andrea Mitchell and Stephanie Ruhle, along with NBC medical correspondent, Dr. Vin Gupta, to continue trashing the administration’s response to the coronavirus.

Todd complained to his panel how it was President Trump versus everyone else in fighting this virus, prompting Mitchell to respond.

The MSNBC host and NBC chief foreign affairs correspondent sneered that the briefings were Trump’s need to “self-congratulate” himself, then repeated the media’s tireless claim that het was doling out dangerous “medical advice” when asking his task force team a clumsily worded question about disinfectant, during Thursday’s briefing.

MITCHELL: He's finally backing off-- I'll believe it when I see it after this weekend-- as to whether he resumes because he so needs to fill his own demand, his need for self-congratulation, really, and to show what he believes is leadership, that we have seen dangerous, toxic advice coming from the White House, and unfortunately, I think the credibility of the scientists really now is on the line. They have to decide whether to stay inside and be valuable or whether or not they have to see another alternative, like Jim Mattis, and quit, because when Dr. Birx said to you today that sunlight does kill the virus, she is perpetuating an unscientific, untested, single study presented by a nonscientist from the department of homeland security, which led to the president, as she put it, not fully digesting the data. She needed to be very clear on disavowing it, and to this point, she still has not been even this morning.

Immediately after this, Todd invited NBC’s medical correspondent, pulmonologist Dr. Vin Gupta, to trash his fellow physician for not attacking the president:

"Dr. Gupta, are you worried that Dr. Birx is letting her credibility get sort of sucked into this Trump vortex?" Todd asked.

But her credibility would be indisputable if she quit and was hired by MSNBC to solely bash the president, right?

It wasn’t just NBC eager to see Birx ruined for not following the media’s narrative. CNN reporters Maeve Reston and Stephen Collinson gave a nearly identical mandate to Birx in an article posted to the network’s website, Monday:

Dr. Deborah Birx's balancing act between science and President Donald Trump's disinformation may be reaching the point of no return.

The coronavirus task force official has been caught in an unenviable spot, juggling her public health mission and reputation with the need to stay in the good graces of Trump, who has shown both a penchant for touting unproven therapies and a willingness to show his critics the exit.