‘View’ Hosts Moved to Tears by Biden's 'Character': He’ll 'Restore the Soul’ of the Country! 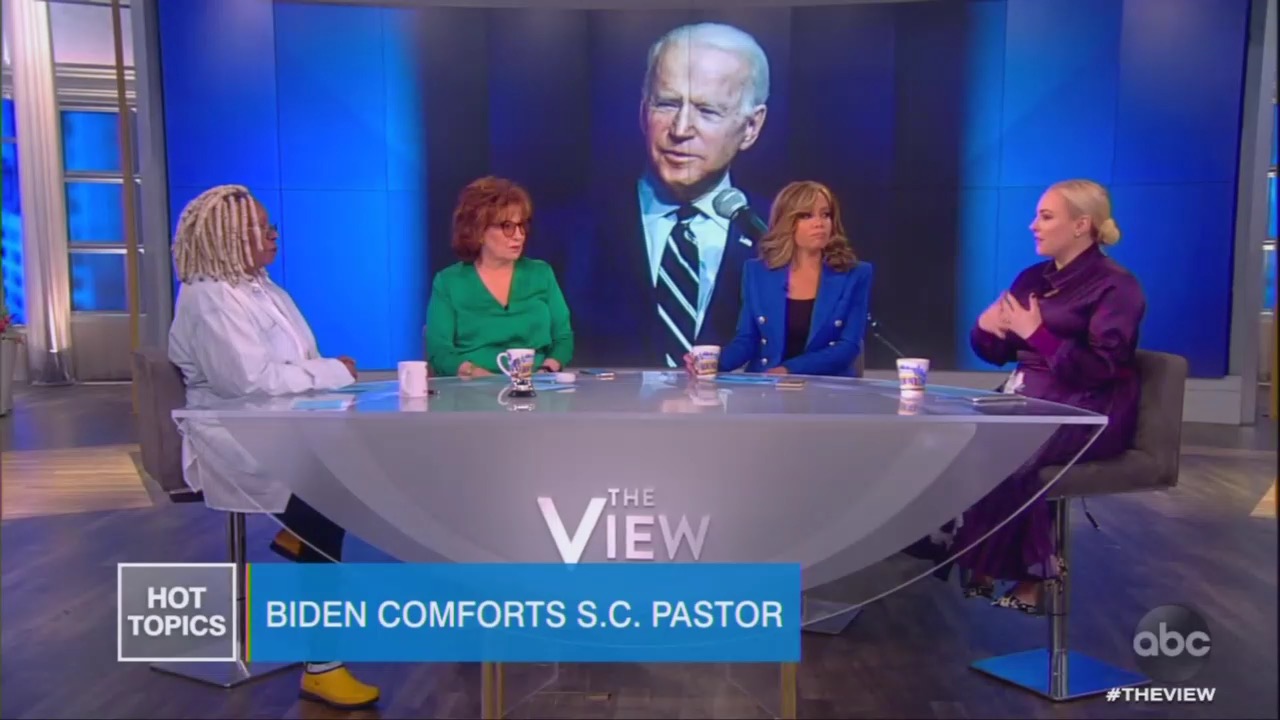 The View continued showcasing its embarrassing devotion to presidential candidate, Joe Biden, on Thursday’s show. Each host rewarded Biden with rave reviews over his performance during last night’s CNN town hall, claiming that his “empathy” would restore the “soul” of America. The liberal hosts also encouraged evangelical voters to flock to Biden, versus Trump, who was the “antithesis” to Christianity.

After playing a clip where Biden bonds with a man who lost his wife in the 2015 Charleston church shooting, the hosts were awestruck at Biden’s “beautiful” response. Meghan McCain admitted she was touched by his “empathy”:

“I saw this last night and I started crying and it's pretty long. Like we just cut it but this is Joe Biden at peak Biden. He has this way of empathizing with pain and people," she began.

McCain continued praising Biden as the “statesman” the country was “looking for.” Somehow that prompted Behar to go into attack mode against Christians supporting President Trump:

Hostin picked up where Behar left off, complaining she thought it was so “bizarre” for Christians to support craven Trump:

This led to an interesting detour where McCain tried to to explain to her confused co-hosts why conservatives support Trump:

He says, they hate you, meaning the media and liberal people that judge like, you know, redneck evangelicals in the middle of the country that people think are stupid and ignorant or whatever, he says I'm just in the way. Meaning they'll come from you, your religion and everything you believe but I'm in the way....He's in the way of leftists that want to change our life. Not that they necessarily believe that he's the greatest guy and like this religious figure or anything like that, it's that they think he's the person that is stopping the culture war from reaching them.

Meanwhile, Hostin said Biden would fight for the “soul of the country," because "he has that empathy." McCain added that Biden had the "character" that was "missing" right now:

“You also want someone who is going -- you feel like empathizes with the American public and can lead you through a crisis and I do think even in that moment last night Joe Biden, you see this character that is missing in our culture,” she gushed.

Behar got one more dig in at the Trump administration as they cut to commercial, calling them “sycophant lap dogs."

Ironic that Behar calls Republicans “sycophants” yet each and every one of the co-hosts talk about Biden here as if he’s the next Democrat savior.