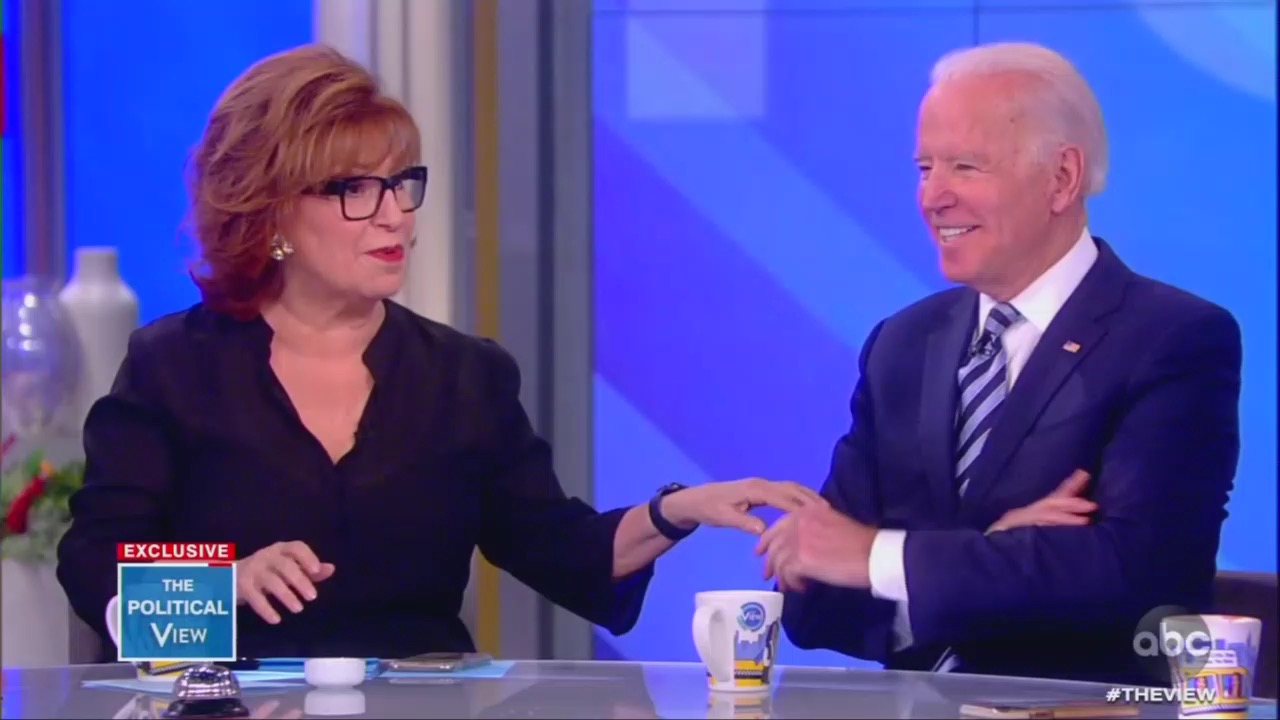 Joe and Jill Biden appeared on The View Thursday, where they were treated to 100% gooey, softball questions in a show that looked more like a campaign rally than a media interview. While other 2020 candidates have gotten a mixture of questions from the hosts, it was clear that they weren’t willing or allowed to ask tough questions of the 2020 presidential candidate.

In fact, the hosts spent more time inviting Biden to bash President Trump than they did asking him questions about himself or his policies.

The gag-worthy interview, punctuated by boisterous applause, giggles and hand-grabbing, began with the hosts downplaying Biden’s poor performance in Iowa and New Hampshire. Co-host Sunny Hostin asked, “Tuesday you placed fifth in New Hampshire. I don't know that that matters, but do you still believe you are the person who can beat Trump?” Joy Behar followed that up by worrying that Biden’s fundraising wasn’t up to snuff:

“Unfortunately money is a big part of running for president. I think it's crazy. I think it's wrong, but it is. You're having trouble with that. Your fundraising numbers are not strong,” she fretted.

After that, the hosts invited Biden to attack Mike Bloomberg over stop and frisk and Bernie Sanders for being too extreme of a candidate, before moving on to attacks against Trump:

SUNNY HOSTIN: Susan Collins said he's learned a lesson. Do you really think he did?

...Let's say you're on the debate stage with him and he does what he did to Hillary, starts hovering behind you like a big monster behind the poor woman. What are you going to do?

...When you were here last time I said they're going to get vicious. They're nasty people over there. He's beyond belief, this guy. I know him from the old days in New York City. Is it as bad as I said it was going to be or worse?

Biden went on defend himself as someone who has never “lied” or been accused of anything “indecent.” After that Hostin gushed, “You are authentic!”

As they cut to commercial, Whoopi Goldberg could be heard on a hot mic saying, "Stacey Abrams, Vice President?"

The hosts moved on to a series of sympathetic questions about Biden’s sons:

JOY BEHAR: People wanted to see you really get mad when people started lying about Hunter and saying things about Hunter. I don't know that you got mad enough.

SUNNY HOSTIN: As a mother, how hurtful have these attacks been on Hunter for you?

MEGHAN MCCAIN: Do you feel Beau on the campaign trail?

HOSTIN: Has he [Hunter] been able to weather this?

SUNNY HOSTIN: We talked earlier about the Department of Justice keeping up this investigation into Hunter and Lindsey Graham who was a friend of yours. He strongly supports that investigation is what we're hearing. What do you have to say to him about that?