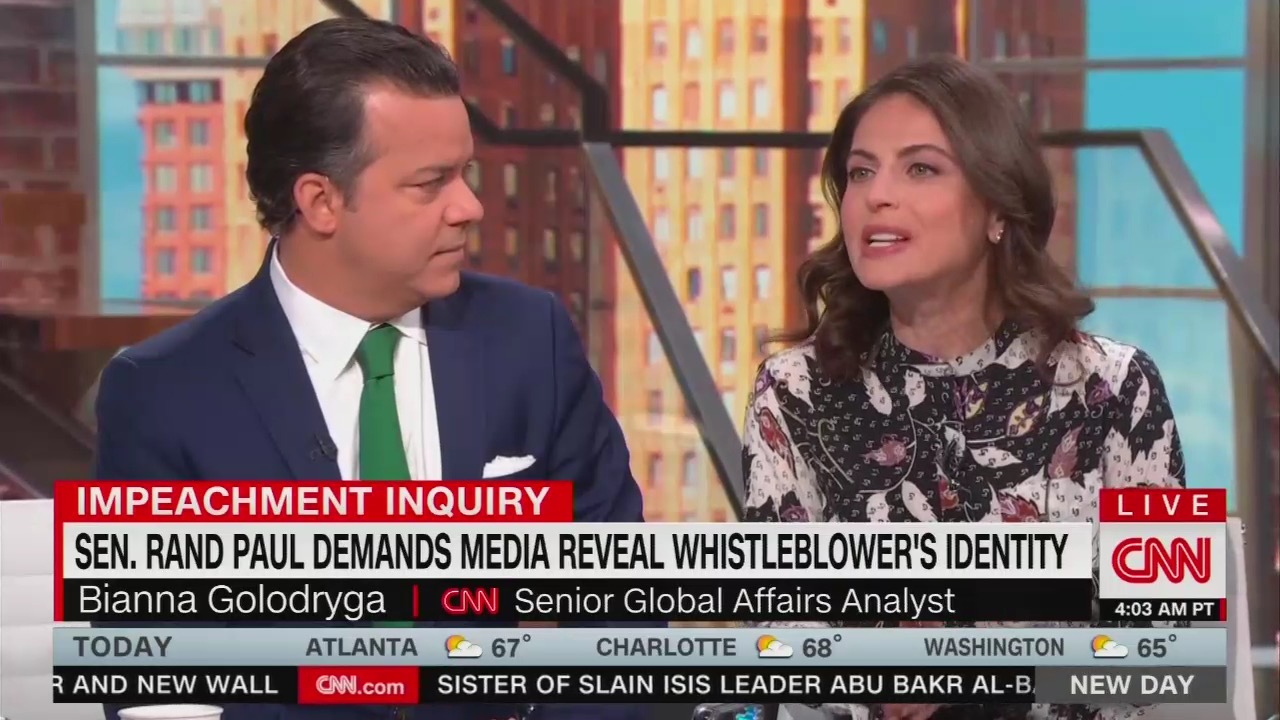 After it was revealed last month that the anonymous “whistleblower” worked for 2020 candidate Joe Biden when he was vice president, ABC squashed the important story calling it a “smear campaign” put out by President Trump. This morning, the media continued trying to protect the whistleblower’s partisan identity, by attacking Republican calls for transparency. On CNN Tuesday, a panel trashed Sen. Rand Paul’s “deeply deceptive and underhanded” demand that the media do their job and publicly identify the whistleblower who’s complaint launched this whole impeachment inquiry.

CNN New Day co-host John Berman began the segment by playing Paul’s call last night at a Trump rally in Kentucky, for the whistleblower to come forward and for the media to “print his name.” Berman sneered at Paul's call for transparency:

“There's something deeply deceptive and underhanded about what he's doing there, Jeffrey because he's saying someone else should do this because he knows if he said it out loud, that'd be breaking the law,” he argued. CNN’s senior legal analyst Jeffrey Toobin charged Paul with already breaking the law just by saying that, while co-host Alisyn Camerota called it “bullying.”

"It's bullying. It's dangerous. It's designed to discourage whistle-blowers from coming forward, while whistle-blower laws are supposed to do the opposite. But they are playing by their own rules and they're not paying a consequence for it."

Senior global affairs analyst Bianna Golodryga insisted that there was nothing to see here and everyone should just forget who the whistleblower is because other people allegedly corroborated his story:

“There's no reason to hear from the whistle-blower at this point because everything that he's been saying, everything that he has said has been validated by all of the other witnesses!” she claimed, adding that this was a clear attempt to attack and retaliate against his “bravery.”

All of this of course, is nonsense. CNN has no problem revealing people’s identities when it serves their political purpose.

CNN threatened to doxx a rando mememaker and accosted a random granny at her home for posting a meme on Facebook, but it and other networks refuse to identify the anti-Trump leaker who helped launch yet another round of impeachment boogaloo. That’s not journalism. It’s activism.

On top of that, those people CNN “doxxed” were not government officials caught up in an impeachment inquiry. This whistleblower’s identity is relevant because of reports he worked closely with Biden during his Ukraine dealings as vice president, and he also met with Adam Schiff prior to lodging his complaint, all details which most of the media have tried to hide because it calls into question the whole legitimacy of this impeachment inquiry.