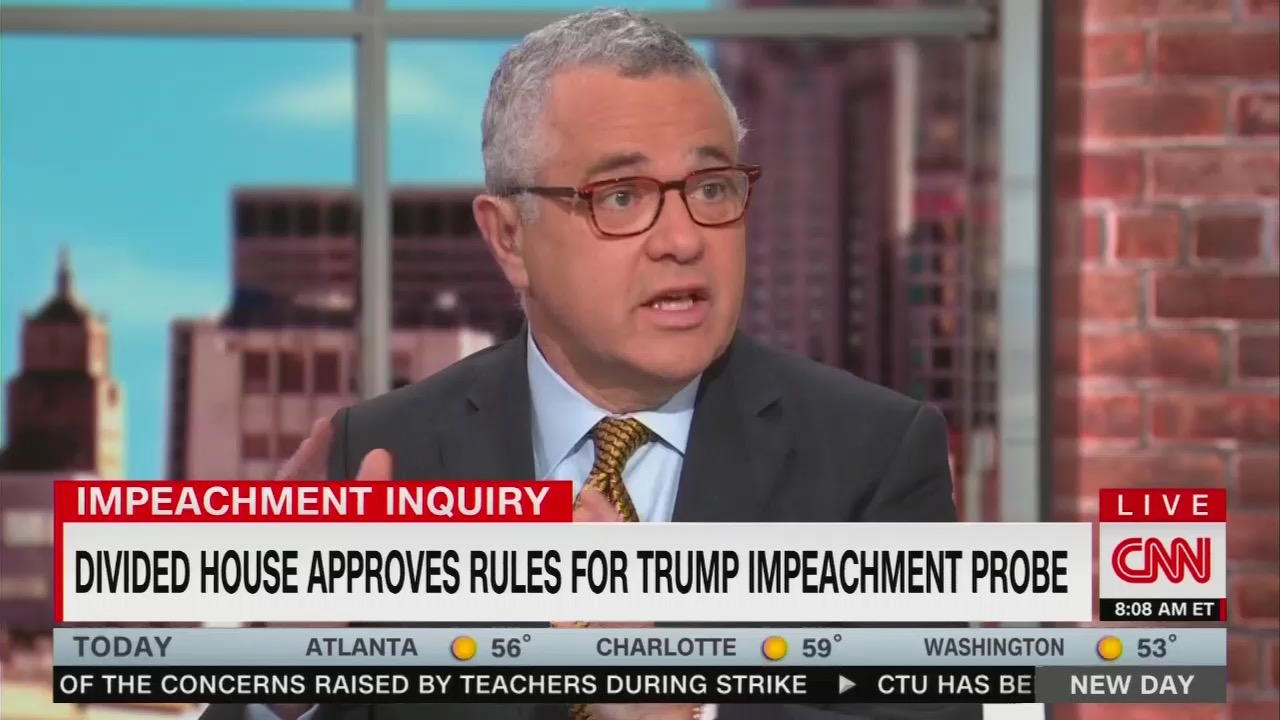 On CNN’s New Day Friday, co-hosts Alisyn Camerota and John Avlon brought on former Clinton White House Press Secretary Joe Lockhart to praise how his former boss behaved during his impeachment process, as compared to President Trump. The liberal journalists also griped that Republicans were too partisan to get on board with impeachment, something that could’ve been said about the liberal media in the ‘90s.

The panel first lamented the lack of “moderate” Republicans to impeach Trump. CNN Chief Legal Analyst Jeffery Toobin acted as if this was only a problem with the right: “Isn't this really part of the story of the evolution of the Republican party?” he sneered. Camerota agreed that “times have changed” and “We're in a particularly hyperpartisan moment.”

But in the ‘90s, the media wasn’t complaining that everyone wouldn’t get on board with impeaching the President. No, in fact they were the staunchest critics of the impeachment process. So maybe it’s not the Republican party that’s become too partisan, but the media’s own “hyper partisan” allegiances to Democrats, is even more apparent, to everyone but themselves.

They moved on to compare the strategies between Bill Clinton’s team and Donald Trump’s team, during their respective impeachment inquiries. Who better to comment in a completely unbiased way on this subject, than Clinton’s former press secretary?

“On the war room question, I think it's so different than 1998. The strategy that President Clinton employed was to stay out of it. Was to get off the impeachment field and to tell the American people every single day, ‘I'm focused on you, not on me,” Joe Lockhart, who is also a CNN political commentator, bragged.

“But Trump's strategy is to focus on himself. Everything he does is about how he's a victim, how he's being taken advantage of,” he sneered.

Toobin picked up that comparison, praising Clinton for “going back to work for the American people” during his impeachment, which he claimed, Trump has not:

There were like two White Houses. There was the impeachment White House with Paul Begala and Lanny Davis and that's all they did. And everyone else had absolutely nothing to do with it. And Bill Clinton from the day the story broke, he said ‘I'm going to go back to work for the American people.’ He never talked about it, and that was -- but Donald Trump is incapable of doing that. That's not how he operates.

Camerota pointed out this was a difference in strategy, and it appeared to be working for President Trump:

“No of course. Obviously they’re taking totally different tactics. But I would just say, In terms of battleground state polls, it's working for him. Battlestate ground Polls show that voters there, respondents don't want the president impeached,” she argued.

“By small margins,” Toobin scoffed, again assuming that most Americans were as liberal as CNN journalists.