End of Discussion: MSNBC Declares CA Wildfires Caused by Climate Change, Nothing Else 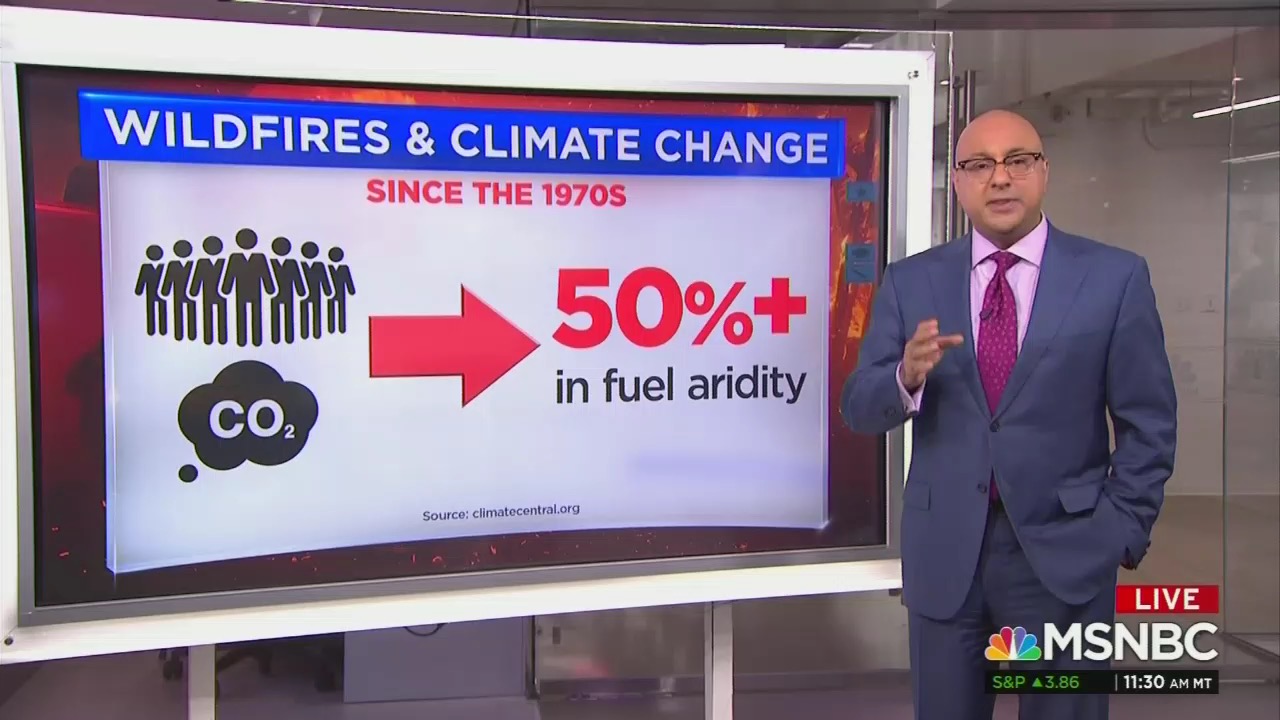 As wildfires ravage California again, after last year’s deadliest wildfire season on record, the media wants you to remember: This is climate change’s fault. MSNBC anchor Ali Velshi explained this to his liberal audience on Tuesday’s MSNBC Live With Velshi and Ruhle, by touting data from a climate alarmist organization, and not offering any other viewpoints into his explainer segment.

Co-host Stephanie Ruhle began by gushing over the sheer number of wildfires the state has been facing lately, plus the extended burning season. With that prompt, Velshi responded, “It does make you wonder, right?” adding, “Why are these fires getting worse and worse every year?” Of course, he had the reason ready: climate change.

“Take a look no further than the climate crisis. According to ClimateCentral.org., human-caused climate change is responsible for more than 50% of the increase, most notably in California” Velshi touted. He went on to blame rising sea levels causing a drier climate, which made trees more flammable along with higher temperatures. "If there isn't a significant reduction in those [greenhouse] emissions, patterns of extreme heat in dry regions are only going to get worse which of course will cause more and more wildfires," he subtly pointed to climate change policy proposals as the solution.

You can see his more detailed explanation in the video below:

Of course missing from Velshi’s answer is any other reasons beyond climate change.

The Federalist has an excellent article explaining how the state’s forests have been mismanaged from both California’s leadership, and the U.S. Forest Service, by failing to do prescribed burns because they are under the control of environmentalists:

For decades, environmental protection schemes have usurped common sense. For example, most fire ecologists say that the surest way of preventing massive forest fires is to use prescribed burns… Prescribed burns keep forests healthy by burning up the underbrush that accumulates on the forest floor and by thinning trees. Yet for decades the Forest Service has suppressed most fires.

The situation has become so bad that gas company PG&E has even resorted to turning off customers’ power as a preventive measure.

Unsurprisingly, the media’s only solution to this problem is to echo California Democratic leadership deflecting blame by claiming this is a result of climate change. The solution? Enact more environmental protections. It seems blaming “man-made climate change” for the mess California is in, is easier than examining the destructive policies that are certainly partly to blame for letting the state burn.