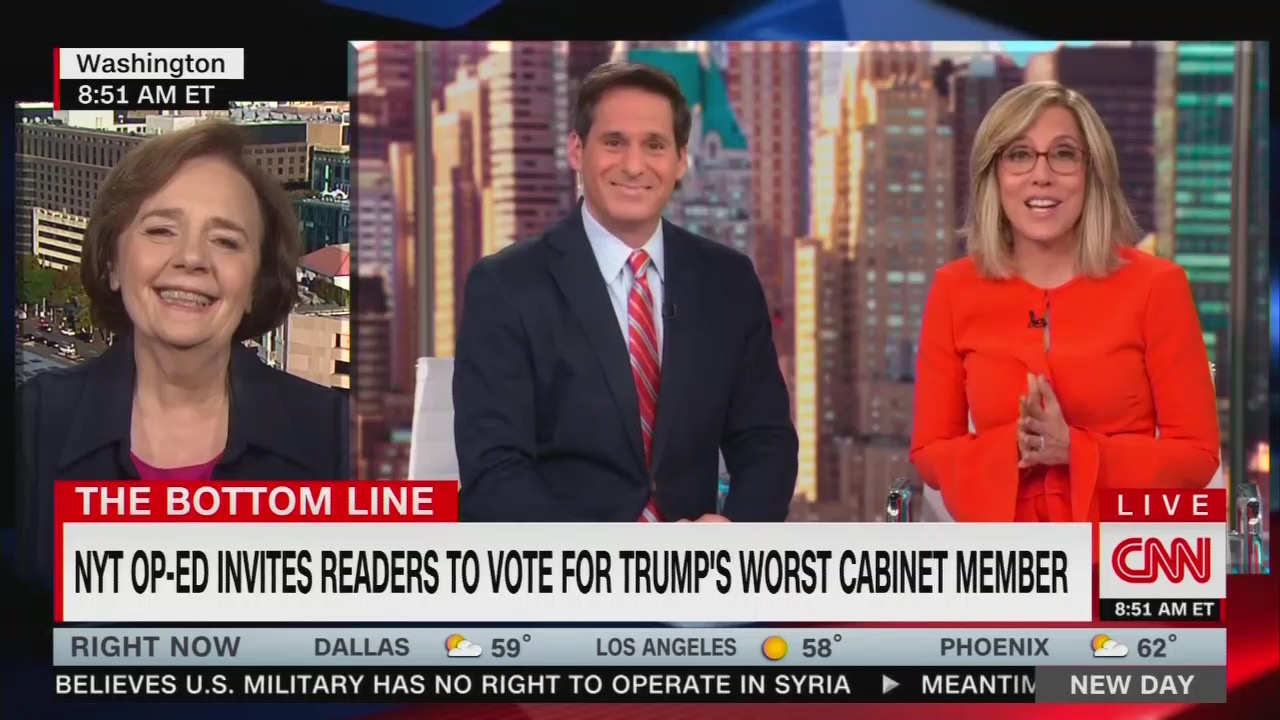 CNN New Day hosts Alisyn Camerota and John Berman got a kick out of New York Times columnist Gail Collins inviting NYT readers to “vote” again for the “worst” Trump cabinet member, on Monday's show. While the CNN hosts gushed over the “reality tv show” “contest” that bashed the administration, Collins marveled at how much liberal readers hated the Republican cabinet.

Co-host Alisyn Camerota lavished praise for the sleazy Times’ “reality show” which attacked cabinet members and invited its readers to “eliminate” them from “the island:”

Gail, your column, you laid out all of the cabinet members and then you said what you felt were some of their shortcomings and I mean, it struck me as sort of a very kind of Trump-esque reality show that you're suggesting of getting readers to write in and, you know, give you their vote of who they think should be eliminated from the island.

Even though her paper, and the rest of her media peers, have attacked these conservative political figures daily since Trump came into office, Collins pretended she was surprised by how much her liberal readers hated these people:

It is very strange. I find it astonishing that people care so much about the cabinet members and that they know who they are and they write with great passion about this one is -- ‘oh, my God the worst of all, the worst of all.’ I've never -- even baseball I don't think is getting as much passion with some of these people as the cabinet.

The CNN co-hosts were clearly amused by the trashy column. Berman chuckled over Collins calling Trump cabinet members “inept” and “incompetent,” and asked her to elaborate on that. She happily obliged, bashing Education Secretary Betsy DeVos as someone who was universally hated but luckily inept.

Camerota was eager for more names, gushing to Collins, “In your reality show model, who are readers saying is their favorite worst cabinet member?”

Collins said it was too soon to tell, before marveling again at how “wonderful” it was that the paper's readers detested the Trump cabinet so much:

"I will tell you the passion is really there. I'm just astonished at how much regular, normal people, get up in the morning and suddenly say to the world, ‘the secretary of the interior!’ It's wonderful. It's great that people care this much," she gushed.

Camerota oozed over the contest as if it was an act of patriotism: “Civic engagement, that's what you brought out here with the contest!” she cheered.

As he was wrapping the interview, Berman tried to get the Times' columnist to reveal who the “winner” of this “contest” will be.

Collins let her CNN fans know that someone who “drives everybody nuts” was probably going to win and she would let them know this Thursday.