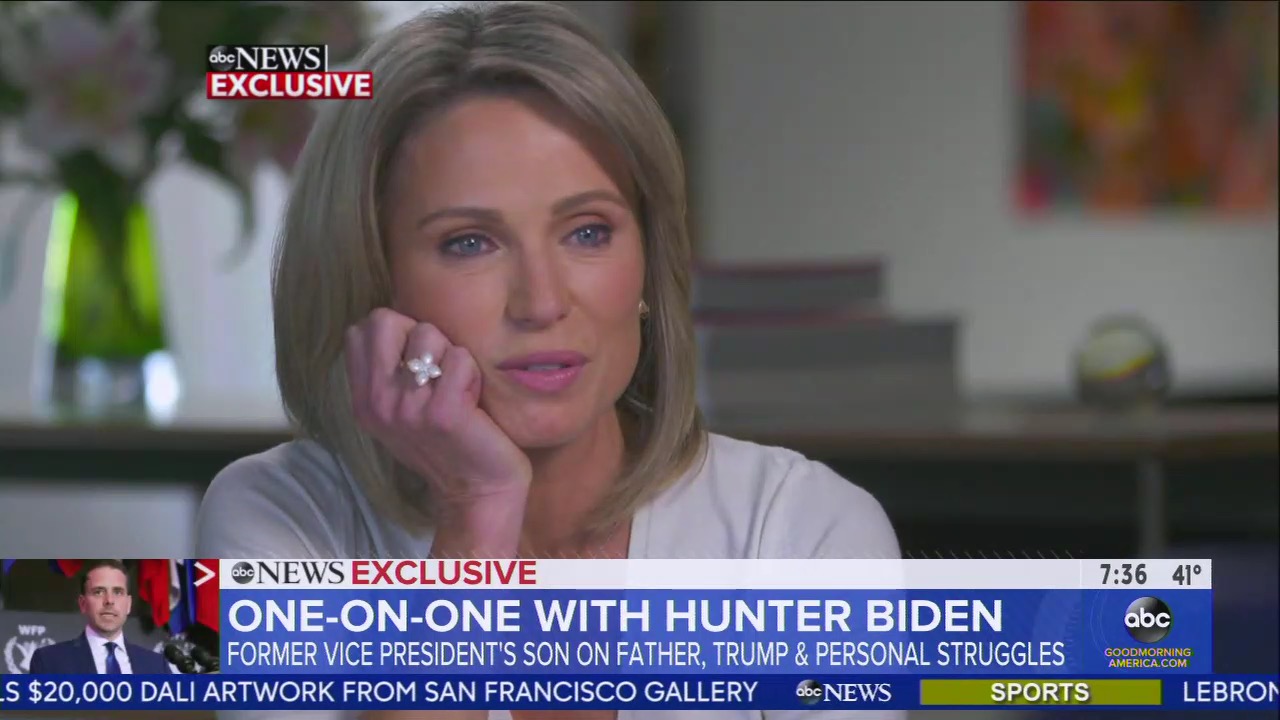 Hunter Biden, son of former Vice President and 2020 Democrat presidential candidate Joe Biden, gave an exclusive interview to ABC’s Amy Robach Tuesday, excerpts of which were shown on Good Morning America. Robach surprisingly held Biden’s feet to the fire over his cushy job with a Ukranian gas company while his father was Vice President, for a large part of the interview. However, that dissolved into a gooey sympathy piece about how mean President Trump was hurting Biden’s sobriety, finally culminating with Biden crying on camera about how much he loved America.

To her credit, Robach did extensively grill Biden about his work with the Ukranian gas company, Burisma, but mostly focused her attacks on Hunter hurting his father’s campaign. You can see all of the questions at the bottom in the transcript but here’s a small sampling of what she asked:

...What were your qualifications to be on the board of Burisma?

...You were paid $50,000 a month..If your last name wasn't Biden do you think you would have been asked to be on their board of Burisma?

...You said no one votes or will vote for or against my dad because of me. Do you still believe that?

...Do you think you’re a distraction to your father’s campaign?

...What do you say to people who believe this is exactly why people hate Washington?...

Throughout this segment, Biden was combative and defensive, very much acting offended, like his father, that the media would dare question him at all. After this last question, Biden erupted, asking, “Who says this?!”

Later in the interview, Robach shifted to sympathy for Biden, redirecting her blame onto President Trump and his supporters. After playing clips of Trump rallies, she brought up Biden’s battle with addiction. Trying to draw pity for Biden she asked what she called a “human question:” “Do you worry about all of this noise, even though its ‘just noise’, that it could affect your sobriety?”

Robach then invited Biden to give a message to President Trump, on-air, asking, “President Trump will likely see or at least read about this interview. Anything you'd like him to hear from you?”

As Biden humble-bragged he wasn’t going to say anything snarky because he “respected the office,” he turned on the water works. Robach softly asked, “Why do you think you're getting emotional?”

Again, that was just another opportunity for the son of President Trump’s rival to turn the tables and accuse Trump of ruining the office:

"Because I'm really proud of being an American.But I have to admit I take no pleasure in this watching this death spiral of this administration, this president and the people that surround him," Biden boasted.

Robach played right into it, actually inviting Biden to tell Americans how he wanted this controversy to end: “How do you think this will all play out in the history books?”

"Interesting to see when he got emotional," Robin Roberts praised.

"Can't wait to see more of that," Michael Strahan commented.

Click "expand" below to see the rest of the questions Amy Robach asked Hunter Biden on Good Morning America:

‘Where is Hunter?’ President Trump says you're in hiding.

I want to get to the heart of it. Did you and your father ever discuss Ukraine?

(After he says, no, she doesn’t ask about the picture of them all golfing together)

Your dad said ‘I hope you know what you're doing’ and you said ‘I do.’

When he said ‘I hope you know what you're doing,’ what did he think you were doing?

What were your qualifications to be on the board of Burisma?

You didn't have any extensive knowledge about natural gas or Ukraine itself, though.

In the list of the reasons why you're on the board you did not list the fact that you were the son of the Vice President.What role do you think that played?

If your last name wasn't Biden do you think you would have been asked to be on their board of Burisma?

Why did you leave the board in April?

You chose not to--why? This is your opportunity to say why.

Do I think that should be a rule across the board for any administration?

Do you regret being on the board to begin with?

I think people at home are thinking ‘how could that not have crossed your mind?’ like maybe this isn't a good idea to go and sit on the board of this Ukranian company -- At the time you never thought this might not look right?

The President has repeatedly said you received $1.5 million from China despite no experience and for no apparent reason. Obviously fact checkers have said that that is not true. Have you receive any money from non-business dealings? Not one cent? Definitely not 1.5 million.

We saw you in those photos getting off of Air Force two with your daughter, with your father. Did you talk about China or your deal with China? 12-hour flight? That never came up?

Your father did shake hands with Mr. Lee in the lobby.

Jonathan Lee. He was your friend and your business partner. So that meeting was not a mistake, was not unethical?

What do you say to people who believe this is exactly why people hate Washington? A vice president's son can make money in countries where your father did doing official government --

Do you think you're a distraction right now to your father's campaign?

Do you think it's perfectly fine that the Trump children have been criticized for doing similar sorts of business?

You said no one votes or will vote for or against my dad because of me. Do you still believe that?

Lock him up? Lock him up? [Robach referring to Eric Trump suggesting this chant about Hunter be added to Trump rallies]

[moving on to talk about Hunter Biden’s sobriety]

Do you worry about all of this noise, even though its ‘just noise’, could affect your sobriety?

President Trump will likely see or at least read about this interview. Anything you'd like him to hear from you?

Why do you think you're getting emotional?

How do you think this will all play out in the history books?