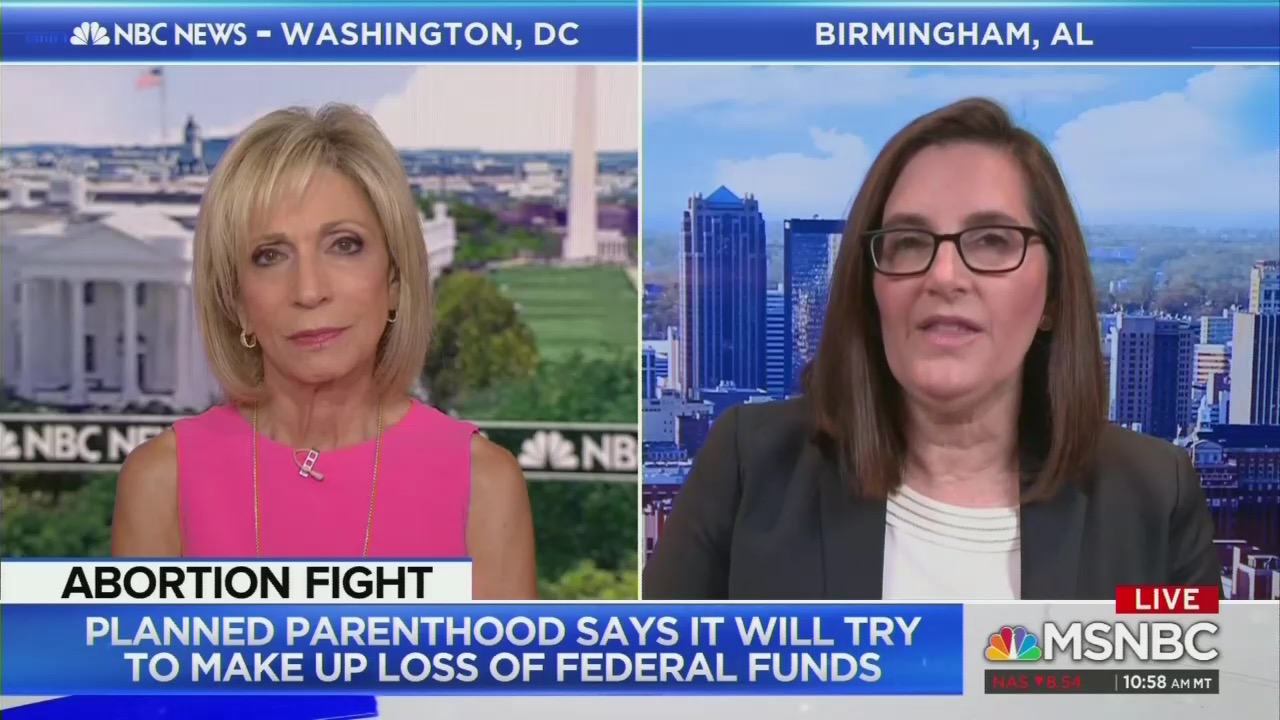 Tuesday afternoon MSNBC anchors spent their shows fretting that the largest abortion provider in the country that heavily contributes to Democrats was opting out of Title X government funding over an abortion gag order. Hosts Andrea Mitchell, Ali Velshi and Stephanie Ruhle whined that poor “non-political” women who “depended” on the abortion giant would lose access to “critical health care” because of the Trump administration.

First on Andrea Mitchell Reports, she set up the situation as dramatically as possible, calling it a “setback” for women’s rights and it was all the Trump administration’s fault:

In a major setback for advocates of women's reproductive rights, Planned Parenthood is withdrawing from Title X the federally funded program that helps largely underserved women get birth control, cancer, and STD screenings along with many other critical health services. It is all because of a gag order imposed by the Trump administration banning clinics that get federal money from providing abortion counseling.

Mitchell fretted to her liberal attorney guest, “Joyce, this is pretty dramatic and drastic because it affects the people least able to get other healthcare services. Those who are served by Planned Parenthood.”

Sounding more like an activist and less like a journalist, Mitchell wondered what “legal options” Planned Parenthood had against “increasingly conservative judges” appointed by President Trump.

She asked how the well-funded abortion giant was going to make ends meet: “What are the options now going to be, to raise money privately, to try to fill the gap for all of this federal money from title X?”

The interview ended with Vance complaining that Planned Parenthood would have to appeal to Democrats in Congress to “protect women’s rights” to get a “legislative fix” for Title X.

The hysterics continued the next hour on Velshi and Ruhle. The MSNBC hosts sympathetically interviewed the new acting president for Planned Parenthood, Alexis McGill Johnson, repeating Mitchell’s loaded language over how “critical” the abortion provider was for women who “depend” on it:

The program Title X is nearly 50 years old and pays for health services for poor women all over the nation. It's allowed Planned Parenthood to provide services to more than 1.5 million low-income women annually, including affordable contraception, cancer screenings and other critical health services...What does that mean to those low-income women who depend on Planned Parenthood?

The hosts followed up with similar questions asked by Mitchell earlier:

How do you make up for the money that Planned Parenthood may lose?

Do you see this as a temporary separation from title X? Could you re-establish ties, a relationship after President Trump and this administration is no longer in office?